Respiratory Syncytial Virus or RSV, is the most important respiratory organism of early childhood. 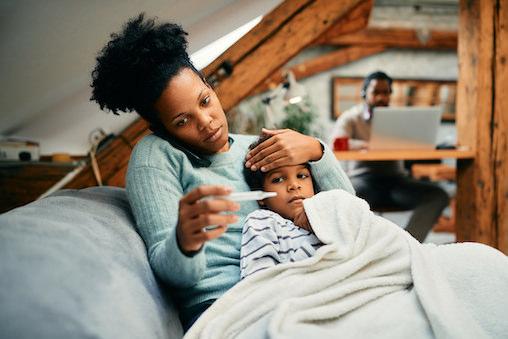 This is a question about an infant who is just three months old. The baby was hospitalized after having what appeared to be a cold or congestion. The baby was diagnosed as having some condition of the bronchioles, and it was determined to be a virus called RSV. The baby fortunately is better and out of the hospital, but I am curious as to what this virus was?
Utica, New York

It occurs throughout the world, and in each location it tends to occur in yearly winter outbreaks. In the northern hemisphere the peak of the epidemic is usually in January, February, or March, although in some years it may begin earlier and/or end later. Each year, around 100,000 infants are hospitalized with RSV in the United States alone. This year the epidemic has been particularly heavy (even in sunny California). The last several months have seen many, many children hospitalized with RSV.

The virus lives inside the cells lining the respiratory system, causing swelling of this lining coupled with the production of large amounts of excess mucus. In adults, this shows up as a bad, lingering cold with thick nasal congestion and a deep, productive cough. In infants, however, the excess mucus can be enough to plug their small airways or bronchioles, resulting in an illness called bronchiolitis that sometimes requires hospitalization. In fact, 75% of cases of bronchiolitis are caused by RSV.

Almost all children have had RSV by the time they are two years old. Children who first get it under 6 months of age (or who have serious underlying illnesses) are at the highest risk for severe disease and hospitalization. Thankfully, severe RSV infection is very uncommon in the first 6 weeks of life, since these babies still have antibodies from their mothers.

The time period from exposure to illness is usually about 4 days. Typically a parent, or more likely an older sibling who is attending school or daycare, comes down with a bad cold first. The disease spreads when infected droplets in the air or on the hands come into contact with a baby’s mouth or nose (it has never been shown to be passed from someone standing as far as 6 feet away). Then, the infant develops a runny nose and a red throat. Over the next 3 days or so the infant gets sicker. Symptoms include cough, wheezing, and sometimes a fever or an ear infection. In most infants, this is as severe as RSV gets. Some, though, will get progressively sicker with fast respirations (>60 per minute), difficulty breathing, and listlessness. The thick nasal secretions can make it hard for babies to eat and lead to dehydration, which can be dangerous. About 3% of infected infants get sick enough to require hospitalization.

The disease usually lasts a total of 5 to 12 days, and those who are infected are generally contagious during this time

How do you know your child has RSV?  There is a simple nasal swab test that can be done. Most commonly, RSV is diagnosed clinically and treatment consists of alleviating the classic symptoms. Use a cool-mist humidifier to help break up thick congestion and mucus in the chest and nose. Keep your child comfortable by providing adequate hydration and a place to rest. Avoid visitors to help prevent further spread of the virus. If your baby has a fever or these at-home treatments are not working, then it’s time to visit your pediatrician for further examination and treatment recommendations.

Hospitalization for RSV may be required if the infected infant or toddler is breathing very fast, requiring supplemental oxygen, and/or getting dehydrated even with at-home treatments.  Treatments in the hospital consist of supplemental oxygen (generally done by a nasal cannula and in rare cases, a breathing tube), deep suctioning of mucus, and IV fluids to improve hydration. Antibiotics do not help with this virus. In general, hospital stays are a couple of days and uncomplicated, and the prognosis is very good.

Children who are sick enough with RSV to come to medical attention may have an increased chance of recurrent wheezing or reactive airway disease later in life. This is more likely if the child has other risk factors such as eczema or if there is asthma in the family. The older a child is (over the age of 1) with severe RSV, the higher the likelihood that the child eventually will be diagnosed with asthma.

In 2019, a retrospective cohort study was done in Australia that showed a correlation between severe RSV disease and a later increased chance of developing asthma or wheezing requiring hospital-based treatments in children. A study in the January 2000 issue of Pediatrics described a simple blood test that might predict which children are most likely to go on and develop asthma. The study looked at children sick enough to be hospitalized with RSV. Those who had a high eosinophil count had a 56% chance of developing asthma. The others with severe RSV had only a 22% chance. While RSV and asthma certainly go together, even with severe RSV and a high eosinophil count, there is a good chance of avoiding asthma altogether. It is still not known whether the virus damages the respiratory system thus causing the asthma, or if people’s susceptibility to asthma predisposes them to severe RSV. I suspect that it is a little of both.

The best way to prevent RSV is good hand washing, especially before touching your face, and particularly just before handling susceptible infants. Use a tissue when you cough or sneeze. Clean and disinfect surfaces that people often touch, as RSV droplets can live on surfaces for several hours. If possible, avoid exposure to sick individuals during the peak of RSV season.

In certain high-risk and vulnerable populations, there is a medication that infants can take to help prevent severe RSV disease. This medication is called palivizumab (Synagis), and it is composed of specific monoclonal antibodies against RSV. It is given as a monthly dose during the height of RSV season. This is not for the majority of children and is only approved for the infants at highest risk of severe disease and hospitalization. It is not a cure or treatment for RSV.  Scientists are working on a RSV vaccine, but currently there is not one available.

Although those who have been infected develop some antibodies to RSV, most individuals are susceptible again by the next annual outbreak. Subsequent infections, though, are usually both less common and much less severe. Only about 15% of children over the age of 2 will have a case of RSV in each epidemic.

I am very glad that your 3-month-old is doing better. I would recommend avoiding respiratory irritants (such as cigarette smoke), and ensuring good nutrition (particularly vitamin A — which is thought to have a healing effect on the respiratory lining). And keep in mind, this will pass and his immune system will have built up important antibodies.

Last medical review on: November 21, 2022
About the Author