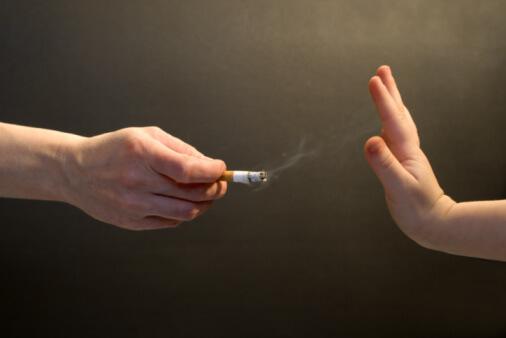 We live in a condominium with our two daughters, ages 15 months and 4 years. I am concerned with the level of secondhand smoke we are receiving from our neighbors. Frequently we notice our home smelling strongly of cigarette smoke. We open windows, doors, turn on fans (not so convenient with the frigid spring we are having) and I just would like to know if our kids are being exposed to a risk since the smoke is entering through our filtration system and what we might be able to do about it if they are, since asking our neighbors not to smoke in their own home seems highly doubtful.
Thanks.
Jennifer Moore - Indianapolis, Indiana

You are wise, Jennifer, to be concerned about the effects of secondhand smoke. Many people think of passive smoke exposure as a minor issue, and that those who are concerned are being a little extreme. The truth is that the inhalation of secondhand smoke is a major health concern. By measuring blood levels of cotinine (a breakdown product of nicotine), investigators have been able to quantify the extent non-smokers inhale tobacco smoke. Cotinine levels in spouses and children of smokers can even overlap the levels found in smokers themselves.

Nicotine isn’t the only dangerous chemical found in the bodies of people exposed to secondhand smoke. Disease-causing polycyclic aromatic hydrocarbons reach their highest concentrations in sidestream smoke, and have a huge effect on non-smokers.

Exposure to secondhand smoke has been strongly linked with a higher incidence of asthma, respiratory infections (including pneumonia), and ear infections in children. Children exposed to passive smoke are hospitalized more frequently, and have a higher chance of dying from Sudden Infant Death Syndrome (SIDS).

The impact of secondhand smoke is so large that it masked the effect of active smoking in many studies. In 1996, the American Journal of Epidemiology published an important article that for the first time strongly linked cigarette smoking with breast cancer. Earlier studies had simply divided women into smokers and non-smokers (lumping those exposed to passive smoke in with non-smokers). No significant difference in breast cancer risk was found in the previous studies.

In the 1996 study, three groups were followed: women who smoked, women who had been exposed to secondhand cigarette smoke for at least an hour a day for a year, and those without cigarette-smoke exposure. The relative risk for women who smoked cigarettes, depending on how much they smoked, was found to be between 2.2 and 4.6 (they were 2.2 to 4.6 times as likely to develop breast cancer).

The relative risk from passive smoke (primarily girls whose parent smoked or women whose spouse smoked) was 3.2! According to this study, this would make passive smoking a more important risk factor than having a mother with breast cancer (2.1), or having an early first period (1.3), or having a late first pregnancy (1.4). Parents who smoke are not only endangering their own health, not only increasing their children’s risk of (relatively) minor problems such as ear infections, asthma, and pneumonia, but may also be unwittingly making their daughters more than three times more likely to get breast cancer.

Since 1996, many more studies have been done looking at an association between passive smoke and breast cancer. In 2005, the California Environmental Protection Agency released a report based on a systematic review of the literature regarding the effects of secondhand smoke, “Proposed Identification of Environmental Tobbaco Smoke as a Toxic Air Contaminant.” The report found that there was an increased risk of breast cancer with secondhand smoke in younger, primarily pre-menopausal women. In addition, the report found detrimental health effects in multiple areas: developmental (low birth weight infants, SIDS), respiratory (asthma, pneumonia, ear infections), cancer (lung/sinus as well as breast cancer), and cardiovascular (coronary heart disease, included increased risk of death).

Thankfully, there are ways to minimize the amount of secondhand smoke your daughters inhale. Although not having active smoking in the same room greatly reduces the amount of exposure, as long as you can smell the smoke, you and your daughters are being affected. Masking the odor with air fresheners does nothing to help. Plenty of real fresh air is quite helpful, but as you mention, often impractical. The filtration systems found in most buildings, unfortunately, are not sufficient.

Adequate filters are available. You can buy or rent a HEPA filter (a type of filter that efficiently removes 99.97% of particles from the air). These are expensive, but very effective (they also reduce allergy symptoms). The HEPA filter is ideally placed in the rooms where people sleep. Less expensive, but quite helpful, are houseplants. Plants take in the contaminated air and then release oxygen. A former member of the Surgeon General’s office (and expert on tobacco) has also suggested a fresh coat of paint. Tobacco residue clings to the walls and surfaces. The combination of cleaning and painting can give your condominium a fresh start.

Ordinances are being considered in a growing number of cities to protect people who live in apartments, condominiums, and other “multi-family” homes from secondhand smoke. For more information, contact your local city council or county department of health. In California, several cities such as Calabasas have such ordinances in place and other cities are considering them (For more information, visit: www.cityofcalabasas.com/secondhandsmoke.html and www.no-smoke.org).

Those parents who are reading this who do smoke can give an invaluable gift to their children by stopping. I understand that tobacco can be a real addiction and that stopping can be a monumental task. In California, the Department of Public Health has free services available to help people quit at (800) NO-BUTTS. More options are available through the American Lung Association at http://www.lungusa.org/stop-smoking. For all of us, minimizing our children’s exposure to smoke is well worth the effort and expense.

Last medical review on: December 09, 2010
About the Author