Fevers in children can be scary. Fevers in a child signals to us that a battle might be going on, but the fever is fighting for the child, not against. 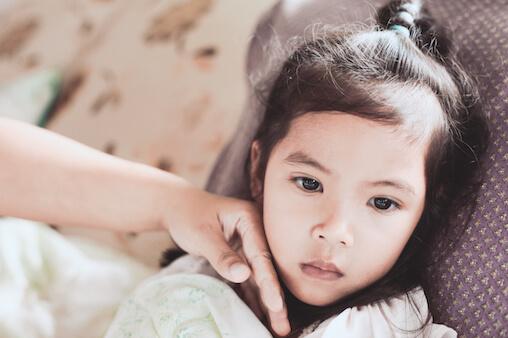 Our child is 14 months old. His temperature was up to 103 degrees. What are the best things to do before having to go to the doctor, and at what temperature does it become critical? What are the recommended fever reducing drugs for children?
Lianna Walden - Vancouver, British Columbia

Not very long ago — when my parents were children — a high fever in a child could mean there was a serious, untreatable condition. Today, most of the devastating illnesses causing these high fevers are either treatable (thanks largely to antibiotics), or better yet preventable (thanks largely to vaccines). Nevertheless, for generation after generation on our planet, a high fever in a child was a chilling terror to the parents. Fever as an enemy is deeply ingrained in our cultural memory.

I was surprised to learn in medical school that fever, far from being an enemy, is an important part of the body’s defense against infection. While a fever in a child signals to us that a battle might be going on in a child’s body, the fever is fighting for the child, not against.

Most bacteria and viruses that cause infections in humans thrive best at 98.6 degrees F (37C). Raising the temperature a few degrees can give the body the winning edge. In addition, a fever activates the body’s immune system, accelerating the production of white blood cells, antibodies, and many other infection-fighting agents.

Cold-blooded animals adjust their temperatures by moving to a different spot. While a medical student, I sat fascinated as I learned that lizards, when infected, will move to a warmer place to give themselves a fever. If they are prevented from finding a warmer spot, they will likely die.

How many infections are too many?

Many parents fear that fevers will cause brain damage. Brain damage from a fever will not occur unless the fever is over 107.6 degrees F (42C) for an extended period of time. Many also fear that untreated fevers will keep going higher and higher, up to 107 degrees F or even more. Untreated fevers caused by infection will seldom go over 105 degrees unless the child is overdressed or trapped in a hot place. The brain’s thermostat will stop the fever from climbing above 106 degrees F. Some parents fear that fevers will cause seizures. For the great majority of children this is not the case. About 2.5% of young children, though, will sometimes have seizures with fever. These febrile seizures are caused by rapid increase in temperature, not necessarily by the height of the temperature. Once a child already has a high fever, a febrile seizure is unlikely with the current illness. In any event, simple febrile seizures are over in moments without lasting consequences.

What Temperature Constitutes a Fever?

While 98.6 degrees F is considered the normal core body temperature, this value varies between individuals and throughout the day. The daily variation is minimal in children less than six months of age, about 1 degree in children 6 months to 2 years old, and gradually increases to 2 degrees per day by age six. A person’s baseline temperature is usually highest in the evening.

So where is the best spot to measure your child’s temperature? This depends on the age and level of cooperativity of your child. For an infant or child who cannot hold a thermometer under their tongue, an ear measurement will provide a good starting place and is accurate if done properly. However, it may need to be confirmed by a rectal temperature if there is concern that the child is seriously ill. For older children, measuring under the tongue (oral temperature) provides a good accurate measurement of body temperature. And although you may have a parent’s intuition about fever (which can often be correct!) it is not accurate to measure temperature by feeling a child’s forehead. This method is highly dependent on your own temperature. Pacifier thermometers and fever strips on the forehead are okay for screening, but are not accurate enough for measuring a true fever.

When and How to Treat Fevers in Children

A fever does not necessarily need to be treated. If a child is playful and comfortable, drinking plenty of fluids, and able to sleep, fever treatment is not likely to be helpful. Steps should be taken to lower a fever if the child is uncomfortable, vomiting, dehydrated, or having difficulty sleeping. The goal is to bring the temperature between about 100 and 102 degrees F — not to eliminate the fever.

When trying to reduce a fever, first remove excess clothing or blankets. The environment should be comfortably cool (one layer of lightweight clothing, and one lightweight blanket to sleep). Two medicines are useful for reducing fever in children: acetaminophen (Tylenol) and ibuprofen (Children’s Advil or Motrin). Acetaminophen is given every 4-6 hours, and works by turning down the brain’s thermostat. Ibuprofen is given every 6-8 hours and helps fight the inflammation at the source of the fever. It is not approved for children under 6 months. Both medicines may be given for stubborn fevers, but be very careful about using the correct dose of each. Do not use any anti-fever medications for children under three months of age without first having the child examined by a physician.

A lukewarm bath or sponge bath may help cool a febrile child (after medication is given — otherwise the temperature bounces right back up). Cold baths or alcohol rubs cool the skin, but often make the situation worse by causing shivering, which raises the core body temperature.

During a fever, it is also very important to keep your child well hydrated.  Children may not be hungry and that is okay, but you should ensure they get adequate fluids in the form of water, breastmilk, or formula.  You may also offer things like popsicles, broth, and oral rehydration solutions like Pedialyte to help with hydration.  If your child is refusing any form of hydration for a couple of hours, it is worth a call or visit to your pediatrician.

Fever is a signal that something is going on in your child. Usually, this is a minor illness, but it can be a serious infection, such as meningitis. Any child less than 90 days old with a fever >100.4 degrees F should be examined by a physician right away, to rule out a serious infection. Children of any age who have a fever >104 degrees F should also be seen, unless the fever comes down readily with treatment and the child is comfortable. Any child who has a fever and is very irritable, confused, has difficulty breathing, has a stiff neck, won’t move an arm or leg, or who has a seizure should also be seen right away. Also, if you have serious concerns about your child’s condition for any reason, do not hesitate to contact your pediatrician or to seek medical attention for your child.

Even without obvious symptoms, children under 6 months of age with a fever should be examined by a physician within 24 hours, since they may have some infection that needs to be treated. Older children with a fever (6 to 24 months old) who are acting well and have no other symptoms should be seen if the fever lasts 48 hours (or 72 hours if they do have minor cold or flu symptoms).

While caring for your son with a fever, remember the shadows of the many generations before ours when a fever would break a mother’s heart. The fever was the body’s desperate attempt to save the child. Remember now that fever is a friend — alerting us to potential problems, activating the immune system, and fighting bacteria and viruses.

Sullivan JE,  The Section on Clinical Pharmacology and Therapeutics and Committee on Drugs. Fever and antipyretic use in children. Pediatrics. 2011;127(3):580-587.