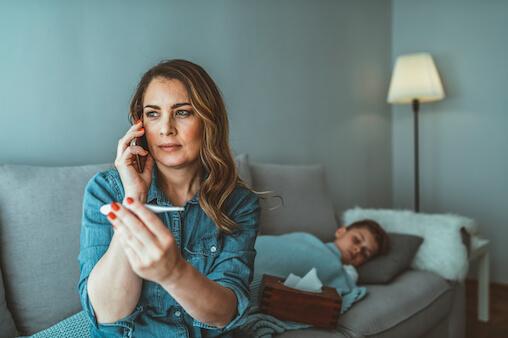 Dr. Greene, my 16-month-old son died of complications of bacterial meningitis on 17 December 1997. Up until 14 Dec he was healthy. He got sick on Sunday, 14 December 1997, we took him to the pediatrician on Monday the 15th, where she said her diagnosis was an intestinal virus. We took him home, he kept throwing up, but the doctor said this was OK. We took him in on Wednesday the 17th with a 104 degree fever in the early AM, and while waiting for a bowel x-ray, my son went into a seizure, we rushed to the ER one floor below, and my son later died in the pediatric intensive care unit. The doctor in the PICU said the cultures later showed pneumococcal bacteria had caused sepsis in his blood, and a CAT scan had shown that his brain was full of a fluid the doctor interpreted as blood or pus. My questions are many, but I have spoken to several doctors who are personal friends... they all say this is basically a crap-shoot kind of situation, where 100 kids can go to the doctor with the same symptoms, and 99 will have a virus in their intestines, and the one will have bacterial sepsis or meningitis. Is there any way we could have known? Everyone says no. Once they realized in the ER what was happening, it was too late to save him, the damage was done. He also died with the purple spots on his arms and torso, which, I am told, indicated advanced sepsis. Is there anything that you can tell me about this situation?
P.S. We bought your book on ear infections a few months ago. Liked it a lot, plan to use it for the next kids.
Neal Woodall - Shreveport, Louisiana

Neal, even just hearing about the gaping wound of having your precious son so rudely wrenched from your life creates a deep ache in me and in many parents who will read this. How wrong that the exuberance of a 16-month-old toddler, careening joyfully through life, should be extinguished. Promise and dream vanish. The fragility of life, which hides beneath the surface of our awareness, has now put questions to everything.

This week, Neal, I stood next to bed 5 in the Pediatric Intensive Care Unit at Children’s Hospital Oakland. Dwarfed by the stacks of monitors and machines, an 11-month-old named Connor lay stretched out on the tiny bed. He too had been perfectly healthy until quite recently.

Connor is a miracle baby. When his parents finally came to understand that they couldn’t have a baby, they adopted a beautiful little girl. Three months later, they were pregnant with Connor. With two infants in the house, life was hectic but wonderful.

Then, one night, Connor developed a high fever. When his parents were unable to bring the fever down with medications, they appropriately took him to the ER in the middle of the night. At the ER, the appropriate lab tests were performed, and the initial results indicated a viral infection that didn’t look serious. When they went home from the ER that night, they didn’t know that it would be their last trip home – at least to the simple joy that they had known.

The next morning when they took Connor back to be checked by the pediatrician, he had become lethargic. The doctor called 911 to have him transported directly to the hospital, where he was diagnosed with bacterial meningitis. Despite swift intervention with the best medicines, he hovered between life and death for days and nights on end. Seizures and strokes complicated his course, and when the pneumococcal meningitis was finally gone, it wasn’t clear how much damage had been done to his brain.

He was transported to Children’s Hospital Oakland to have a gastrostomy tube placed. This tube was to be surgically inserted through the wall of his stomach so that he could be fed during the many long, slow months of rehabilitation.

Then, this Thursday, without warning he began seizing uncontrollably, a CT scan revealed massive fluid in the brain, and he was rushed to the operating room to have a shunt placed to remove the fluid. I arrived at his bedside as Connor was recovering from the emergency surgery, only to hear a doctor explaining the situation to Connor’s mother and grandmother.

“The little boy that you have known and loved is gone,” the doctor advised, “it’s time to let go of him, and learn to love this new, very different, Connor.” My heart ached as I listened.

Truth be told, it is far too early to know the end of Connor’s story. When pneumococcal meningitis hits, some children recover (even with as many complications as Connor has had). Some are left with serious brain damage. Many lose their hearing (Ian, another delightful little boy I know, is permanently deaf following his pneumococcal meningitis this fall). And some, like your son, have their lives cut short suddenly. Whatever the outcome, bacterial meningitis rolls through like a juggernaut, smashing health and peace.

Who Gets Bacterial Meningitis?

Bacterial meningitis can occur at any age, but 95 percent of cases are in children under 5 years old. Boys are more likely to get it than girls. Together, three types of bacteria account for over 90 percent of bacterial meningitis: H. influenza type b, meningococcus, and pneumococcus. These bacteria are transmitted by person-to-person contact through respiratory secretions. Many people carry these bacteria with no serious consequence (pneumococcus, for instance, is the most common cause of ear infections) — but a few get very sick (pneumococcus causes meningitis in about 3 per 100,000 people). (Textbook of Pediatric Infectious Disease, Saunders 1998)

Bacterial meningitis strikes in two common ways. Sudden onset meningitis features shock, internal bleeding, purple spots, and reduced consciousness at the very outset, with a rapidly progressive course often resulting in death within 24 hours. More commonly, meningitis begins with several days of upper respiratory symptoms or gastrointestinal symptoms. Most children have high fevers, severe headaches, and poor feeding. They may also have muscle aches, nasal congestion, vomiting, neck stiffness, and seizures. Children with meningitis become increasingly irritable and/or lethargic. The presence of petechiae (purple spots that indicate internal bleeding) is a sign that the infection may be raging out of control.

Even though your son began having some symptoms three days before his death, there was no reason to expect that it was anything more serious than a common virus. By the time specific signs and symptoms appeared, the battle was already lost. How many “what ifs” must go through your mind! But I cannot think of anything you or your doctors should have done differently. Pneumococcal meningitis is a devastating disease. Of all causes of meningitis, it is the most likely to have a bad outcome (Pediatric Infectious Disease Journal, May 1993). And the overuse of antibiotics is resulting in increasingly resistant strains of pneumococcus every month.

When I was a pediatric resident, H. influenzae Type b (HIB) far surpassed all other causes of bacterial meningitis in frequency. In 1991, a vaccine against these bacteria was incorporated into the routine immunization schedule beginning at 2 months of age. The amount of meningitis plummeted. Arkansas Children’s Hospital had about 27 cases of HIB meningitis per year in the 1980’s before the vaccine was used. By 1993 the number had dropped to only 1.7 per year (Southern Medical Journal, Jan 1994). Since the HIB vaccine was introduced, the incidence of invasive HIB disease has dropped by 99% to fewer than 1 case per 100,000 children under 5 years old (Red Book 2006). This dramatic result is typical wherever that vaccine is used.

Fortunately, there is now a vaccine to pneumococcal bacteria as well. The vaccine has been shown to decrease the risk of all invasive pneumococcal infections (i.e., meningitis and blood infections) by about 80% in children under 2 years of age. There has also been a decrease in the incidence of invasive pneumococcal infections in older children and adults (Red Book 2006). Since 2000, the pneumococcal vaccine for infants (also called Prevnar) has been recommended by the American Academy of Pediatrics for all children less than 2 years of age. Vaccination of children between 2 and 5 years of age may also be considered on an individual basis. More information about the vaccine can be found at www.aap.org/advocacy/archives/junpcv7.htm and www.cdc.gov/mmwr/preview/mmwrhtml/mm5001a3.htm.

A meningococcal vaccine is also available, but is not routinely recommended for young children. It should be considered, though, for those heading off to live in dorms or barracks.