Could it be a Seizure? 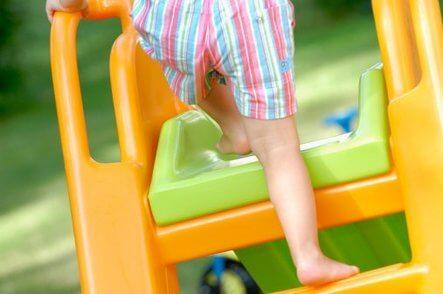 Dr. Greene, my nephew's 2-year-old fell shortly after learning to walk and was unconscious for a short time. She was seen and was found to have mild concussion. Since that time she has bumped her head on a few occasions. When this happens she becomes rigid and unresponsive for about 30 seconds and then goes limp. Shortly thereafter she begins to respond. About 8 weeks ago she began to limp. The limp has progressed to dragging her left foot. Their family doctor suspected some kind of bone disease and has done a full set of X-rays with no findings. She is scheduled for a bone scan. She has no pain and continues to be very active. I think they should be looking at her head rather than her legs. A friend has suggested ongoing, cumulative bleeding on her brain or a scare as the possible source of the problem. They are frantic! Please Help!
Burke Mays - Franklin, Tenessee

These could be seizures. Normally our brains coordinate the intricate affairs of our bodies with an orchestra of electrical impulses. Occasionally this harmonious energy is interrupted by the clash of many brain cells sounding off at once in a disorganized storm of electro-chemical noise. This burst of simultaneous, contradictory signals is called a seizure or convulsion. The seizure impulses override the normal functioning of the brain. Over 3 percent of children will have a seizure before the age of fifteen.

When most people think of seizures, they picture rhythmic jerking movements of the arms and legs. Seizures can look like this image, but can also have many different appearances depending on which brain cells are affected. Often the actual appearance of a seizure is so different from what people expect that the diagnosis of seizure is missed.

Seizures are classified as generalized or partial depending on how much of the brain is involved (International Classification of Epileptic Seizures, 1981). Seizure activity seizes control of normal brain function. Some partial seizures affect areas of the brain that direct movement; others stimulate areas of the brain that perceive reality or that regulate the body’s internal functions.

Sensory seizures are more difficult to detect. An explosion of activity in the auditory centers of the brain might cause someone to suddenly hear things that aren’t there. If the seizure is in the back of the head, all manner of visual disturbance might occur, from temporary blindness, to flashes of light, to complex visual hallucinations. Auditory or visual hallucinations might even be misdiagnosed as schizophrenia or some other mental illness.Olfactory seizures, in which people smell aromas that are not present, may be either pleasant or revolting. Gustatory seizures, with bursts of taste sensation, are rare.

Suddenly the world starts to spin out of control, and you are falling. Paroxysmal vertigo is another type of partial seizure. Terror!!! Seizures in primitive reaches of the brain can produce states of absolute fear. Or states of vague anxiety can be partial seizures. Hopelessness :^( Seizures in the limbic system of the brain can produce spasms of depression — or the sensation of total well-being.

Sometimes partial sensory seizures are as subtle as periods of numbness, discomfort, or pain in parts of the body. Sometimes, rather than creating new sensations, they merely distort those that are already there.

Many of the symptoms that can be produced by partial seizures are common. Only when they are triggered outside the normal pathways of brain function are they seizures. The potential for each of them is, after all, present in each of our brains.

Generalized seizures are disruptions of both sides of the brain at once, and as a result, usually include an impairment or loss of consciousness. The classic tonic-clonic or grand mal seizure would be difficult not to notice. The individual suddenly loses consciousness, sometimes emitting a piercing cry or haunting moan. The eyes roll back in the head; muscles throughout the face, trunk, and limbs become rigid in a tonic contraction. The person falls, unprotected, to the ground. Often the tongue is bitten. More frighteningly, breathing stops and the person begins to turn blue. Sphincter control is lost; urine and sometimes stool are passed. This tonic phase usually lasts for tens of seconds. As the clonic phase begins, the muscles relax and then contract again with rhythmic jerks. It is not uncommon for this phase to last for 30 minutes or more. When the generalized tonic-clonic seizure is finally over, the entire body relaxes, and the person is unconscious.

Absence or petit mal seizures, by contrast, are often nothing more than brief, motionless, blank staring into space. The head may fall forward slightly and the eyelids may flicker, but the effect is undramatic. After absence spells the people immediately resume whatever they were doing or saying just before the seizure interrupted them. They don’t even notice the pause.

The story of your nephew’s 2-year-old reminds me of one of the other types of generalized seizures — atonic seizures. Here the affected person usually has a sudden increase and then loss of muscle tone, leading to a complete or partial collapse. These are often called “drop attacks.” The unprotected falls can easily result in injury in the head or body.

Although you suggested that falls begin her episodes, it is possible that seizures begin each event. People might not notice the seizures until she topples.

The most common cause of seizures in childhood is the rapid onset of a high fever. Febrile seizures, while very frightening to parents, are not dangerous.

Infections of various types (especially meningitis) are the other common known cause of seizures. Other less common causes include drugs, toxins, brain tumors, strokes, neurologic syndromes, altered blood sugar levels (too low or too high), or abnormalities of blood levels of sodium, calcium, or magnesium.

Epilepsy is defined as recurrent seizures unrelated to fever or identifiable acute damage to the brain. Somewhere between 0.4 and 1 percent of people have epilepsy, making it about as common as diabetes (Pediatric Epilepsy, Demos Publishers, 1993).

How Do You Tell If It Is Seizures?

Often the story is compelling enough to clinch the diagnosis of seizure. When this is not the case, the hallmark test is the electroencephalogram or EEG. This painless, non-invasive test simply records brain waves to look for abnormalities. A positive test can make the diagnosis. A negative test though, unless it happens during the event, can’t completely rule out a seizure. Sometimes the situation that triggers the event is reproduced to try to capture it on video and/or EEG.

From what I’ve heard it sounds to me that this girl’s pediatrician might need to consider an EEG, as well as either a head CT or an MRI to look inside this little girl’s brain. You are wise to suspect that the cause of these falls is not in the bones. And, whatever turns out to be going on, an unexplained limp in a child should be investigated thoroughly.