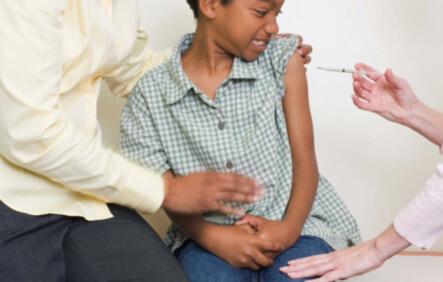 I am currently trying to assess whether or not to vaccinate my 15 month old and 3 year old for chickenpox. Can you give me the pros and cons? What are you recommending to your patients? Everyone I talk to seems to have a different opinion.
Leslie Jacobs - San Carlos, California

Children who do not get the vaccine are likely to develop chickenpox. This common viral infection is usually mild and not life-threatening. Although these children may be miserable for several days, and miss a week of school or day-care (stranding parents at home), they will likely recover from the 250-500 itchy blisters with nothing more to show for it than a few small scars. Each year, however, about 200,000 of the millions of people who contract chickenpox become seriously ill with complications such as pneumonia or encephalitis (inflammation of the brain). About 2,000 of these people die. Those who are at higher risk for complications include those with an already weak immune system, those with eczema or other skin conditions, adolescents, and adults.

How effective is the Chickenpox Vaccine

Fortunately, the vaccine is over 90% effective in preventing severe chickenpox. According to the Centers for Disease Control and Prevention (CDC), more than 3.5 million cases, 9,000 hospitalizations, and at least 100 deaths each year are prevented by the vaccine. Vaccinating children also protects vulnerable groups in our population who are unable to receive the vaccine.

Adults who get chickenpox usually have a much more severe, prolonged case than children. Pneumonia is common. The rate of hospitalization for chickenpox is almost 900% higher in adults than in children. Adults are more than 20 times more likely to die from this disease. Pregnant women face the additional fear of serious, even fatal, damage to the baby developing within. Clearly it is beneficial to prevent chickenpox in adults.

Other Benefits of the Chickenpox Vaccine

The other major benefit of the vaccine is an economic one. The vaccine reduces the costs related to the disease, including the costs of missed work, school, and child-care. This economic factor is a major force in the drive for universal immunization in the United States.

The American Academy of Pediatrics currently recommends two doses of the chickenpox vaccine. Typically, the first dose of the vaccine is given at 12 to 15 months of age and the second at 4 to 6 years of age (at school entry). Older children who have not received two doses of the vaccine can receive their catch-up shots 28 days apart.

What are the risks of the vaccine? For each individual, the vaccine seems quite safe. A chickenpox vaccine was developed in Japan in 1974. It has since been given to millions of people, with a good track record of safety. A similar vaccine has been in use in the United States since the early 1980s. There is no thimerosal or other preservatives in the vaccine. Reported adverse effects are generally mild — soreness, swelling, or a rash (at the injection site), and fever, tiredness, or fussiness are the most common. The vaccine is not recommended for immunocompromised people, or for pregnant women.

For the environment, there is the potential risk that if chickenpox — an old, familiar opponent with which we have developed a stable relationship — were eliminated, this might create a niche in the microscopic environment for a new, unknown, potentially more virulent, human virus.

The bottom line: The benefits of the vaccine seem to me to outweigh the risks.

Before the vaccine became available, my three oldest children suffered through the chickenpox. Once it was offered to the general public, I chose to give my youngest child the chickenpox vaccine simply because we live in an area where the immunization is widespread, and I felt it was in his best interest to be vaccinated.

Last medical review on: February 07, 2021
About the Author