Propionic acidemia can be a devastating condition; but with careful treatment, it is sometimes possible to reach adulthood successfully and even have babies. 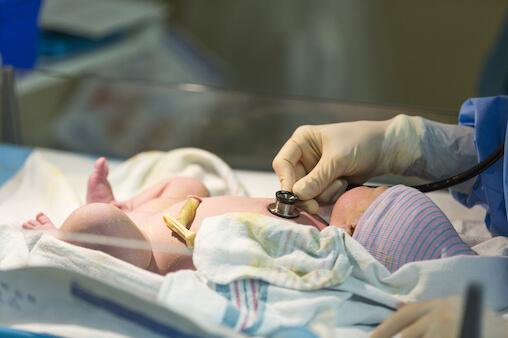 Some friends of mine recently had a baby who was diagnosed with Propionic Acidemia. Apparently this means that the baby cannot digest protein. The parents have talked with the doctors extensively about what they can do to help at home, life expectancy, etc., but they are consistently told that all cases are different and there's no way to know what to do. Apparently it comes from a mutated (or recessive maybe?) gene that has to exist in both parents for the disease to appear in the child. I don't think children with this disease live very long, nor do they develop mentally like healthy children. I think the oldest living person with the disease is 18. Any help you might provide would be greatly appreciated.Thanks in advance for your time.
Alli - Stockton, California

Propionic acidemia (PA) can be a devastating condition; but with careful treatment, it is sometimes possible for people with the disease not only to reach adulthood successfully but even to get pregnant and deliver healthy babies!

But for parents whose children have PA, the first weeks after the symptoms appear seem like a surreal nightmare. Rather than little bundles of joy, or fussy bundles of colic, these children are floppy, weak, and fail to gain weight. Most often the children get increasingly lethargic and don’t have those wonderful, quiet, alert moments where baby and parent can connect. These symptoms generally begin to appear within the first couple of days of life. Up to 30% of infants may suffer from seizures, and almost all suffer from poor growth and dehydration. Most often the diagnosis is made within a few weeks of birth.  The diagnosis is important because, without quick interventions,  the situation can deteriorate, leading to seizures, heart arrhythmias, coma, and death.

PA is what we call an inborn error of metabolism. Our bodies use detailed blueprints (our genes) to guide the manufacture of the proteins and enzymes we need to carry out the processes of life. Errors in these genes can lead either to a lack of necessary proteins or to the accumulation of toxic substances.

Most mutations in these genes cause no problem; they are just differences that set individuals apart. But more than 100 known single-gene changes do produce disease. Each of these inborn errors of metabolism is rare, but taken as a group, the conditions are fairly common. They range from very mild to quite severe. Even some of the worst can be successfully treated with something as simple as a dietary change. Others are relentlessly fatal.

Some of my most heart-rending experiences as a physician and as a friend have been watching the devastation caused by inborn errors of metabolism.

Inborn errors of metabolism should be suspected (and often aren’t) in any child with persistent vomiting, failure to thrive, lethargy, abnormal muscle function or tone, unexplained seizures, neurological deterioration, or developmental regression-especially in the absence of obvious congenital anomalies. A family history of a similar condition, a peculiar odor, or physical changes such as a large liver or spleen should also lead one to consider inborn errors.

Every time we eat food that contains protein, our bodies use a series of enzymes to break those huge foreign protein molecules into small pieces. These then become the building blocks we reassemble to form the specific human proteins we need.

In people with PA, there is an insufficient supply of one of these enzymes (propionyl coenzyme A [CoA] carboxylase), caused by a mutation or abnormal changes in the PCCA and PCCB genes. There are over 70 different mutations that may cause the disease, and the severity of symptoms are based on how much working enzyme there is. Without the propionyl CoA carboxylase enzyme, there is a bottleneck in protein processing. Propionic acid builds up in the blood. This is known to damage the lining of small blood vessels, allowing the propionic acid to leak into the brain and nerve tissues, where it alters behavior and development. Ammonia also accumulates in the blood. This too can damage the brain. Food that is meant to nourish becomes a poison.

Propionic Acidemia is inherited in an autosomal recessive fashion, meaning affected persons carry one abnormal gene from each parent.  If you were to inherit one functional and one abnormal gene, you would be a carrier for the disease and likely not show symptoms. The risk of two carrier parents to have an affected child is 25% for each pregnancy.  PA affects males and females equally. The prevalence is about 1 in 100,000 to 200,000 in most regions of the world.  It is highest in the Greenlandic Inuit population; the rate there is thought to be about 1 in 1000.

More Than One Form of Propionic Acidemia

There are two recognized forms of PA: a more severe infantile form and a milder (often) late-onset form. Babies with the neonatal form present with poor feeding and growth, low tone, weakness, vomiting, and seizures. The late-onset form presents in older childhood or young adulthood with chronic vomiting, developmental regression, weakness, protein intolerance, and occasional heart and movement problems.  Oftentimes these individuals come to the doctor for a heart or neurologic problem, and it is only after a long work up that an abnormal metabolic process is diagnosed.  The late-onset phenotype tends to be milder than the neonatal one.  However, in both forms of PA there can be multi-organ damage and long term devastating consequences to every organ system if not well treated.

In either form of disease, acute attacks happen when the levels of protein to be digested are out of balance with the amount of enzyme available. In many individuals, there can be times of normalcy followed by acute attacks. Attacks might be caused by a high-protein diet, increasing the protein to be digested, or by stress or illness, decreasing enzyme production. Constipation can also trigger an attack because it increases dietary protein available for processing, and gut bacteria can produce additional propionic acid. These attacks can cause a rapid downward spiral in a child’s condition because the vomiting child with poor appetite, desperate for calories, will begin to process his own protein for food, leading to increasing levels of acid.

Laboratory findings during the acute attack reveal excess acid in the blood, low white blood cells (neutropenia), low platelets, and low blood sugar. Ammonia also accumulates in the blood. The level of ammonia often correlates with the severity of the disease, so this is measured to design and monitor treatment.

Treatment of acute attacks includes rehydration, correction of acid-base balance, and provision of adequate calories, often through intravenous feedings. Minimal amounts of protein should be given, and this protein should be deficient in the four amino acids that need propionyl CoA carboxylase to digest them (isoleucine, valine, threonine, and methionine). To control the possible production of propionic acid by intestinal bacteria, antibiotic therapy (such as with metronidazole) should be started promptly. Constipation and other triggers need to be carefully monitored and treated. Patients with PA may develop carnitine deficiency, presumably as a result of urinary loss of propionyl carnitine. Administration of L-carnitine may be necessary to stop the attack.

Very ill patients with severe acidosis and elevated blood ammonia require dialysis to remove ammonia and other toxic compounds. Although infants with true PA are rarely responsive to biotin, this compound should be administered to infants during the initial attack. It is also very important in treating other errors of protein metabolism that look very similar.

Close monitoring of blood pH, amino acids, urinary content of propionate and its metabolites, and growth curves is necessary to adjust the proper balance of the diet and ensure the success of therapy. Some patients may require chronic alkaline therapy to correct low-grade chronic acidosis. Also, children with PA are especially prone to infections. Any infection should be treated promptly.

Liver transplantation is a potential treatment for some patients with severe disease and frequent attacks. However, this does necessitate lifelong immunosuppressive medication to prevent the transplanted liver from being rejected.

All patients with PA need to be followed closely by their team of doctors, as well as a nutritionist who is well versed in metabolic diseases.  With this type of regimen, some children do quite well, but treatment must be continued for a lifetime with conventional therapy.  It is also a good idea to involve a geneticist as part of the medical care team, as they can counsel carriers and affected individuals regarding the likelihood of passing on the disease to subsequent generations.

Long-term prognosis is guarded-especially in those who develop symptoms in the first week of life. Seizures occur in about 30% of affected infants. Survival has been improving dramatically in recent years, but death may still occur during an acute attack. This observed decrease in mortality is likely due to a combination of factors, including earlier diagnosis (due to newborn screening programs), better treatment, and elective liver transplantation. Normal development is possible, but most children do have some degree of permanent developmental deficit.

Strictly following a diet tailored to the child tends to improve results. But even apart from diet, outcomes vary considerably. In one family, a brother was diagnosed at 5 years of age, whereas his 13-year-old sister, with the same level of enzyme deficiency, had no symptoms at all!

The great news is that truly curing this disease, not just treating it, may be around the corner! Gene therapy is one method scientists have explored. In gene therapy, a missing or non-functioning gene is replaced by a new, functioning gene. In the laboratory, gene therapy for PA shows future promise for increasing lifespan. . However, it is not yet an approved treatment for PA in humans.  Successful gene therapy will not reverse brain or nerve damage, but can stop any further damage from occurring, giving the child a chance to grow unfettered. Coupled with important advances in early diagnosis, possible now even before a baby is born, the potential is huge.

As modern technology opens up new doors for a potential cure, one thing we do know about PA is that the earlier the disease is detected and treated, the better. I am absolutely thrilled by the recent action of so many states to screen all newborn babies for propionic acidemia and other genetic diseases. Baby’s First Test is a website that helps you to see what your state screens for in the newborn screen.  All states screen for a variety of metabolic disorders but not all states screen for the same ones.  I would encourage every family to seek newborn screening if at all possible. Early detection and action can make a major difference in children with PA and other inborn errors of metabolism.

Note: One good place to look to learn about ongoing clinical trials is clinicaltrials.gov.

This is NIH’s one-stop shopping area for information about clinical trials. Here you can access several databases containing facts about both public and privately supported clinical studies. Some of these studies are open to new participants, while others have already completed enrollment.

Last medical review on: January 23, 2021
About the Author