I like using nature's remedies, whenever it's practical. In our family, we turn to our own homemade broth we call "brew" for a natural cold treatment. 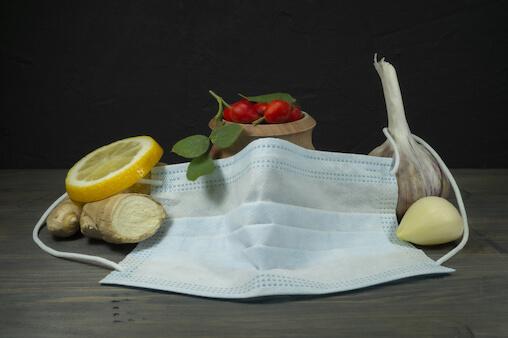 My school-age son has a terrible cold. I have him rubbing with mentholated ointment and breathing in steam, but he is so miserable! Is there anything else that will help? We prefer natural remedies whenever possible.

I like using nature’s remedies as a first line of treatment and prevention, whenever it’s practical.

Dr. Greene’s Homemade Natural Cold Treatment and How it Works?

When sore throats and colds hit, in our family, we turn to our own homemade broth that we affectionately call brew for a natural cold treatment. Below, we explain how the ingredients work together to help reduce bothersome cold symptoms.

It’s common to become dehydrated when sick with a cold. Drinking a warm broth can help soothe sore throats, while giving the body the hydration it needs to heal. The steam from a warm drink can also help calm coughs, loosen mucus, and clear nasal passages.

Acid is also tough on the cold virus, which is why lemons were added to our cold treatment. Cherries, in particular tart cherries, can be powerful at reducing inflammation. Finally, for children over one year old, honey is added for taste as well as for its antitussive (cough reducing) properties.

The brew tastes a bit like a Thai soup. The flavors may be strong for a child, so I’ve included both the adult version I drink and a kids’ version that may be better suited to their taste preferences. Most adults enjoy it — at least the second or third time they try it.

Combine all and bring to a boil. Pour through a strainer, add honey to taste and drink it hot.

*Honey is not recommended in children under 1 year of age.

Combine all and bring to a boil for a natural cold treatment. Pour through a strainer, add honey to taste and drink it hot.

A cough is a healthy, protective reflex – part of the body’s way of protecting and healing itself. But sometimes coughs can interfere with other important paths to health, such as sleep. Nighttime coughs,  can be rough for kids and parents. I’m not surprised that people spend billions of dollars on over-the-counter cough remedies, even though the most common ingredient, dextromethorphan (DM), has not been shown to be more helpful for kids than placebo.

The American Academy of Pediatrics and an FDA advisory panel have come out against the use of DM in kids under age 6 because of side effects. What’s a parent to do? It would be nice to have something that decreased both the frequency and severity of nighttime cough and increased sleep for both kids and parents.

According to a study of kids from age 2 to 18 published in the December 2007 Archives of Pediatrics and Adolescent Medicine, honey may be one great solution. The children in the study had come into an acute care clinic with colds and coughs that had kept them (and their parents) up the night before. About one-third randomly received artificially-honey-flavored DM cough syrups, about one-third received real buckwheat honey, and about one-third were given no treatment. In a three-way comparison, the honey scored the best in every category: reducing the number of coughs, reducing the severity of coughs, reducing the bother of coughs, increasing sleep for kids, increased sleep for parents, and combined symptom score. In two-way comparisons, only honey was significantly better than no treatment at all.

The dose was a ½ teaspoon in a single dose 30 minutes before bed for kids 2 to 5, a full teaspoon for kids 6 to 11, and two teaspoons for kids 12 to 18. The authors suggest choosing darker honeys, as they contain more bioactive compounds.

Since that initial study in 2007, there have been multiple more studies looking at the effectiveness of honey and children with coughs and colds. In 2016, a Cochrane review looked at three randomized controlled trials that included almost 600 children. The authors of the review found that honey was more effective than diphenhydramine (Benadryl), and at least as effective as DM, in helping to reduce cough in children. Given that DM can cause neurological side effects even at the appropriate dose, I’m a fan of trying gentle, food-based remedies like honey to treat cold symptoms.

The 2007 honey study referenced above was done in Hershey, PA, reminding me that chocolate has also been studied as a remedy for cough. Research published in The FASEB Journal in 2004 makes a strong case that dark chocolate may be a powerful cough suppressant.

Researchers at the National Heart and Lung Institute in London gave a series of disguised capsules to healthy volunteers. One week the capsules contained 60 mg of codeine, one week they contained 1000 mg of theobromine, an ingredient in chocolate, and one week they contained an inert placebo. The volunteers then inhaled an increasing amount of capsaicin, an ingredient in red peppers used to stimulate coughing in research subjects. The codeine was effective at preventing coughs, but the cocoa ingredient was 33 percent more effective, preventing cough effectively for 4 hours, and had no side effects. The same results were seen in coughing guinea pigs, and when looking directly at the guinea pig and human vagus nerve, a nerve that triggers coughing.

How much chocolate would this be? Chocolate preparations vary widely, depending on their cocoa content, but dark chocolate often has up to about 450 mg of theobromine per ounce. Milk chocolate has far, far less. Two ounces of dark chocolate was about the amount of theobromine used for the adults in the study. Half that may be plenty for kids (but of course there is still a lot to learn about this marvelous food). Will that much chocolate keep them awake? Even though theobromine is structurally related to caffeine, studies have shown it doesn’t interfere with sleep at those amounts. I used some fine dark chocolate for my own family during our latest viral cough illness, and our coughs disappeared nicely. What a pleasant way to get through a cold!

Paul IM, Beiler J, et al.  Effect of honey, dextromethorphan, and no treatment on nocturnal cough and sleep quality for coughing children and their parents. Archives of Pediatrics and Adolescent Medicine. 2007; 161:1140-1146.

Dr. Greene is a practicing physician, author, national and international TEDx speaker, and global health advocate. He is a graduate of Princeton University and University of California San Francisco.
Get Dr. Greene's Wellness RecommendationsSignup now to get Dr. Greene's healing philosophy, insight into medical trends, parenting tips, seasonal highlights, and health news delivered to your inbox every month.
2 Comments
Carin75 on September 28, 2013

Do you really want to boil the honey?

Great point. The recipe should read (and will soon) ” … an inch of chopped fresh ginger. Bring it to a biol. pour through a strainer, add honey to taste and drink it hot.” Thanks for the close read!

I hope that helps.
Best, @MsGreene
Note: I am the co-founder of DrGreene.com, but I am not Dr. Greene and I am not a doctor. Please keep that in mind when reading my comments and replies.