Parents are concerned about swollen lymph nodes in their children's necks or scalps. Most of the time, these are normal. Occasionally, they ... 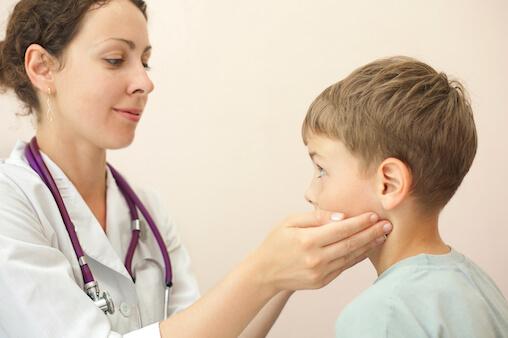 Dr. Greene, our 7 month old daughter Elise has had swollen lymph nodes in the back of her neck and head for about 3 months. They said that she could be getting over an infection (she has only been sick once and that was last week). Well, they have not gotten any smaller, and her hemoglobin was 11.3. The doctors think it is nothing. Correct me if I am wrong, but this sounds much more serious.

She is in the 95th percentile for length, but 50th percentile for weight. She has a humongous appetite, but is very thin. She is active and has been pulling herself up and standing alone along furniture since she was 6 months old. She has always been a happy, healthy baby.

I have looked up these conditions on the net (anemia, swollen glands) and found them similar to those of lymphocytic leukemia. What type of tests need to be run on her to rule this out? Also what other problems could these symptoms indicate?

After losing my mother to cancer at a very young age due to initial misdiagnosis, I do not want to take any chances with my beautiful little girl. When my mother went in with pain in her liver area, they didn't even think of cancer. They sent her home with pain pills only to find a few months later it was cancer. By then it was too late. That is also why I am so worried. Please give me all the information you can.
Shelley Haukoos - Industrial Lab Tech - Hibbing, Minnesota

Almost every day, Shelley, concerned parents ask me about lumps in their children’s necks or scalps. Most of the time, these turn out to be normal. Occasionally, though, they are an early sign of a serious infection or malignancy. No wonder, then, lymph nodes are such a cause of concern — particularly for those who have had a previous experience with cancer. All of us have hundreds of lymph nodes scattered throughout our bodies as a critical part of our immune systems. This network of nodes functions as a powerful, intelligent filtration system to keep the insides of our bodies clean and healthy.

What Are Swollen Lymph Nodes?

Tiny vessels called lymph vessels carry germs, foreign particles, and unhealthy or malignant cells to the lymph nodes, where they are trapped. Active lymph nodes enlarge as they attempt to destroy the unwelcome material.

The lymph nodes also function as schools. Lymphocytes, a type of white blood cell, study the foreign material so that they can produce antibodies, killer cells, and other substances to protect the body from the threat.

Sometimes the lymph nodes are overwhelmed in the process. Our defenders can be taken over by a cancer or an infection. These enlarged nodes can become a refuge where the invaders can hide and proliferate.

In a newborn infant, the lymph nodes are often small enough and soft enough not to be felt. But by the time a baby is several months old, healthy, growing, learning lymph nodes are frequently obvious enough to be noticed by parents — to their alarm.

When evaluating enlarged lymph nodes the first consideration is whether these nodes are localized (in one or two adjacent regions of the body) or generalized (spread throughout the body, which can include the spleen — the largest lymph node — which is found just under the rib cage in the left upper part of the abdomen). Generalized enlarged lymph nodes suggest that the body is responding to a whole-body problem, such as an infection (bacterial, viral, or fungal), an autoimmune disease (arthritis or lupus), a drug reaction, or a malignancy such as leukemia. The infection might be very mild, or might be as serious as HIV.

Localized enlarged lymph nodes are responding to events in the part of the body filtered by those nodes. A scratch on the finger can produce swollen nodes at the elbow and /or the armpit. Minor trauma to the foot is filtered by nodes behind the knee and in the groin.

The localized nodes most often noticed by parents are those around the head (especially near the base of the skull) and neck. They frequently grow in response to mouth organisms that enter the body during teething, tiny particles that get into the scalp from a baby’s lying down most of the day, cradle cap, or to respiratory infections of all kinds (ear infections, colds, sinus infections, etc.) — or, to some combination of these.

Much less commonly, head and neck nodes can grow from cat-scratch-fever, tuberculosis, drinking unpasteurized milk (mycobacterial infections), or eating undercooked meat (toxoplasmosis). They can also grow from an isolated malignancy, such as a lymphoma.

Many people have a sunny attitude toward “swollen glands,” not believing they will really be serious. Others believe these lumps to be harbingers of doom. The truth is somewhere in between. Most of these situations turn out to be fine, but enlarged lymph nodes should be respected.

When Should You be Concerned about Swollen Lymph Nodes?

When examining your child, your physician will pay attention to several important signs:

If lymph nodes remain truly enlarged for more than 2 weeks, or if other worrisome signs are present, then the next steps of evaluation include a complete blood count with a manual differential (CBCd). This test looks at the number and type of cells in the blood. Isolated anemia is not usually a problem, but anemia with an unusual white blood cell count or platelet number is worrisome. An abnormal CBC can be diagnostic of leukemia and lymphoma, but it is important to note that most children with neck malignancies have normal CBC’s.

Other simple tests include a sedimentation rate (a general blood test that indicates levels of inflammation and whether something significant might be going on in the body as a whole), blood chemistries (LDH is often elevated in malignancies, AST and ALT are often elevated in infections that cause enlarged lymph nodes), and a tuberculosis skin test. Depending on the results, other studies might include tests for specific illnesses (mono or HIV), and an x-ray or an ultrasound to get a better picture of what is going on.

If the node remains enlarged (greater than 1cm) for 2 to 3 months, or continues to grow after 2 weeks, then a biopsy of the lymph node may be indicated, unless the physical exam and lab tests are convincingly reassuring. At least half of the time, a biopsy does not reveal a definite cause for the enlargement, but the biopsy can rule out cancer and other serious problems.

Shelley, you bring to this situation your love as a mother, your difficult experience with the misdiagnosis of your own mother, and your determination to seek the best information available about swollen glands. Your pediatrician brings a wealth of knowledge, a practiced objectivity, and the experience of examining and following many lymph nodes. Together you have what it takes to ensure the best care for your daughter, as you keep the lines of communication open.