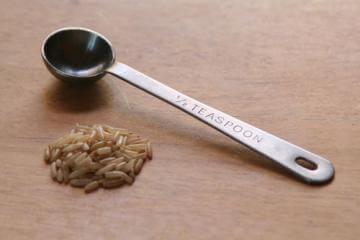 Dr. Greene tells a story about the delicious Paal Payasam…

We parents can change the world for our children, and do it quickly, easily, and inexpensively.

It’s tempting to feel outmatched when we look at societal trends as complex and entrenched as the childhood obesity epidemic. The roots of this crisis run deep, and they are fed both by our children’s food preferences and by $4.2 billion dollars in fast food advertising spent in 2009 alone. Some estimate that each year, for every dollar spent on promoting junk food to our children only about 1/10 of a penny is spent promoting healthy food.

But the real power is on our side, if we will use it.

In a region of India sometimes called the Venice of the East, sits a temple on the water, dating back to the year 790 AD. If you were to visit the temple today, you would encounter a simple practice based on a story more than a thousand years old.

The story centers on an historic game of chaturanga, similar to modern chess, between a local raja (king) and a traveling sage. The raja was so pleased with the game that he offered a great reward to the sage.

Many versions of the story have come down to modern times, but for our purposes, let’s suppose the raja offered the sage $4.2 billion. The sage declined money or jewels, and instead modestly asked just for some grains of rice in the following manner: the raja was to give him just a single grain of rice for the first of the 64 squares of the game board, two grains for the next square, four grains for the next, then eight, and so on, using the board to count the grains of rice.

The raja was disappointed at giving such a meager sum, but ordered a bag of rice to be brought to the game board. Then he started giving rice grains according to the arrangement. At the end of the first row, for the eighth square, he gave 128 grains of rice – about ½ tsp. The raja asked the sage to reconsider and choose a more worthy gift, but the sage was content. At the end of the next row, for the 16th square, the raja gave about 2 kilos of rice, which would have a wholesale value of less than 50 cents in the US today (By the way, the value of the rice in an entire box of white rice baby cereal might be about 5 cents – but because it’s designated for babies, parents might be charged forty times its value).

As the numbers on the ancient game board continued to double, the raja quickly began running out of rice. He called the court mathematician, who calculated that by the end of the final row, the raja would owe more than all of the rice in all India.

Mathematicians at IBM have since calculated that it would be enough rice to cover all of India fifty feet deep, or to extend end-to-end from here to the star Alpha Centauri and back. Twice.

Such is the power of doubling.

White rice baby cereal has been the dominant solid food given to babies since the time I was born, including its role as the very first exposure to solid food for most babies. We know that early food exposures help set children’s long-term metabolisms and food preferences. We’re setting children up to prefer processed white flour and other junk food. It’s time to “white out” that mistake by letting every child’s first food be a real food, and first grain be a whole grain.

The White Out Campaign aims to quickly change forever the initial food offerings from some pretty big corporations, including the largest food corporation in the world. How can we match that wealth and power? Easy. The power of parents to create massive change.

If each parent and pediatrician who wants to help make this change will talk with just two others, the doubling will unleash plenty of power to topple this entrenched, mistaken first food within the year. Let’s make history together.

Postscript: The travelling sage told the raja that he didn’t have to pay the debt immediately, but could do so over time by offering free rice to visiting pilgrims at the temple. To this day, visitors are still feasting on Paal Payasam, milk mixed with rice, and the raja’s debt is still being repaid.