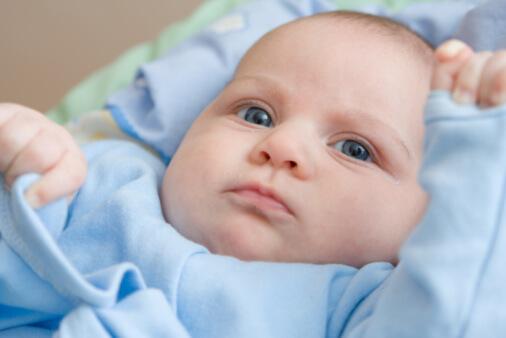 To reduce crying in irritable babies and to prolong sleep in babies who seem to wake up all the time, parents in many parts of the world swaddle their babies when putting them down to sleep. This custom of wrapping babies snugly in light cloths or sheets has been used for centuries. Researchers at the Pediatric Sleep Unit of the University Children’s Hospital in Brussels, Belgium decided to use their modern sleep lab to measure the effect of swaddling on sleep. They were particularly interested because swaddling while sleeping on the back has been said to reduce the risk of SIDS. Up to 30 percent of babies are still placed face down to sleep, despite a massive education campaign. One of the main reasons parents give for this dangerous choice is that their babies cry more on their backs and don’t sleep as well. If swaddling babies sleeping on their backs reduces crying and improves sleep, it might help promote sleeping on the back, further reducing SIDS, while making life more pleasant for babies and their parents. What did the researchers find?

The somewhat surprising results were published in the May 2005 Pediatrics. The babies in the study ranged from 6 weeks to 16 weeks old. The study started at 9 p.m. Half of the babies were placed on their backs and allowed to fall asleep without swaddling. Then at 1:01 a.m., whether they were awake or asleep, they were “tidily wrapped” in a small bed sheet to prevent them from moving their arms or legs, and returned to their backs for the rest of the night. The other half of the babies were swaddled at the beginning of the night, and unrestrained at 1:01 a.m. Throughout the night, all the babies were carefully monitored with EEGs (measuring brain activity), EKGs (heart activity), electrooculograms (eye movements), electromyograms (muscle activity), plethysmography (breathing movements), actigraphs (overall movement), thermistors (air flow from the mouth and nose), pulsoximeters (oxygen saturation in the blood), and rectal probes (core body temperature). All of this detailed information was collected and collated on computerized polygraphed recorders for a total of 16 babies.

On average, the babies did indeed sleep significantly better for the half of the night that they were swaddled. The swaddled babies spent significantly more total time asleep. They had fewer spontaneous awakenings. When the swaddled babies did wake up (which we all do, several times each night), they fell back asleep in an average of only 30 seconds (ranging between 0 and 7 minutes). The heart rates of the swaddled infants were also more responsive (a good thing!). There was no change in core temperature or oxygen saturation.

Nevertheless, the swaddled babies awakened more easily to outside noises! While the babies were dreaming (REM sleep), the researchers played 3-sec bursts of white noise at increasingly loud volumes to see what it took to get the babies to open their eyes. The babies awoke at significantly lower volumes when they were swaddled than when they were unrestrained. The swaddled babies awoke at an average volume similar to a moderately loud conversation. Their heart rates and blood pressures responded at even lower volumes. Perhaps this increased responsiveness to the outside environment makes SIDS less likely.

With only 16 babies, and only 4 hours each of swaddling time, the study was too small and too brief to make general recommendations about ongoing sleep habits. But the possibility of promoting both better sleep and increased responsiveness is exciting. And this high-tech, 21 st century evidence seems to support and explain generations of parenting wisdom.