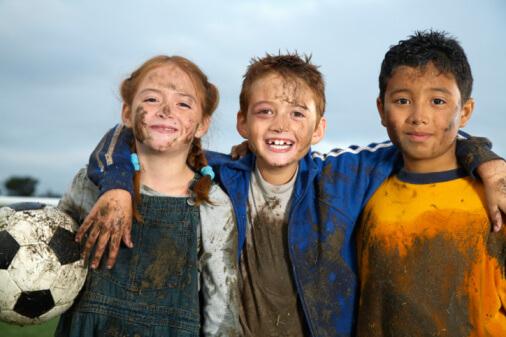 A fun, practical, affordable way to help overweight kids? My friend and colleague, Dana Weintraub, MD, from the Division of General Pediatrics at Stanford University School of Medicine and the Lucile Packard Children’s Hospital, led a team that studied the effect of an after school soccer team on weight. The results of SPORT (the Stanford Sports to Prevent Obesity Randomized Trial) were published in the March 2008 Archives of Pediatrics and Adolescent Medicine. Treatment for weight issues is not available for all kids. When it is, the treatment is often expensive, difficult, not very fun, and meets with limited success. Dr. Weintraub, determined to make a difference especially for disadvantaged kids, designed an innovative study that I hope will change what we do nationwide.

The kids in the SPORT study were low-income, overweight 4th and 5th graders from ethnic minorities. Half of the kids were randomly assigned to a supportive soccer team for overweight kids, and given shin guards, uniforms, and water bottles. They practiced after school for 75 minutes 2 days a week, plus 45 minutes of homework help from the coaches. The practice time included 15 minutes of warm-up/stretching, then skills drills, then a scrimmage game. A third session each week was ‘game day’. All sessions ended with a celebratory cheer, and recognition of positive achievements. Total sessions increased to 4 days a week in month 5 of the study, at the request of kids and parents, because the team was so much fun. Medals and awards were given out at the end of 6 months. Most of these kids had not been involved with team sports before.

The other half were randomly assigned to 25 weekly sessions where the kids received state-of-the-art information about nutrition, health, and exercise. This was also enthusiastically received. All of the kids in both groups wore accelerometers to measure their physical activity. Remarkably, all of the kids in both groups completed all 6 months of the study, though they did vary widely in how many sessions they attended.

Those who played soccer, instead of learning about what to do or focusing on nutrition, had significantly better results – with medium to large improvements in their BMIs compared to the other group. They also showed significant improvement in total daily activity, moderate, and vigorous activity. When questioned afterwards, almost all of these kids requested to continue the soccer team.

This appears to be the first study of sports teams of overweight kids as a strategy for preventing and treating obesity. I hope this spurs larger, more comprehensive studies.

In the meantime, team sports with supportive coaches and other overweight kids on the team may be an inexpensive, fun way to get weight under control. Besides the increased physical activity, it might be motivating because of the supportive adult attention, friendships, and sense of accomplishment. I’d love to see this available to all kids struggling with weight, as we sort out exactly what works best.