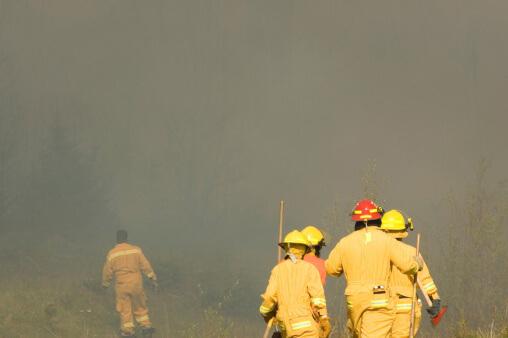 Every year wildfires are a danger to the lives and homes of many. But it doesn’t seem like a reality until you know someone personally who has been impacted directly. For several years we’ve been supporters of Vitamin Angels. Last year we became very close friends with Howard Schiffer, the founder and CEO of Vitamin Angels when we traveled together to the Dominican Republic to distribute vitamins to children and pregnant women in need. Since that time both Howard and his daughter, Eliana Schiffer have joined us here on DrGreene.com as Perspectives Guest Bloggers. We were deeply saddened when we heard the news that their home was lost this week in the raging Jesusita wildfires in the Santa Barbara area. We were not shocked by Howard’s response, “Last week I was in a Kenyan refugee camp distributing nutritional supplements. These people had nothing at all,” he said. “They had to deal with losing their homes to violence and hate, which, I believe, is tougher than losing one to a natural disaster. We’re OK.”

What a shining example.

The Board of Directors of the Vitamin Angels has immediately established a separate fund to help assist Howard and his family recover from this devastating experience:

Statistics show that over 30% of the world’s population suffers from micronutrient deficiencies. Vitamin Angels is a non-profit organization dedicated to providing vital nutrition in the form of supplements, to developing countries, communities and individuals in need. Vitamin Angels has set its sights on the issue of childhood blindness, with plans to eliminate childhood blindness by the year 2020 through the systematic distribution of vitamin A to at-risk children. Just $1 provides sufficient funding to preserve the sight of one child. In addition, Vitamin Angels sponsors programs to supply multivitamins to at-risk children and vital supplements to expecting mothers. Vitamin Angels programs and initiatives are funded through the support of generous monetary and in-kind donations from companies and individuals seeking to making a difference.