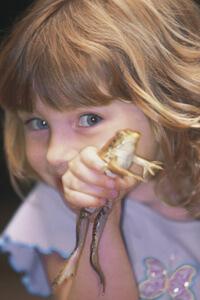 The frogs look normal on the outside. But trace amounts of one of the most popular weedkillers in the US have caused male frogs to grow internal female sex organs, according to a study published in the April 16, 2002 Proceedings of the National Academy of Sciences.These mutant frogs may help explain why the amphibian population is declining.

Frogs are much more sensitive to the toxic effects, like canaries in the mineshafts that were affected before humans – and were used as a warning. Atrazine changes the ratios of testosterone to estrogen (increasing the estrogen effect).

Among humans, growing children could be the most sensitive to atrazine affects. If it were affecting our kids, we would expect to see increasing changes in puberty or sexual development — although the kids might look normal on the outside. Perhaps we would see an increase later in life of estrogen-related tumors, such as breast cancer.

We don’t know yet whether atrazine is a serious health problem for humans (but we didn’t know about DDT until 30 years after the fact).

Either way, we should take the frog warning seriously. More study is needed. In the meantime, simple carbon filters can remove atrazine from drinking water. Also, this is another good reason to consider choosing organic foods. Supporting environmentally friendly agriculture can decrease the amount of atrazine and other chemicals in our water supply.