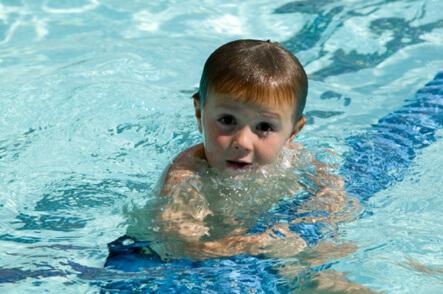 Get out your watch. How many hours a child spends in a chlorinated swimming pool before age 2 appears to influence the risk of that child later developing asthma and nasal allergies.

We’ve known for years that when you smell chlorine, the chlorine fumes in the air can trigger an asthma attack in a child who already has asthma. But recently, a new understanding is emerging, that chlorine can actually cause asthma in a child who never had it. The American Academy of Pediatrics sent a bulletin to pediatricians about this late in 2009.

And the added risk from chlorine exposure was even higher for those without a family history of allergies or asthma.

Among all children who had bronchiolitis, those who had been exposed to chlorine pools were almost 4 times as likely to develop asthma. And the same goes for hay fever.

Physical activity such as swimming is great for kids. And disinfection is important, especially in public pools. The researchers suggest choosing pools with other methods of disinfection, such as ozone, or at least pools that don’t smell as strongly of chlorine.

I’d go a step beyond this and encourage parents to be sure their homes don’t contain the fumes of chlorine either, whether from the laundry or from other cleaning products.

Whether you’re pregnant now, or have young children in the home, this is another good reason to take the plunge, and do take a fresh look at your cleaning cabinet.