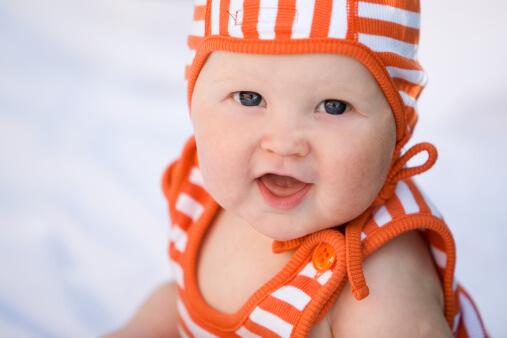 The word croup comes from an old Germanic word for the voice box. Today, croup, or laryngotracheobronchitis, refers to swelling centered at the larynx or vocal cords. It is caused by an infection, an allergy, or a foreign body.

Croup tends to appear in children between 3 months and five years old. It is characterized by a brassy cough that sounds rather like a seal barking. It is usually (75% of the time) caused by parainfluenza viruses, but 6-8% of cases of croup are caused by RSV. Most children have what appears to be a mild cold for several days before one evening when the barking cough becomes evident. As the cough gets more frequent, the child may have stridor (a harsh, crowing noise made during inspiration).

Croup is typically much worse at night. It often lasts 5 or 6 nights, but the first night or two are usually the most severe. Home treatment usually consists of a mist treatment — a cool air nebulizer is best, but if that is unavailable, the steam from a shower or bath in a closed bathroom can be used. Increased temperature causes the body to need more oxygen (like working out). Acetaminophen can make the child more comfortable and lower any fever, making the respiratory needs less. Cough medicines should not be used in children under 6 years old. Most cases can be safely managed at home.

Prior to the era of antibiotics and immunizations, croup was a deadly disease, usually caused by the diphtheria bacteria. Today, most cases are mild, but it can still be a dangerous disease. I would recommend at least talking with your healthcare provider by phone for any case of croup, to let her or him listen to the child’s breathing and cough. If the child has stridor constantly, she should be seen immediately. If you suspect a foreign body or an insect sting as the cause of croup, she should be seen immediately. She should also be seen immediately if she has retractions (tugging-in between the ribs with inspiration), dusky lips, drooling, or is very agitated. She may need to be treated with vaponephrine aerosols or decadron, in addition to a cool mist, to help decrease the swelling in the larynx.