What are Mongolian Spots?

Mongolian spots are present on over 90% of Native Americans and people of African descent, over 80% of Asians, over 70% of Hispanics, and just under 10% of fair-skinned infants. 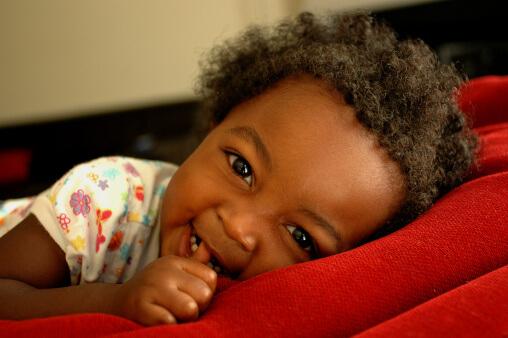 My daughter was born with a birthmark on her buttocks. The doctor said it is called a "Mongolian spot". Could you provide information on Mongolian spots, such as what causes them and how parents can deal with them? Thank you Dr. Greene.
A. Hafso - Alberta, Canada

Several years ago, I met a little girl who had been taken from her parents because authorities noticed that her body, especially her buttock, was covered with large, deep bruises. She and her parents were ripped from one another, for her own good. I can only imagine what they each felt. Child abuse charges were eventually dropped, when these “bruises” were correctly diagnosed as Mongolian spots.

These flat birthmarks can be deep brown, slate gray, or blue-black in color. They do sometimes look similar to bruises. The edges are often, but not always, indistinct. They are most common on the lower back and buttocks, but are often found on the legs, back, sides, and shoulders. They vary from the size of a pinhead to six inches or more across. A child may have one or several.

At least one Mongolian spot is present on over 90% of Native Americans and people of African descent, over 80% of Asians, over 70% of Hispanics, and just under 10% of fair-skinned infants (Clinical Pediatric Dermatology, 1993). Despite the name, Mongolian spots have no known anthropologic significance, except for being more common in darker-skinned infants.

Mongolian spots are nothing more than dense collections of melanocytes, the skin cells which contain melanin, the normal pigment of the skin. When the melanocytes are close to the surface, they look deep brown. The deeper they are in the skin, the more bluish they look. Either way, they are not related to bruises or any other medical condition. They do not predispose to skin cancer or any other problem.

Mongolian spots are present at birth, and most of them fade (at least somewhat) by age two. Most have completely disappeared by age five. If Mongolian spots remain at puberty, they are likely to be permanent. Fewer than five percent of children with Mongolian spots still have any by adulthood. Those who do tend to be the ones with multiple, widespread spots, or with spots in unusual locations.

If your daughter’s spot were in a very unusual location, I might suggest asking her physician to confirm the diagnosis. Since your daughter’s spot is on her buttocks, since these spots are entirely benign, and since most will disappear without trace, I would relax and wait. In the unlikely event that it is still present after puberty, there may (by then) be safe, painless, effective ways to remove them — if she should so choose.

Dr Greene your statement on Mongolian Spots is outdated. Most likely because the 1999 article you plagiarized from, (written by me) is no longer quite accurate these many years later. I will address the copy and pasting further below because this country has seen too much cheating and too little truth by their leaders but having such credentials, surely you would keep up with the research. Since 2006 we began to realize some atypical, large, persistent Mongolian Spots DO have associations that should be ruled out.
in 2013 a widely regarded statement went out:
“MS (Mongolian Spots) can no longer be considered as always benign congenital birth spots. A possible relationship between these birthmarks and IEMs has led to renewed interest in MS. A recent study has shown that extrasacral spots, diameter > 10 cm, dark color (blue/blue-black) and multiple patches are markers of persistence of MS beyond one year”
And from Gupta, Divya, and Devinder Mohan Thappa. “Mongolian spots: How important are they?.” World journal of clinical cases vol. 1,8 (2013): 230-2. doi:10.12998/wjcc.v1.i8.230, read the following. This is FAR p[riot to the 2018 broader statement.
“Historically, MS have been regarded as benign and parents are reassured that they will eventually fade away with time. Recent data, however, suggest that MS may be associated with other conditions like various inborn errors of metabolism and neurocristopathies. The term “neurocristopathy” refers to a disorder characterised by abnormalities in neural crest migration, growth and differentiation. A close relationship between central nervous system and melanocyte population, due to their common origin from neural crest, is well known. This explains why these conditions sometimes occur together.”

“Recognition of extensive MS can help a physician identify these related serious disorders early. The mucopolysaccharidoses respond well to stem cell transplantation or enzyme replacement therapy if instituted at an early stage, before irreversible organ damage occurs. Early palliative care decisions can be made for gangliosidoses. It also helps in identification of at risk families and prevention of complications.”

“MS have been described in association with non-involuting congenital hemangioma, Sturge-Weber syndrome, Klippel-Trenaunay syndrome, cutis marmorata telangiectatica congenita and segmental café-au-lait macule. In these cases persistent MS carry a worse prognosis and may be associated with underlying neurological defects. Also reported to occur with Sjögren-Larsson syndrome and leptomeningeal melanocytoma involving the spinal cord. They may also represent a marker of occult spinal dysraphism.”

Do not Princeton, UC San Fran and being a TED speaker mean it is not extreme Poverty or threat that forces you to cheat and copy other’s work? You must be a follower of Donald Trump and find truth and courage need not concern you.
You pretended to write:
1) “These flat birthmarks can be deep brown, slate gray, or blue-black in color. They do sometimes look similar to bruises. The edges are often, but not always, indistinct. They are most common on the lower back and buttocks, but are often found on the legs, back, sides, and shoulders. They vary from the size of a pinhead to six inches or more across.”
1)I wrote a 1999 copyrighted piece stating:
A Mongolian spot is a flat ‘birthmark’ which can look quite similar to a bruise. Their color varies from deep brown, slate gray, to blue-black; generally they are blue-green or blue-black. They are usually located on the sacrum and buttocks but also can be found on the legs, sides, and shoulders. Mongolian spots range in size from pinpoint to over six inches across. ” Funny how much are words look alike! But mine are 10 years earlier.

I have spoken with Dr. Greene about your concerns. He takes them very seriously and asked me to convey his thoughts.

This article was originally published on DrGreene.com on Feb. 4, 1997. The date showing on our page is the most recent medical review date, not the date of the original publication. Here is a link to the Internet Archive that shows a very old, historically accurate, version of that page.

When he originally wrote the article, he used information that was general medical knowledge and the 1993 Clinical Pediatric Dermatology article that he cited. He most certainly may have been influenced by your previously published work, but if so, it was ingrained in his general knowledge, which is a complement to the significance of your work.

Dr. Greene asked that we might take advantage of your wealth of knowledge on this topic and invite you to write an up-to-date article that covers Mongolian spots in depth. Please let me know if you are interested in being a guest author on DrGreene.com.

Note: I am the co-founder of DrGreene.com, but I am not Dr. Greene and I am not a doctor. Please keep that in mind when reading my comments and replies.

My daughter is 6months old and she has right side of the face covered with blue bruise mark and also in eyelid. She also have in the back and buttocks but it seems now its faded from day 1. My doctor said that it is a mongloian mark but its rare in face. I am worried that will it go away completely and just worried to make sure that this type of mark doesn’t spread.
Please advise

Hi. I’m 19 years old. And I’m Nigerian. I have this large greenish grey birthmark that spans from my left lower back, across my left butt cheek, down my left lap and stops a little distance above my knee. So it’s quite bigger than any other birthmark I’ve read about here in the comment section. And it says here that it should have disappeared in my childhood, why didn’t mine disappear. It really feels like it’s getting bigger too. I’m afraid of letting people see it cos i don’t want to be subjected to many questions and I really don’t want them to think I’m disgusting or I have a disease. I’m the only one in my family to ever have this.
I also want to know if there are ways of getting rid of it and if they are affordable cos I’m a third year student in the university and it’s hard enough for me and my parents without extra expenses. I’m glad to hear I’m not the only one in the world with this kind of birthmark though. Even though I Haven’t met you guys.

I’m 19 and I want to know why my Mongolian spot hasn’t disappeared and if it can be removed. It’s quite large. And I’m scared cos I feel it’s growing bigger. It starts from the left side of my lower back, across my left butt cheek and goes down to a little distance above my knee. I can’t wear some kind of clothes I would have liked to wear and I’m afraid people would find me disgusting if they saw it.

My doughter had on face .could I get any treatment .my doughter had from birth.we are really very worried for her face spot . Can u suggest me anything. Thank u sir

I have a Mongolian spot around my eye, and I absolutely hate it. Cover it with makeup everyday. I am considering to get it removed using the laser treatment, but I am a little iffy because it is within the vicinity of the eye. Do you think laser removal is a wise decision, knowing that it’s located around my eye?