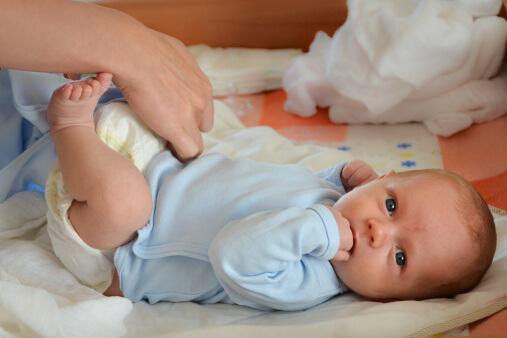 My 5-week-old's urine smells like brown sugar. He gets mostly breast milk (some soy formula and about 1 ounce of watered down apple/prune juice for hard stools). Should I be concerned by the sugary smell in his urine?

The urine odor may very well be fine, but there are a couple of conditions associated with sugary urine. One is diabetes mellitus, which is extraordinarily unlikely at your baby’s age.

There is another rare condition, though, called maple syrup urine disease (MSUD), in which the urine has a sugary sweet smell. It is very rare (less than 1 in 150,000 babies) but when it does happen, it is usually found in young babies.

There are several forms of MSUD. The classic form is quite serious, but kids with this disease get very sick in the first week of life with vomiting and worsening symptoms over a few days. There’s also an intermittent form where kids are well most of the time but occasionally vomit and have sugary-smelling urine.

Babies that just suffer from the mild form have the sugary smell at first and then gradually develop other symptoms. These kids can be treated with a special diet. There is also a form that responds well to the vitamin thiamine.

Almost all states screen for maple syrup urine disease as part of routine newborn screening. Most forms of MSUD (including the classic form) can usually be picked up on the newborn screen, but some cases might still be missed. The intermittent form would not be picked up because the test result is normal unless the child is having symptoms (Pediatrics, Sept. 2006, v118(3), e934-e963).

All of the forms of MSUD are a result of missing enzymes that normally help to process proteins. Again, the odor may be fine, but it is something you will want to be sure your doctor knows about. MSUD is unlikely–but in those kids who do have it, early diet changes are very important.