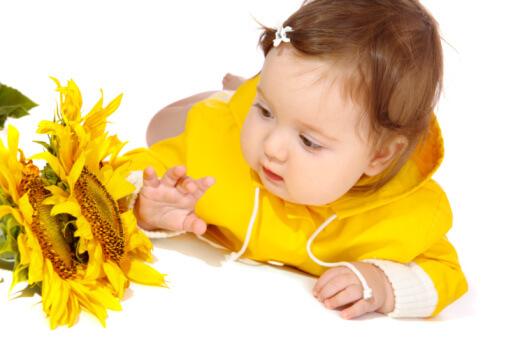 Dr. Greene, I hope that you can put my mind at ease. I have a beautiful, wonderful, healthy 8 month old daughter. However, at 2 months of age, we noticed her bellybutton was starting to stick out a bit. Since then, it seems to have gotten much worse. It has really started to protrude now that she is up and about crawling and walking. Our pediatrician says not to worry and that it is just an umbilical hernia. He says that worst case, she may have to have surgery around the age of 3 if it doesn't go away on its own. We have heard that this is fairly common, but what causes it and how serious is the surgery?
Thanks for any information.
Karen Lenz - Cahokia, Illinois

I used to scoff at “navel gazing,” or contemplating one’s navel. It wasn’t until I was studying fetal development in medical school that my own belly button became a source of wonder. It finally sunk in that my being was formed inside my mother’s body, and that she had supplied all of “the stuff” of my developing body through that most intimate of connections, the umbilical cord. My belly button became a permanent monument of my connection to, and my growth away from, my mom. As the cord was cut, and the belly button formed, a new life was launched.

If the umbilical ring is still open, the child has an umbilical hernia. The belly button “pooches” out, and gets bigger if the baby is crying or straining. Sometimes it looks almost like a balloon. When the baby is relaxed, this balloon can be gently pushed back into the belly — only to reemerge a few minutes later.

Umbilical hernias are quite common. They are found in about 10 percent of all babies, and as many as 90 per cent in some ethnic groups. They are also much more common in girls and in premature babies. Often, the hernia isn’t noticed when the child is very young, since the hernia may not pop out until the baby begins tightening the abdominal muscles and building up pressure in the belly. When sticking out, the hernia might be as small as a cherry or as large as a lime.

The word hernia conjures up thoughts of surgery, and appropriately so since many types of hernia are best treated with surgery. Umbilical hernias are an exception to this and are not a cause for alarm. In the not too distant past, the most popular treatment for umbilical hernias was to push in the pouch and tape a coin over the belly button to prevent it from pooching out again. Most of the time this worked and the umbilical hernia disappeared by the time the baby was a year old. Umbilical bands or straps were a variation on this theme.

We now know that not using a coin, band, or strap works just as well — and avoids skin irritation. Over 85 per cent of umbilical hernias will disappear by age one even if you do nothing at all. Predictably, the smaller the hernia (not the smaller the balloon, but the smaller the opening in the belly wall), the more likely the hernia is to close by itself. Still, even large hernias (6 cm opening) have been known to close spontaneously by 5 years of age. Those that first appear after 6 months of age are less likely to correct themselves.

There are a wide variety of opinions about when, if ever, surgery is useful. I would consider surgery if the ring is still bigger than 2 cm across at one year, if the defect grows after one year, or if it is still present at kindergarten (when further spontaneous closure becomes very unlikely). The only time umbilical hernias need urgent repair is in the rare event they become incarcerated (unable to be pushed back into the abdomen when a child is relaxed). Otherwise, there is no rush.

The surgery itself is simple and safe. The incision is tiny, and a couple of stitches usually suffice to close the remaining hole in the linea alba. Voila! An innie!

Karen, you can put your mind at ease. When I see an umbilical hernia I see a fading reminder of the physical joining you and your daughter shared. The in-again, out-again balloon reflects the struggle we all have between the deep desire to be one with others and the powerful urge to become a unique, separate human being. Early on, it is the connection that allows us to grow toward separation. Later in life, it is a strong separate self that allows us to experience the deepest union. As your daughter’s umbilical ring closes, you will enjoy her in ways you only dreamed about when you were carrying her inside.