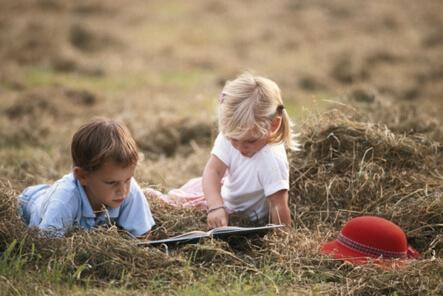 Our son Sean, is 3 and a half years old. He has what you call impetigo. One person I told about this said it was a third world nation childhood disease that came from unhealthy or dirty living conditions. Well I don't have a dirty son, and I don't live in a third world nation, and my son is not unhealthy (besides this annoying impetigo)! My husband tells me that he had it as a little guy himself. Elocon and Bactroban really don't help. I am very curious about this disease. Exactly what is it? How did he get it, and how can we avoid getting it in the future? Is it contagious? Anything you can tell me about this would be greatly appreciated.
Martha Perez-Goodall - Pacifica, California

In those last precious moments that Sean was inside you, before labor began, his skin was pure and unspoiled, untouched by any bacteria, protected by your womb. As he entered this world, his skin picked up organisms from your birth canal. Over the next week, these hitchhikers gradually multiplied. Within 10 days, their descendants covered every nook and cranny of Sean’s skin.

By and large, these quiet bacteria make good neighbors. Sean and the bacteria peacefully coexist, and the stable colonies of bacteria even help keep down the population of more aggressive intruders.

This thin armor can be breached by insect bites, by minor cuts and scrapes, by patches of eczema, or by chronically wet skin from hot muggy weather or hot clothes (diapers). Areas of skin that are red and inflamed, perhaps from rubbing, from a runny nose or from drool, have a disrupted stratum corneum.

When bacteria enter the skin through a chink in this armor, an infection can result. Some people are more susceptible to skin infections than others. This genetic susceptibility runs in families.

The two major types of bacterial skin infections are folliculitis and impetigo. Folliculitis is an infection of the hair follicles. Impetigo is a superficial infection of the skin itself. Impetigo usually begins with flat, red, 1-2 mm lesions, which quickly rise to little blisters or pustules, and eventually to open sores, often with a soft yellow-brown scab. These lesions can spread locally or under the skin and pop up at distant sites.

Each lesion is teeming with aggressive bacteria, but the bacteria cannot enter intact, healthy skin. Each time Sean touches the impetigo and then scratches another part of the skin with that finger, he can start a new spot of impetigo. (It is wise to keep his nails trimmed and to wash his hands often with an antibacterial soap). Others can catch impetigo from him if the bacteria come in contact with a break in their stratum corneum.

Two types of bacteria are the main culprits: staphylococcus (staph) and streptococcus (strep). Gentle washing with a bactericidal cleanser can help prevent local spread and reoccurrence, but antibiotics are the mainstay of therapy.

Topical antibiotic ointments are very effective for staph impetigo (which is more commonly seen around the nose and on the trunk or arms). Bactroban (Mupirocin) ointment is the most effective topical antibiotic, but failures and relapses are more common. Bacteria live under the yellow-brown scabs. If these are present, they must be removed in order for a topical antibiotic to work. Soaking in warm water with a liquid antibacterial soap is usually effective in removing them, but gentle rubbing is sometimes necessary. Older children who suffer from frequent cases of impetigo may benefit from once a week baths in a tub filled with water and ¼ cup bleach. This reduces the amount of bacteria on the skin and may prevent recurrences.

Oral antibiotics are a faster and more reliable therapy in stubborn cases of impetigo. They are recommended if the impetigo appears widespread or deep, or if the topical antibiotic is likely to be licked off.

The other medicine you mention, Elocon, is a topical steroid. This does nothing to fight infection. It reduces redness and inflammation, but the impetigo is likely to become even worse once you stop using it.

Impetigo is present in the third world, but it is present everywhere there are kids. It is by far most common in infants and young children. They have more colds, more fingers in the nose, more small cuts and scrapes, and more insect bites. Impetigo doesn’t imply that Sean is dirty or unhealthy. Impetigo is contagious, but one can easily get it from bacteria normally present in one’s own skin or nose.

Even though this recurrent problem has been troubling for Sean (and you), these relatively small patches of impetigo are only superficial, and only there some of the time. They can serve as a reminder of how effective most of his skin is, most of the time, at keeping billions of bacteria from invading Sean’s body at every turn.

Dr. Greene is a practicing physician, author, national and international TEDx speaker, and global health advocate. He is a graduate of Princeton University and University of California San Francisco.
Get Dr. Greene's Wellness RecommendationsSignup now to get Dr. Greene's healing philosophy, insight into medical trends, parenting tips, seasonal highlights, and health news delivered to your inbox every month.
1 Comments
Nikki on December 11, 2013

Once on oral antibiotics, how long does it take for the lesions to go away and the itchiness and stinging to resolve? If there is still blister lesions even after 2-3 days on oral antibiotics, is the person still contagious? I am a mom who was diagnosed with Impetigo (lesions scattered all over) and have a baby at home who needs me. I am concern about holding her but I need to. Thanks