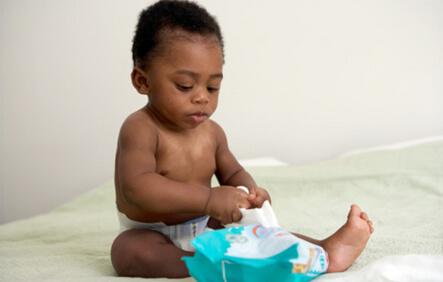 I have a 15 month old daughter that has the worst case of diaper rash we've ever seen. It started awhile after she had taken some antibiotics. It is bright red with little blisters. We've been using Desinex. We let her run around without a diaper on at times hoping that it would help. Is this caused from yeast? What can we do?
Kevin Stratton - Zillah, Washington

Diapers were a wonderful invention, controlling infants’ waste products in a relatively convenient, clean, and healthy way. Still, ever since children began to wear diapers, diaper rash has been the most common skin disorder of infancy.

A surprising number of different entities fall under the label of diaper rash:

Skin wetness is the common denominator underlying the various causes of diaper rash. Even skin lesions of systemic illnesses tend to concentrate in areas where the skin is already damaged (the Koebner phenomenon). Urinary wetness increases skin friction, raises the skin pH, makes the skin less cohesive, and makes it more permeable. These effects combine to intensify the action of stool enzymes or other irritants that then inflame the skin. In all the above diaper rashes, the outermost layer of skin — stratum corneum — has been damaged. With this protective layer breached, it is easy for microorganisms such as yeast or bacteria to invade the inflamed skin. This makes the rash worse and less responsive to usual treatments.

Yeast is by far the most common type of organism found in a diaper rash. The organism is quite prevalent and thrives in warm, moist skin. Yeast involvement should be suspected in any diaper rash that has not improved dramatically with 72 hours of appropriate therapy. Current or recent antibiotic use makes a yeast infection even more likely, since this reduces the amount of the skin’s ‘good’ bacteria that fight infection. Classically a yeast rash is beefy red with sharp raised borders and white scales. Small satellite lesions surround the main rash. Even without the classic pattern, however, yeast is often present.

Your daughter may well have a yeast rash. Try adding a cream such as 2% miconazole to your usual diaper rash regimen. Continue air drying and applying a protective layer such as a diaper cream over the miconazole. Washing with warm water may also be helpful. If the rash has not improved within 72 hours of this treatment, it is probably still a yeast infection, but contact your doctor for additional help.

Last medical review on: December 12, 2011
About the Author