How Do We Get Our Toddler to Stay in Bed? 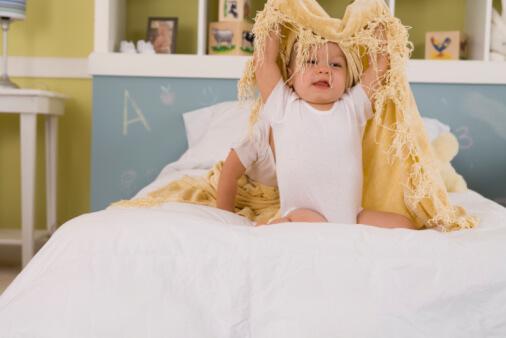 My son, Jake, is 18 months old and sleeps well all through the night, but we just bought him a new bed which does not block him in his bed. How can we teach him to stay in bed when it's bedtime? Is it something that CAN be taught? Any advice would be appreciated. Thanks,
Woody John Woodcock - Virginia Beach, Virginia

When our darlings reach about six months old and the threat of SIDS is greatly reduced, we breathe a sigh of relief. We begin to think of their cribs as safe havens. While they may not always be happy in their cribs, they won’t be able to hurt themselves while in the protection of those four slatted walls. But how do we get them to stay in bed as they grow?

First, he learns to pull himself to standing. Soon he is cruising ’round and ’round the crib, instead of going down for a nap. Then he begins to bounce up and down. Before long, he catapults over the top — generally landing with a loud thud. A long silence follows, then a heart-stopping wail.

Woody, your first task in this transition is to make his room as safe as his crib used to be. This means fresh, aggressive childproofing.

Next, make his room a place where he feels safe — especially at night. Night lights are important, but at this age many kids want even more light than that. A 15- or 25-watt bulb in a lamp can keep the monsters that “live under his bed” at bay. Put the lamp on a timer so that it goes on at bedtime and off when it is time to wake up. This serves two very useful purposes. First if your son does wake up during the night — no — when your son does wake up during the night, he won’t be as frightened as he would be in the dark. Also, you can begin telling him that when he wakes up, if his lamp is still on, it’s still night-night time. Think about it — when we wake up in the middle of the night, we roll over and check the clock (usually hoping that we can get a few more hours of sleep before we have to face a new day). But when your son wakes up, he has no way of knowing what time it is. During the months when sunrise coincides with waking time, there’s no problem. But in many places that leaves two-thirds of the year when confusion can cause unrest (pun intended!).

Kids love stories at this age, so it’s a wonderful time to introduce a cassette tape player that your son can learn to turn on and off all by himself. There are lots of great story tapes available now for children. Investing in a few of these is smart. It’s an even better investment to make your own. There are no sounds in the world that are as comforting as mom’s and dad’s voices. At first you will need to help your son turn on the tape, but it won’t be long before you wake up in the night to hear your own voice coming from the tape player in the next room.

Finally, you might want to install a sturdy, metal child gate that swings open. Do not use a wooden, accordion style gate — both for your convenience and his safety. Let your son see you assembling the gate. When it’s in place, make a game of opening the gate and walking through it, then closing it and opening it again. Next close the door with you and your son inside. Explain to him that the gate is there to help him stay safely in his own room. When he’s comfortable with this, leave the room and stand just outside. Remind him that while he is in his room, he will be safe. Walk out of his sight and come back so that he gets used to being alone, inside his room, with the gate in place.

You have just re-created the safety of his crib — only larger.

Just before bedtime, tell him again that the lamp will be on as long as it’s nighttime. Remind him that while it is on he needs to stay in his room. When you put him to bed, help him turn on his tape player and, after your normal good night hugs and kisses, leave closing the gate behind you.

Your son will undoubtedly test you to see if you will enforce the “night-night time in your room” rule. He will probably stand at the gate and call for you to come and let him out — if you are lucky. (He also might cry mercilessly and try to make you feel guilty for confining him to his room). When this does happen, check on him to make sure he has not been awakened by a bad dream or he is not sick. Feel free to go into his room and help him get comfortable again so that he can go back to sleep. Let him know that he can read a book, listen to a tape, or play with his toys (since you can’t stop it, don’t make a fuss over it). But he can’t leave his room till morning! Leave and be prepared for an unhappy boy. He will probably try to manipulate you into opening the gate and letting him come into your room. Children will often respond to new rules by testing them. Don’t give in. Unless you have decided that you want to have a family bed, teaching your child to sleep through the night in his own room is a real gift to the whole family.

Before you know it your little guy will be asking for a bunk bed, and your new concerns will be keeping him safely in the top bunk. Tip — when that time comes, don’t buy him Superman pajamas :o