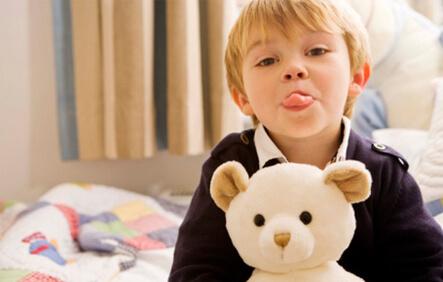 Dr. Greene, my 2 1/2-year-old son is tongue-tied (the skin under his tongue comes to the very tip of his tongue). I have seen several doctors regarding this issue, but none feel that it is necessary to surgically correct this problem. I would like to know at what point it does become surgically necessary. My son gets very upset when we don't understand what he's saying -- which is about 75% of the time -- and the skin under his tongue becomes white and sometimes blistered from the strain he puts on it trying to talk. I'm afraid that he is going to have speech problems and possibly more problems when he reaches school. He is already mispronouncing his words and sometimes corrects us because he feels that we are not saying them properly.His father had his cut and so did his stepbrother. Do you have any advice? Thanks in advance.
Christine Mitchell - Woodbridge, Virginia

When most people hear the term “tongue-tied”, they picture someone nervous, stammering, and at a loss for words. Tongue-tie isn’t just a cartoon caricature or picturesque description of an embarrassing moment; it is a relatively common physical condition.

During fetal development, cords of tissue called frenula form in the front-center of the mouth, beginning as early as 4 weeks of gestation. The word “frenulum” comes from the Latin word for bridle. A bridle can be used to guide a horse. In roughly the same way, the frenula guide the development of the structures of the mouth. Early in development, the frenula are important, strong cords, which then recede over time. After birth, they are still useful in guiding the positions of the baby teeth as they come in.

In some kids, the lingual frenulum is short and taut after birth, partially restricting movement of the tongue. This condition is called ankyloglossitis (don’t doctors have great names for things?) — more commonly known as tongue-tie.

In most of these children, the frenulum continues to recede during the entire first year. Their parents get to watch a part of development that usually happens in the hidden inner sanctum of the uterus.

Although tongue-tie is common, only in rare children is medical treatment necessary. If a tight frenulum is interfering with a baby’s feeding, then early treatment is indicated. To accomplish this, the tongue is “loosened” by means of very simple and effective surgery. If a baby is feeding well, however, it is usually better to wait at least a year before revisiting the question of surgery, since tongue-tie so often resolves on its own.

Treatment is again considered if the tongue-tie is affecting speech — especially making it more difficult to pronounce the “th” sound. Tongue-tie is most likely to persist and pose a problem if the insertion points of the frenulum are on the very tip of the tongue and also on the top ridge of the bottom gum. A strong family history is also suggestive of a need for surgery at some point.

It is normal for toddlers to speak in a charming, partially understandable way. We expect kids to have mostly intelligible speech by age three (i.e. others besides their parents understand more than half of their words easily). Your 2 1/2-year-old’s speech may be normal for his age, or may be hindered by his tongue-tie. I would recommend an evaluation by an experienced speech pathologist. This will give you useful information and may help force the hands of doctors and insurance companies. If the speech therapist feels that the tongue-tie is indeed hindering his language development, then I would certainly ask a pediatric otolaryngologist (ear, nose, and throat surgeon) to consider a simple surgical release for an otherwise healthy child.

If the therapist is unconcerned about his speech development, the simple release surgery could still be performed for cosmetic reasons. Often, Christine, “cosmetic” reasons are not superficial reasons. They can affect such core issues as self-esteem, physical comfort, and development of social interactions. Rarely will you encounter an easier way to free your son from bonds that are holding him back!