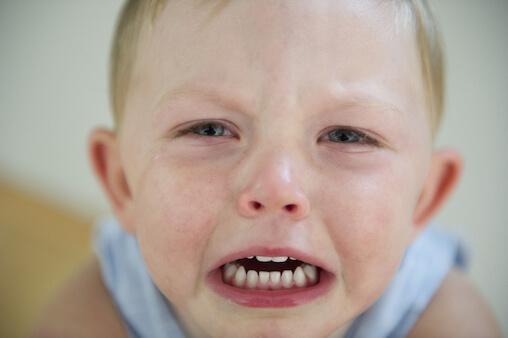 My 25 month-old son throws temper tantrums at the worst possible times, like in the grocery store (which happened to me yesterday). What do I do? I'm so embarrassed!

You are not alone! Most parents who have had a two-year-old have experienced the same situation and the same feelings. Temper tantrums are very common at this age, and when viewed in context, they can be an extremely constructive part of the development of a healthy child.

Newborns and infants are quite happy as long as their basic physical needs are met. Children in the developmental stage known as the “Terrible Twos,” or “First Adolescence,” become aware of the choices available to them and as a result become angry or frustrated when they are powerless over those choices. The result is often “Temper Tantrums” or what I like to call “Emotional Storms.”

Let’s look at the example you mentioned of the grocery store — as an adult, you can choose whether or not you want to go to the grocery store, when to go, what products you are going to buy, and which products you will not purchase. When you are in the middle of shopping in the grocery store, your child will see things he wants. To make the supermarket situation worse, there are cleverly-designed packages up and down the aisles that scream, “Buy me! Buy me! Buy me!” To a large extent we are able to tune that out (although it affects us much more than we think). For a small child who is just learning to make choices, it’s like going to a deafening rock concert. Visually they are overwhelmed by high-decibel choices. They are compelled to start wanting multiple attractive items. When they can’t have what they want, they dissolve into tears and worse — deafening screams. Of course, everybody in the store turns and looks at your child, and (shudder) at you!

Surveys have shown that there are two common reactions of parents in this situation. The first is to spank or discipline the child in some way. Our role during this phase is to teach our children to make choices, to teach them to grow up as independent, highly functioning people. If you discipline a child for a temper tantrum in a store, you are teaching a powerful unconscious lesson: down the road, when he or she is in second adolescence, and is confused, hurting, scared, and doesn’t know what choices to make — don’t talk to Mom or Dad, because they will not understand and it will hurt.

So, what does one do about temper tantrums? Try to avoid emotional storms whenever possible. Children are most susceptible to storms when they are tired, hungry, uncomfortable or bored. When possible, plan shopping for times when your child is rested, fed, and healthy. Interact with your son throughout shopping and/or bring along stimulating toys or books.

Remember the situation from your child’s perspective: you are going along making choice, after choice, after choice, but when he tries to make a choice, he doesn’t get what he wants. You can see how frustrating this would be. It’s often helpful to let your child pick out one or two things when at the store. A good way to do this is when a child asks for something, instead of saying, “No,” (which will immediately make him or her say, “Yes!”) say, “Let’s write that down.” Then write it down. When your child asks for something else, write that down, too. Then when you are all done, read back a few of the things on the list that you think would be good choices, and let him pick one or two of the things on the list. If children can make some choices, they will both learn more and feel better. Another thing that is really worthwhile is for you to make a list before you go to the store. That way it won’t look so arbitrary when you pick what you want off the shelf, and your child doesn’t get his choice. As you shop, whenever you put something in your basket, check it off your list (even if it is not on your list, check it off. The list is to teach that each item has a purpose, not that you had thought of it previously).

These strategies can greatly reduce the number of emotional storms, but their appearance is inevitable. What then?

First, take a deep breath. I’ve been in a grocery store with my children having temper tantrums, as a pediatrician, with my patients in the checkout line. The first thing you feel is, “I just wish I could drop into the floor someplace so nobody would see me.” A lot of people won’t understand. They will look at you and think your child is spoiled, or you are a bad parent. The truth of the matter is you probably have a normal child and are a good parent.

It is not a defect in parenting that your child is acting this way. People who don’t have kids may not understand, yet. That is their problem, though. Try to be patient with them.

When I see a parent whose child is having a tantrum in a store, I am reminded of labor. When I look at a mom in labor, I see something that is heroic, and triumphant, and beautiful. Tears come to my eyes when I am privileged to be a part of a birth. So, the next time this painful situation happens to you, take a deep breath and remember, if Dr. Greene were here, he would see something heroic and beautiful.

Next, while you are taking a deep breath, consciously relax. Kids really play off your emotions. It’s so hard to relax in this situation, but just let your muscles go. The more uptight you are, the more energy is available for their tantrums. Kids thrive on attention, even negative attention.

Where you go from here depends on your child. Some children will calm down if you pick them up and hold them. My first son was like that. His storm would dissolve if you just gave him a big hug and told him it would be all right. If you picked up my second son during a storm, he would hit you — there are different ways to get him to calm down. Each child is unique. One thing that often works very well is to try to voice to the child what he is going through. “You must really want to get this, don’t you?” Then he may melt and say, “Uh huh.” You will have to experiment with your son to see what it is that can help him understand that everything is okay, these bad feelings will pass, and that it’s all a normal part of growing up.

Whatever you do, if your child had a temper tantrum to try to get something, don’t give it to him, even if you would have ordinarily done so. Giving in to tantrums is what spoils a child. Giving in is the easiest, quickest solution in the short run, but it damages your child, prolongs this phase, and ultimately creates far more discomfort for you. Choosing your son’s long-term gain over such dramatic short-term relief is part of what makes properly handling temper tantrums so heroic.

Instead, you might say, “Sorry, I would love to give you what you want, but because you had a temper tantrum, I can’t right now. Next time, let’s do that.” Stand by your child during this difficult time for both of you. When you feel yourself getting tense, again say to yourself: temper tantrums are a beautiful, albeit painful, part of growing up, so take a deep breath, relax, and remember, “Dr. Greene thinks you are beautiful, courageous, and worthy of high praise!”