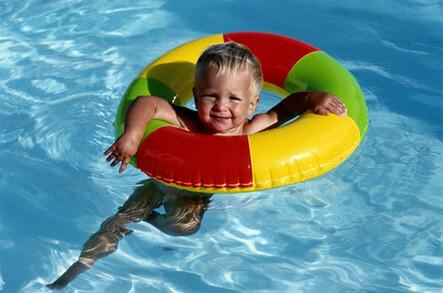 Dr. Greene, my 4-year-old son recently had ear tubes placed. My doctor said that it is okay for him to go swimming (I think). My friends look at me horrified. They say he needs to wear custom ear plugs. Their doctors told them that their children with ear tubes shouldn't let their ears get wet. My son loves the water. What should I do?
Scottsdale, Arizona

Most parents of children who have had PE tubes placed are happy with the results. They report fewer ear infections, easier clearance when infections do occur, and less worrying about whether their children have ear infections or not.

For many parents, the most vexing issue is the need for water precautions. Neither making their children wear ear plugs nor limiting water exposure is very fun. For years otolaryngologists (ear, nose, and throat doctors) have cautioned against allowing water in an ear that has an open tube in the eardrum. Recently, some have begun to suggest that swimming precautions are unnecessary — that water does not get through the tiny tubes into the middle ear. Over the last few years there has been a flurry of articles arguing both points of view. Your quandary is the same one that faces experts.

In the late 1990s, an excellent study was published in the Archives of Otolaryngology and Head and Neck Surgery that shed light on this controversy. The investigators followed 399 children with PE tubes. They were divided into four groups at the beginning of the study. Children in the first group were encouraged to swim without precautions. Those in Group 2 received antibiotic ear drops each night after they had been in the water. Those in group 3 wore molded ear plugs whenever they were in the water. Children in all three of these groups were instructed against diving and swimming more than 6 feet beneath the surface (since water under pressure presumably enters the middle ear through the tubes more readily). The fourth group consisted of confirmed non-swimmers. All parents were warned not to allow soapy water to enter the ear during bathing (since the lower surface tension of soapy water could allow it to penetrate the tubes more easily. Also, soapy water could be more irritating to the middle ear if it gains entrance).

Children in the three groups of swimmers experienced no intergroup difference in the incidence either of ear infections or of draining ears regardless of plugs or ear drops. There was also no difference found between the swimmers and the non-swimmers.

Conclusion — relax and follow your doctor’s advice. Let your son enjoy swimming. Forget ear plugs. If your son turns out to be one of the unfortunate few who gets frequent ear infections in the summer months even after tubes, you might want to try water precautions on the chance that he is particularly sensitive to water exposure.

Perhaps sometime soon, someone will do a study about whether diving, underwater swimming, and soapy bathwater precautions are all really necessary. In the meantime, better safe than sorry.

More recent studies have concurred with the conclusion that ear plugs are not needed for routine, surface swimming.

So it appears that recent studies agree that ear plugs are not needed for regular, surface swimming. However, one may consider ear plugs for soapy water baths and deep swimming until more research can clarify the situation.

I am 52 years old and have had issues with getting water in my ears from the shower and swimming. The best product out there is called earcapsule.com. These are so easy to use I am amazed they are just recently invented. Try these they are a game changer.

I am a 49y/o with a tube in my left ear. I love to swim and my husband and I have been considering diving. I recently took a beginner class in which we dove 10 ft. I had to ascend and clear my ears b/c my right ear was hurting. After our dive I had quite a bit of drainage from my left year but no pain. It is not recommended that I dive with a tube however it is on my bucket list and I’m considering risk vs. benefits.

My son had tubes in his ears in the middle 70’s. We were warned not to get water in the ears. We moved to Houston in May and for the first 6 weeks we rented an apartment with a pool . We did not have the heart to say to a five year old he could not swim with his brother and sister. We went to the beach in Galveston often , and ended our day at the water slide to remove the sand and salt. In April the following year we went back to Denver for a visit . We happened to make a Dr. Visit to have his ears checked after swimming and playing in the Gulf. His ears looked good.
Best his Dr. Has ever seen them

I would totally disagree so prob depends on person. I am in my 30’s abs have tubes, still, for years. If more than a trickle of water – plain water – gets in my ear my whole eusrachian tube, travelling right down through my neck seizes and I am in pain levels worthy of t3’s at the least – mine become incredibly infected from the water abd require antibiotics abd cleaning out by the specialist. I know mine is certainly a worst case scenario – but I guess just want to preach caution. It’s easy to say hey no problem when you’re not the one dealing with the pain.

I too disagree with getn water in ears w tubes. I have one in my left ear that has been there going on 8 years. If I get water in that ear I inevitatly end up with an infection. I just wish the darn thing would pop out but its not going anywhere.

I am 50 and have had t tubes in both ears on & off for last 15 years. My consultant told me to use a good blob of blu tack when swimming. I always take a pack on holiday & it works a treat.

As a person with tubes, wear ear plugs when swimming! I just went swimming not knowing to put plugs in my ears and tubes filled with water it was excruciating pain clear down into my throat and I got extremely dizzy still 4 hours later I’m still in pain and cannot get the pressure or water out. Please put plugs in your child’s ears if they are going to be going under water!