We live in stressful times -- not just for adults, but for our kids as well. Sometimes that makes it hard to fall asleep -- this is what we call stress-related insomnia. 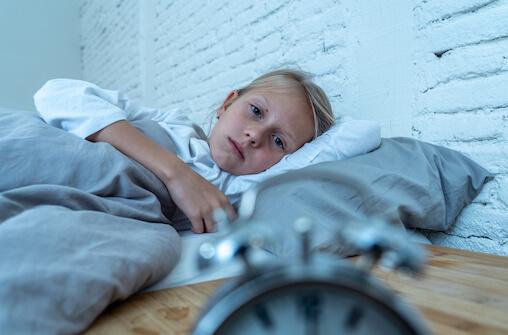 My 13 year old daughter has developed a fear of not being able to go to sleep. This problem started after she was forced to go to sleep without light as a result of a hurricane's assault on our city. She is a happy, healthy, well-adjusted child, without previous history of sleep problems or phobias, and is currently on no medications and does not ingest caffeine. Although my reassurance thus far has not succeeded in alleviating this irrationality, I am not tempted to try sedatives. She is not having nightmares and is not experiencing stress with either academics or relationships. Once asleep she is able to sleep through the night without incident. However, falling to sleep can take a couple of hours or more, punctuated by several tearful trips into her parents' bedroom where she expresses her fear specifically. Do you have any comments or suggestions?
Harley Easter - Emergency Physician - Raleigh, North Carolina

Many of you probably remember seeing footage of the 1989 Loma Prieta earthquake. I am told that national news coverage showed three striking images over and over and over — the horrible crash on the San Francisco Bay Bridge, the fires burning out of control in the San Francisco Marina District, and the collapsed Cypress Freeway Structure in Oakland. I say, “I am told,” because I didn’t see any of the footage — I was inside the collapsed freeway.

I can not begin to tell you the horror I experienced during the next three days and nights. The top deck of the double-decker freeway literally caved in on the bottom deck, which remained precariously standing. With each aftershock, and it seemed there were hundreds of them, the whole structure threatened to come tumbling down. As a rescue worker, I spent most of my time crawling in and out of the area where most of the victims were trapped — the area that had once been the bottom deck of the freeway. We looked for spaces where there was room to crawl. In many places, the two decks were completely merged with no hope for survivors. Once inside, it was interminably hot. There were clouds of cement dust filling the air making it almost impossible to breathe. And the sounds — car horns blaring, radios playing an eerie accounting of what I was experiencing, and occasionally moans. We longed for the moans — someone was still alive! It seemed like just about the time we would make it to someone who was still breathing, the structure would begin to sway, again, and again, and again, threatening to trap the rescue workers along with the victims.

Several months later I was on board a pleasure boat. The sea became rough and the boat began to sway. I must have turned a ghostly color as I hung onto the rail. An older woman approached me and asked if I was all right. I told her that I was having trouble because the swaying reminded me of a difficult experience. “You’ve been in an earthquake, haven’t you?” she asked. She went on to tell me that she knew that was what was going on just by looking at me. She knew because she also had been in an earthquake — almost 40 years earlier.

I tell you this story to illustrate the powerful emotional impact a catastrophic experience can have.

Even though your daughter may not have been in the eye of the storm, she came to understand firsthand how overwhelmingly powerful nature can be. This experience changed how she viewed the world. The hurricane declared that no matter how hard she tried, no matter what she accomplished, no matter how good she was, she could not count on living a long, happy life. This is a difficult thing for any of us to deal with, but it is particularly hard for children.

Your daughter is entering adolescence — the age of idealism. But the hurricane took its toll. Because the main symbol of the hurricane’s power was to leave you in darkness, it is the darkness that most reminds your daughter of her loss.

How to Address Stress-Related Insomnia

The best thing you can do to help your daughter through this difficult time is to help her express her current feelings. While the deep feelings of young children can often be drawn out through story-telling and drawing, most adolescents’ deep feelings can be drawn out through literature. The most easily accessible form of literature in our culture is the movie. One film that deals with this issue is “Phenomenon”. You might consider taking your daughter on a streaming-date-to-the-movie. Afterward, ask questions about how she felt watching the movie, listen to her fears, and help her work through her doubts. During this time, share your own feelings as well, especially if you were also touched by the movie. (I’ve personally seen it twice and I rarely have time for movies these days. I will warn you, it may require several tissues!) Be careful not to try to “fix” your daughter’s fears. They are very real and she needs to face them.

Whatever techniques you use to get your daughter to share her feelings with you, it is important not to short-change this step. In order to fully embrace life, each person must embrace death. If not now, your daughter must one day face the fact that we will all die, and unfortunately, before death, many people do suffer. If she is able to grasp that concept now, she will achieve an incredible level of maturity.

I recently heard a radio interview of a 13-year-old boy who races bicycles. The interesting thing about him was that he only has one leg. The other had been amputated, first at the knee and later at the hip, due to bone cancer. In the interview, he sounded so full of energy and hope! He stated that he knew we were all going to die, but no one knew when they would die. So he figured he had better make the most of each day, and that was why he raced. I was amazed at the attitude of this young man. He was able to take what could have kept him wheelchair-bound, and turned it into a motivation to live life to the fullest! Cancer had not robbed him of his leg, but given him an understanding of life (and therefore a zest for living) that far exceeded his years. This isn’t something that can be taught, but you can help your daughter come to these conclusions on her own.

You might also want to consider staying up with her one night (especially if it is not a work or school night). Turn out the lights as you normally would at bedtime, and light candles as I’m sure you did during the hurricane. Get a big cuddly comforter and curl up together under it. Make sure she feels safe in the very same atmosphere she experienced during the hurricane. Ask her how she feels. Without passing judgment on her feelings — not asking her to change them in any way — begin talking about all the things she dreams of one day doing. Encourage her to dream big! Ask her what it would be like to accomplish her dreams; what she would enjoy most about it. She may dream of college and grad school or trips around the world or marriage and motherhood or all of the above. Whatever her dreams, encourage her (they will change over time, so you don’t need to worry if she dreams of riding a Harley across the country with the Hell’s Angels!). Don’t worry about being directed — just let the conversation flow. When you are done, ask her if she might like to write down some of her dreams, or record them, or video them. Maybe you could take a still picture of the two of you cuddled under the comforter so she could remember this night and all her dreams.

If you find that it is difficult for your daughter to discuss her thoughts and feelings with you, consider seeking the help of a therapist such as a psychologist, psychiatrist, therapist, or counselor. It is not uncommon for teenagers to have trouble expressing their fears to their parents and loved ones. Therapy can provide a wide array of benefits and may help your daughter discover ways to cope with her fears and emotions.

Anxiety (which is often brought on by a stressful event) is probably the most common cause of difficulty falling asleep. This is called “stress-related insomnia.” It is a self-limited problem that usually resolves over several weeks (sometimes several months). It does not tend to turn into chronic insomnia. It might be helpful to reassure your daughter that it is normal to have difficulty falling asleep after a stressful life event and that she can expect her situation to improve over the next several weeks. During this time period it is important to have good sleep habits:

If stress-related insomnia doesn’t resolve within a few months, it will be important to have your daughter evaluated by a professional skilled in sleep disorders. They can lead your daughter through behavioral programs that can be helpful in her situation. These include relaxation techniques, meditation, guided imagery, biofeedback, systematic sleep restriction, and bright light therapy. All of these techniques should be done in conjunction with an expert in sleep. While it is tempting to jump right in and fix the sleep problems your daughter is having, if you don’t deal with the underlying issues first, you will be missing out on a golden opportunity to help her grow. Times like this are trying for parents. We don’t want our children to experience pain, much less to help them embrace pain. But what an honor it is to be able to help our children face the truly difficult issues of life, and grow into mature, well-adjusted adults.