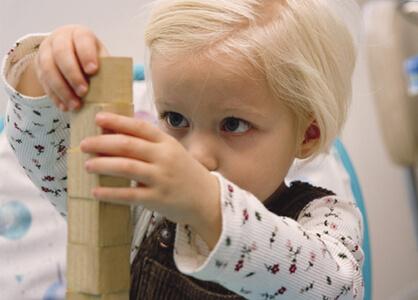 Dr. Greene, my daughter is 2 years and 8 months young and she does not speak very well. Actually, she only knows how to say some easy words such as up, come, go, mama, and maybe a couple more. I am concerned because she does not even make an effort to say more. I make her repeat words after me and we learn the alphabet together. She will repeat some easy words, but will not use them until I make her. She explains everything in sign language, but she does understand almost everything you tell her. Should I be concerned? Is it time for her to start talking? Is she a late bloomer?
Irina - San Mateo, California

What magic it is to gaze into the eyes of a newborn at a quiet moment, and to watch her gazing back at you! Irina, you are at the beginning stages of another magical time: when your daughter starts sharing with you what is going on in her amazing, unique mind.

The pace of language development varies wildly from child to child, but the pattern is often the same.

There are two sides of the language coin: understanding and speech. The two develop in tandem, but understanding, or receptive language, leads the way at each stage. Receptive language begins to develop even before birth, as babies begin to respond to, and to remember, words and voices and music — as well as the steady sound of their mothers’ hearts.

Since spoken language is easier to observe than this silent, steady growth in understanding, I will focus here on expressive language, or speech.

Babies begin by making cooing sounds — beautiful, soft vowel sounds — unbroken by syllables. As the weeks go by, they begin to experiment with varying the volume of their cooing. Within several months, they practice varying the pitch. (Note: all of this happens even in children who are completely deaf.)

Sometime in the second half of the first year, babbling begins to emerge. This is the sweet sound of consonants and vowels mixed together. The amount and quality of babbling vary, depending on how well babies hear, and how much people speak to them. The dadada sound is easier to say than the mamama sound. My guess is that, in ages past, moms heard this sound and told the dads that this sound meant “father” (to get the dads involved and make them feel better).

Babbling gives way to jargon, when kids begin to imitate the sounds and tones of adult speech. They jabber on and on, and if you didn’t know better, you would swear it must be some real language. Around this time, kids begin to point at objects around them. As we’ll see later, Irina, pointing is a key step in language development.

Kids’ jargon begins to coalesce into a few words, using the same sound for the same object, over and over again. This might be Ba for ball, or Dah for dog. The first words are usually nouns — names of people, animals, or objects that are important to them.

Symbolic gestures begin during this period. A child will pick up an object, say a remote controller, pointing it at the television, to indicate that she knows its use. Hats on the head and telephones to the ear are all symbolic gestures.

The time period for gaining the first 50 or so words is often very slow. These early words are usually very simple and useful for getting the children’s needs met. Most kids at this stage either over-generalize (all men are Daddy, all animals are doggy) or over-restrict (only my cat is kitty). Words appear and disappear in kids’ vocabularies. This slow ebb and flow causes many parents to worry — especially if they know other kids of the same age who are talking up a storm. During this slow gain in single words, a rich, complex comprehension is developing almost unseen.

An explosion of language follows, when children rapidly learn to use hundreds of words and begin combining them in unique ways (“spoon comb” for fork, or “me puter TV now” for wanting her turn at the computer monitor — you’ve been surfing long enough!). Most kids come out with delightful, original utterances during this stage — great fodder for baby book memoirs. Verbs, adjectives, and pronouns are incorporated into their repertoires. “Her goed to the store.”

After another plateau, most kids go through another language explosion, this time of sentence complexity. At first, all past tenses end with “ed” (boy falled down) and all plurals end in “s” (I like mouses and gooses). Rules of grammar begin to find their places, and at the same time intelligibility improves greatly. Others outside the family can understand whatever the child is saying.

Daddy, you can’t take a shower, Mom already took it! (dissolves in giggles)

Now, before you know it, language becomes sophisticated enough to give rise to word play. Puns, jokes, and poetry mark the flowering of this remarkable growth.

Several warning signs along the way suggest that this powerful process may need some extra help. There may be no problem at all, but a child should definitely get a hearing and speech evaluation if any of the following applies (Nelson Textbook of Pediatrics, Saunders 2000):

I mentioned above, Irina, that pointing is an important key to language development. Children who point at objects in the first year and who use symbolic gestures at 13 months are likely to have completely normal language, even if they are late bloomers.

I don’t know, Irina, if your daughter is a late bloomer who is on the perfect course for her, or if there is some obstacle (such as fluid in the ears) hindering her development. Either way, after a discussion with your pediatrician, a hearing test is the next step.

Your pediatrician may suggest other steps as well, including speech evaluations or developmental evaluations. In today’s day and age, much media attention has been focused on autism. It is important to note that developmental disorders such as autism sometimes present as concerns over speech. These are very complex disorders, though, and extensive evaluation by developmental specialists is necessary to make such diagnoses.

Even if your daughter should turn out to need some extra help, most speech problems can be successfully dealt with when discovered at this age. Because of your concern for her now, you will treasure all the more the pearls that she will eventually say to you.