Many kids develop large local reactions to mosquito bites. There's usually some reaction within hours of the bite, which progresses over 8 to 12 hours or more. The reactions can be quite dramatic, and occasionally even blister or bruise. 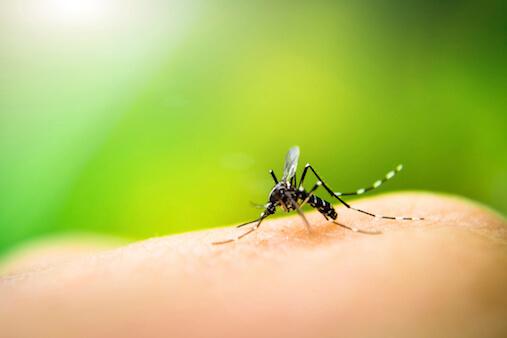 My three-year-old son has a tendency toward major localized swelling following mosquito bites. I wonder if there is anything I should do to prevent or treat the swelling? Will he outgrow this? No one in our family has allergies, so we are mystified by this situation and worry that we will have to keep him in some kind of mosquito netting for the rest of his life.
New York, NY

Many kids (including my daughter Claire) develop large local reactions to mosquito bites – charmingly called Skeeter Syndrome. It’s a reaction to proteins in mosquitos’ saliva. There’s usually some reaction within hours of the bite, which progresses over 8 to 12 hours or more, and then disappears within 3 to 10 days. The reactions can be quite dramatic, and occasionally even blister or bruise; however, thankfully they rarely become infected or cause serious problems.

The most common age for reactions to start is somewhere between age 2 and age 4, and (good news!) once it develops, most kids only have this for a few summers before the reactions disappear. It takes a few extra years to go away for kids who live in Alaska, northern Canada, and the Nordic countries.

In the meantime, the keys are preventing mosquito bites and dealing with bites that do occur.

For prevention, there is an exciting repellant created by the CDC and registered with the EPA in August 2020 – the first new, effective treatment in over a decade. It’s as effective as DEET or other strong repellants, but safe enough to drink! The active ingredient was isolated from cedar (the Alaskan Yellow Cedar. Think Grandma’s cedar chest keeping her clothes safe from moths). It’s also found in grapefruit zest and is used in our food to impart the aroma and taste of grapefruit. The active ingredient is called nootkatone, after the scientific name for the cedar. It’s effective against ticks, bedbugs, and other biting insects, in addition to mosquitos. I’m eagerly awaiting products containing nootkatone to appear on the market.

As we await the exciting newcomer, my favorite repellants are DEET-free and use picaridin as the active ingredient. Picaridin is a compound similar to that found naturally in black pepper. I prefer using one with 20% picaridin — long-lasting, at least as effective as DEET, and without the safety concerns. Two brands that meet these criteria are Natrapel and Sawyer.

Natrapel has been consistently listed as a top recommended natural insect repellent by Consumer Reports for many years.  It is widely available and comes in a couple of different forms including wipes and sprays.

Oil of lemon eucalyptus is another effective ingredient (like that found in Repel Plant-Based Lemon Eucalyptus Natural Insect Repellent). The ingredient also goes by the less memorable name PMD (P-methane-3,8-diol). It can be as effective as DEET, but only lasts 2-5 hours.

Many mosquitoes bite most actively at dawn and dusk and especially near wetlands or grass. If your son tends to get large reactions to bites, try timing your outdoor activities to avoid dawn and dusk. This can make a big difference in the number of bites he may get.

When you know your is likely to be bitten, an antihistamine like Claritin or Zyrtec once a day, taken before the bite, can reduce reactions.

After the bite, an anti-itch cream containing hydrocortisone can have a good benefit-to-risk ratio if he is uncomfortable, as well as an antihistamine like Benadryl or Zyrtec (by mouth, not topically). There are stronger medicines if the bite happens to be in a spot that interferes with vision, eating, drinking, or walking.

It is possible, but not common, for these bites to get infected.   You won’t typically see swelling or redness from infection within hours of the bite; and most of these reactions recover on their own without any need for antibiotics. However, if the bite does not progressively improve, or he develops fever, pain, or worsening redness and swelling, a visit to your pediatrician is warranted.

Last medical review on: September 18, 2014
About the Author