Moving on their Own

The truth is many babies never crawl and such babies are completely normal. They do need to find some way of moving on their own across the floor. 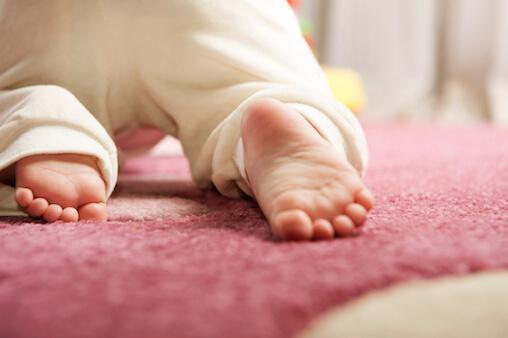 When do babies start moving around or crawling on their own?

Rolling over, sitting without support, cruising (walking along furniture), and walking independently are important developmental milestones. Crawling isn’t. This seems strange since, of any of these behaviors, crawling is most associated with babies. The truth is many babies never crawl! And such babies are completely normal! They do need to find some way to move across the floor. Each will do so at unpredictable times and in distinctive ways.

I’m reluctant to mention time frames, but somewhere between six and ten months I expect babies to discover some way to move horizontally across the floor to get desired objects. Obstacles to this include the child’s not spending enough time on the floor, using an infant walker (which often eliminates the desire to learn crawling behaviors — infant walkers are bad for proper development), having toys brought to the infant, pushing the child to learn to crawl, and physical problems such as muscle weakness. If babies actually crawl, it usually begins at around 8 to 10 months.

Crawling may be encouraged by spending time on the floor with the baby, placing favorite toys just out of reach, putting a dog-bone pillow or a rolled towel under his chest when he’s on his stomach to keep his head up so he can look around and enjoy himself more when on his stomach, or putting a hand behind his feet to give him something to push against if he tries to crawl.