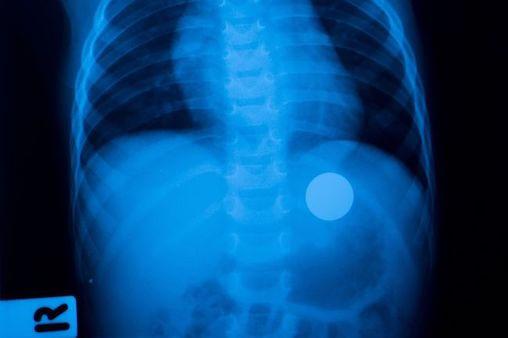 Dr. Greene, My 33-month-old swallowed a coin (or coins) about 18 hours ago. He is eating and drinking fine and does not have tummy pain. He pooped this morning but there was no sign of the coins. The doctor wants him to have an x-ray to rule out a blockage of the esophagus, she has not examined him. I want to avoid an x-ray if we can as he had a lot of abdominal and hip x-rays as a baby. Does he really need one? Grateful for your opinion.
Maureen Kilgore

Maureen, It’s not unusual for kids to swallow coins — especially dimes and pennies because of their attractive size. Coins are the most common objects swallowed, and the peak age is 6 months through 3 years. Thankfully, most pass through without a problem. But some do get stuck, often at the sphincter at the bottom of the esophagus.

Whenever there are symptoms it’s best to intervene right away. Even when there are no symptoms, if the coins have gotten stuck it’s best to remove them as soon as possible after 24 hours, before swelling and inflammation cause problems. This means knowing where the coins are.

In one study, coins lodged in the esophagus passed spontaneously into the stomach in about one-third of kids with a “simple” presentation (defined as no history of disease or surgery in the esophagus, coin lodged for less than 24 hours, and no respiratory symptoms). Once they make it to the stomach, most make it the rest of the way fine, even if it takes awhile.

Coins lodged for more than 24 hours or for an unknown duration are worth seeing where they are — about 1 or 2 out of 10 need to be removed because the coins are stuck at a sphincter. The same is true of kids who already have an inflamed esophagus or a history of esophageal problems.

Sometimes a metal detector can be used to verify that coins have made it into the belly, though this is tougher when there are two coins to track. But if a metal detector isn’t available or the results aren’t clear, the risk of not knowing where the coins are at 12-24 hours is much greater than the incremental risk of the x-ray.