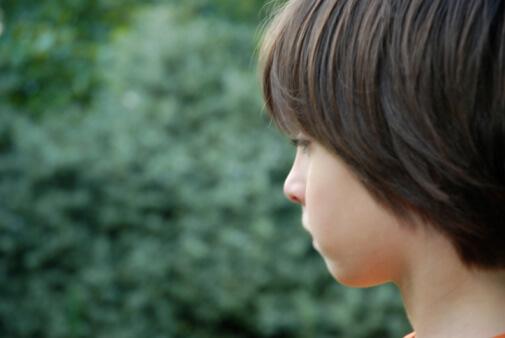 I would like to receive information about "fibrous dysplasia," also known as the McCune-Albright syndrome. Especially about the prospects.
Ingrid van Steen - Tilburg- The Netherlands

Two years ago, I first saw an otherwise healthy 9-year-old boy named Dennis. He had come to see me for a sore throat, but during the examination I noticed that he had an unusual birthmark. It was on his chest: large, light brown, with irregularly jagged borders. It stopped abruptly at the midline of his chest. On further examination I discovered that he had a notably large penis and testicles. Dennis had a rare condition called McCune-Albright’s polyostotic fibrous dysplasia.

This condition was first described by McCune and Albright in 1936 and 1937 respectively. They described the classic triad of irregular skin pigmentation, bony abnormalities, and sexual precocity.

The skin pigmentation, seen in approximately 50% of McCune-Albright patients, is often present in infancy, and is thus frequently the first sign. The characteristic lesions are called cafe au lait spots — large, flat, light brown spots. The McCune-Albright spots are distinguished by the serrated borders (called “coast of Maine”) and by their tendency to stop abruptly at the midline of the body. Many other children have cafe au lait spots, but normally they have smooth (“coast of California”) borders.

The bony abnormalities are called polyostotic fibrous dysplasia, or ineffective growth in multiple bones. On x-ray this is seen as patchy areas of osteoporosis and areas of bone thickening. This may result in repeated fractures or even skeletal deformity, most commonly in the upper femur (large bone of the thigh). The fibrous dysplasia usually progresses throughout childhood. The cafe au lait spots tend to overly the areas of most bony involvement. Rarely, thickening of the skull bone can compress cranial nerves, causing blindness or deafness if untreated.

How could this be?

When all the cells in a person do not have the same genetic make up, that person is called a mosaic. At some point early in development, one cell mutates. All of its progeny will have the same DNA code — but different from the rest of the body. The timing in development when this mutation occurs will determine what proportions of the body have the two different types of DNA. All of us are mosaics to some degree. Mosaicism is the basis for most (if not all) birthmarks. It is the basis for moles and freckles. It is also the basis for tumors.

For the first four decades after McCune-Albright syndrome was described, it was defined simply as people who shared in common the triad of characteristics described above. In the last decade, the gene coding for McCune-Albright has been found. It codes for the G protein that stimulates an important body signal called cAMP, which regulates many of the hormone-producing glands in the body.

No fertilized egg that had this defect could survive.

McCune-Albright cannot be inherited; it can only appear as a mosaic. Because this mutation occurs in different tissues in different people, the clinical condition varies widely. It is now known that the McCune-Albright defect can cause abnormalities in many of the body’s hormone systems. Some develop hyperthyroidism, some over-stimulation of the adrenal glands. A number of patients have increased growth hormone, and they can grow to be quite tall. Others end up quite short from ending puberty too early. Hormonal changes also underlie many (if not all) of the bony problems encountered.

All patients with McCune-Albright syndrome must be thoroughly investigated. Each is unique. Specific treatments are quite effective for imbalances in each of the affected systems — if the imbalances are discovered. However, once the bony lesions have appeared, deformities, repeated fractures, and pain are not uncommon.

Properly treated, the prognosis for people with McCune-Albright syndrome is excellent for longevity and intelligence. Unfortunately, Dennis’s parents didn’t believe their son could have a rare disease. After his first visit they never returned; I have been unable to locate them.