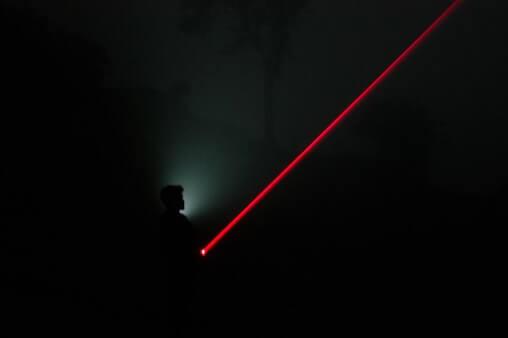 Recently a girl I know was in severe pain and unable to see after a boy had shined a laser pointer in her eye. The pain was so intense she couldn't even open her eye. What is the permanent damage? What should you do if a laser pointer has been shined in a child's eye?
San Mateo, California

This question was posed to me by two of the Charter Members of the American Association of Pediatric Ophthalmology. During a wonderful evening with John Goble, MD, and Joan Goble, MD, this delightful couple told fascinating tales of the brief history of the specialty of caring for children’s eyes (they also elaborated humorous and touching and wise personal histories–but that’s another matter). Over a scrumptious dinner, John queried me about laser pointers.

Truth to tell: I didn’t know the answer. At first I’d seen these nifty devices only in lecture halls, but recently I’ve been seeing them more and more–in movie theaters, at baseball games (Go Giants!), and this year on the key chains of many high school students. But what is the health risk?

An article in the esteemed British Medical Journal explains that the beams of laser pointers are 100 times more intense than the brightest sunlight and that a 5-mW laser pointer can cause permanent retinal damage in as little as 2 seconds (BMJ 1997; 315:1253). Children around the world have been rushed to emergency rooms or eye doctors, unable to see, with an ice pack over the painful eye. Even though the pain diminishes and the eyesight returns, attorneys have been retained to seek compensation for the long-term consequences. One individual has even been prosecuted for assault after purposely shining a laser pointer into a police officer’s eyes.

A laser (light amplification by stimulated emission of radiation) pointer is a device that transforms ordinary light into an extremely intense and nearly nondivergent beam of light of a single color, with the light waves all in synch. Depending on the intensity of the light, lasers can mobilize immense heat and power when focused at a short range. They are being used for exciting new surgical techniques.

Lasers are classified according to the maximal power output. Class 1 lasers (< 0.024 mW) are considered incapable of causing damage and carry no warning label. Class 4 lasers (>500 mW) are dangerous military, medical, or industrial lasers.

Laser pointers are class 3A (1 to 5 mW) and are required to carry a warning cautioning users to avoid shining a laser pointer beam into anyone’s eye. I agree that this is very good advice–especially if the victim is driving a car. But class 3A lasers are less dangerous than most people think. The best supported risk estimate suggests that the retina can theoretically be damaged if someone were to stare into the beam for 10 seconds (Ophthalmology 1997; 104:1213).

But as Dr. Goble pointed out, staring into a beam for 10 seconds would be nearly impossible to achieve. In this situation, 10 seconds is nearly an eternity. The pupil, blink, and gaze-averting reflexes stop significant exposures in less than 0.25 seconds. Even in the office of an eye surgeon, with a chin rest, a target, and a machine to aim the beam steadily, it is difficult to keep a beam on a single spot for more than a few tenths of a second. So, a laser pointer in mischievous hands carries no real risk for immediate or delayed retinal damage.

I would still recommend that parents prohibit children from playing with laser pointers. In addition, the FDA recommends checking to make sure that a laser pointer is designated as Class 1 to Class 3A and complies with Chapter 21 CFR (the Code of Federal Regulations) prior to buying it. In the May-June 2005 volume of the FDA Consumer magazine, the FDA published an article concerning the sale of overpowered green laser pointers. These laser pointers have increased power output, and the FDA has been working to prevent the sale of these products.

Lasers can dazzle the eyes. Both pain and dazzle spot images are common results of looking at a laser beam. Flash blindness, a temporary loss of vision, can occur. This has given rise to panic in many individuals. Although laser pointers have never been found to cause permanent eye damage, they have produced hysterical blindness–people who can’t see because they are convinced they can’t (The Lancet 1998; 351:1291).

A New Year’s toast: May each of us see and achieve those things that have been put off simply because we thought we couldn’t.