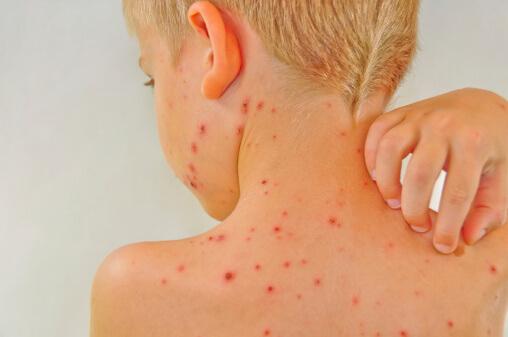 Dr. Greene, roughly a week ago we were visiting some friends. As we were leaving, they informed us that their oldest boy had had the chickenpox, that he was no longer contagious, and was returning to school the next day. (Nice of them to wait so long to tell us! We would never have gone in if I'd known!) My concern is that they have two other children who have since come down with the chickenpox. What are the chances of my little one getting them? We were there about 30 minutes. I know the incubation period is usually 10-20 days. So we are waiting and worrying. Part of the reason that I 'm writing is a friend of mine's little boy had them when he was about my son's age (8 1/2 months) and he ended up in the hospital because they were so bad. Is there anything we can do to "prevent" them? What should we do if he gets them? Are there any special things we should do? Thanks so much, I hope we don't need to know, but just in case.
Melinda Stephens - Sherwood, Oregon

Melinda, as I read your question I could picture your friend’s little boy lying in the hospital bed, with your friend leaning protectively over the baby, an arm cradling his head. What a vulnerable feeling, to have one’s child hospitalized. No wonder you are concerned.

Unfortunately, chickenpox is one of the most contagious childhood illnesses. The disease is usually mild, although serious complications sometimes occur, as your friend discovered.

People who have chickenpox become contagious 24 hours (and sometimes as long as 48 hours) prior to breaking out. The rash has been described as a “dew drop on a rose petal” because the classic skin lesions are small, clear fluid filled blisters surrounded by a pink halo. These blisters crust over before healing. Children remain contagious while uncrusted blisters are present, usually one week or less after breaking out. Your little one was only exposed if he was around the infected children either while they had spots or one to two days beforehand. If your son was exposed, he could break out with the chickenpox anytime between ten and twenty days after the exposure (usually 12-16 days).

For children past their first birthday, the chickenpox vaccine can be helpful in preventing it, even if given after an exposure. In otherwise healthy children before one year of age, there is generally nothing that is done to prevent infection.

A safe, effective medicine called acyclovir, or Zovirax, is available if your child does break out with chickenpox. In 1991 a large, well-conducted, multicenter trial of acyclovir therapy for normal children with chickenpox was published in the New England Journal of Medicine. Acyclovir was given within twenty-four hours of the onset of the pox. Children received it four times a day for five days. The children in the treatment group had significantly fewer pox, a shorter duration of forming new pox, reduced itching, earlier healing, and less scarring than the children in the untreated group. There was also a smaller chance of fever, a shorter duration of fever, and an accelerated resolution of all other symptoms in the children treated with acyclovir. A more recent study published in October 2001 in the Pediatric Infectious Disease Journal confirmed that acyclovir did help shorten the duration illness. This study also found that the earlier acyclovir was started, the better. If your child breaks out with chickenpox, contact your pediatrician within twenty-four hours for more information regarding the option of treatment with acyclovir.

Other measures are aimed at keeping the child comfortable during the infection. Aveeno Bath (or other oatmeal bath) in lukewarm water provides a crusty, comforting coating on the skin. Bathe the child every day, and trim the fingernails short, to reduce secondary infections and scarring. Benadryl Elixer by mouth will help to ease the itching, as will topical lotions such as Calamine or Sarna. Most children will have recovered within the week.

For you, Melinda, your little one may not have even been exposed. If he was exposed, there is a good chance that he won’t get the chickenpox. Beyond that, the odds are strong that if he does get the chickenpox it will be a mild case (even without treatment), and effective treatment is available, if needed.