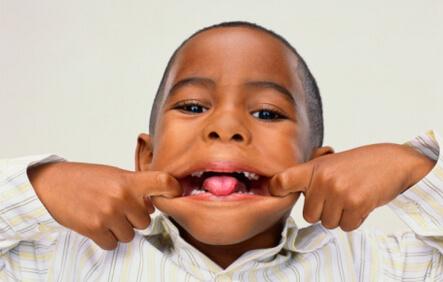 Dr. Greene's HouseCalls have been a great help to me. Just finding out more about things I have questions about is informative and helpful to me with a 6-year-old, a 10-month-old, and a baby on the way. The information on ear infections has answered lots of questions and eased concerns. Now, Dr. Greene, my daughter has geographic tongue. What is that exactly and what causes it?
Cheryl Farrell - Clyde, North Carolina

Cheryl, you certainly have your hands full. What an exciting (and busy) time lies ahead! Two in diapers is always a challenge – especially when they are numbers two and three. Be sure to ask for the help you need.

Geographic tongue is a marvelous, descriptive name for one of the most common medical conditions of the tongue. Parents usually are the ones to notice several large, red, slightly depressed, unusually smooth patches on the surface of their child’s tongue — when nothing was there hours before. Often the red areas are bordered with distinct white bands. The sharp borders of these irregularly shaped lesions give the surface of the tongue the appearance of a map, perhaps a map of a group of uncharted islands. The rather dramatic appearance of geographic tongue looks to many like a burn, or like some kind of nasty infection.

How many parents must puzzle over geographic tongue? The exact prevalence varies widely from study to study, but at any given time, somewhere between 0.1 percent and 14.3 percent of otherwise healthy people have it. It has been found to be present in about 0.6 percent of Americans (Community Dental and Oral Epidemiology Aug 1994), about four percent of healthy Iraqi schoolchildren (Community Dental and Oral Epidemiology Aug 1982), and about 2 percent of young Finns (Oral Surgery, Oral Medicine, and Oral Pathology, Feb 1982).

The healthy tongue is a mass of muscle fibers covered by a mucous membrane. On the underside of the tongue, the mucous membrane is smooth. On the upper side, the tongue is covered with many tiny protrusions called papillae. These papillae come in four types with different shapes. Three of these types contain taste buds; the fourth does not. This fourth type are called filiform papillae, and they are packed tightly together over the entire upper surface of the tongue.

For some reason, medical conditions of the tongue often have picturesque names (such as “black hairy tongue” or “scrotal tongue”). Most of these conditions are abnormalities of the papillae, of one type or another. In geographic tongue, the filiform papillae are missing in the reddish areas and are overcrowded in the gray-white borders.

We still do not know exactly what causes geographic tongue, but we do know that it strongly tends to run in families (Oral Surgery, Oral Medicine, and Oral Pathology, Nov 1976). Geographic tongue has polygenic inheritance — it is associated with several different genes. We also know that it is associated with a number of other genetic medical conditions.

It has been most closely linked to psoriasis, and is notably more common in those who have psoriasis (British Journal of Dermatology, Sep 1996). The two conditions have been linked to the same gene and are probably produced in the same manner; nevertheless the great majority of those with geographic tongue do not go on to develop psoriasis.

Geographic tongue is also significantly more common in people who are sensitive to the environment — those with allergies, eczema, and/or asthma (Oral Surgery, Oral Medicine, and Oral Pathology, Aug 1984).

In young women with geographic tongue who are also taking oral contraceptives, the geographic tongue is worst on day 17 of the cycle (British Dental Journal, Aug 1991). This suggests that hormone levels probably play a role. Perhaps there is even some truth to the unproven belief that stress can trigger geographic tongue.

Weaker links have been reported to anemia, seborrhea, and eating spicy foods.

Most people with geographic tongue are otherwise healthy. The condition is usually entirely painless. While it can produce a burning sensation in the mouth, this is very rare in children. If there is any pain or burning, this usually can be successfully controlled with antihistamines (Pediatric Dentistry, Nov 1992).

There is no loss of the sense of taste (hurrah for the glorious sense of taste!), nor is there any loss of the dexterity of the tongue. There is, however, a measurable decrease in the tongue’s sense of touch. This was studied by carefully assessing response to mechanical vibration (Journal of Laryngology and Otology, Mar 1984).

Geographic tongue’s rather spectacular appearance in the mouth has frequently caused parents to worry. In the years since 1955, when the condition was first described (Journal of the American Dental Association, Sep 1987), several treatments have been tried for geographic tongue. Topical Retin-A was the most successful (Cutis Aug 1979). No treatment is currently recommended, however, for this benign, self-limited condition.

Geographic tongue heals spontaneously. The individual lesions often heal at the same time new ones are forming, changing the appearance of the tongue over hours or days. This gives rise to the appearance that the map is migrating across the face of the tongue. Thus, geographic tongue is also called benign migratory glossitis. Although benign, this condition may last for months — or even longer — and often recurs.

The same pattern holds true for the rare, but real, variation — geographic lip.

In the future we may know more about geographic tongue, what causes it, and why it recurs. In the meantime, Cheryl, you can rest assured knowing that even though geographic tongue is spectacular in appearance, it will not harm your precious daughter.