Babies gender is difficult to discern (unless you look under their diaper). A defining change from baby to toddler is a dawning gender identity. 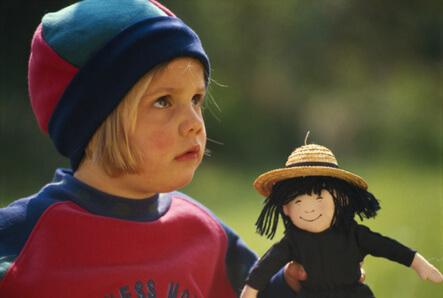 Dr. Greene, my little boy likes playing with dolls. In fact he wants a Barbie for his birthday. My husband is very upset about this. Is he okay? What should we do?
Talia - New York

“Your little girl is sooo adorable.” “He’s a boy!”

It’s easy to tell a boy baby from a girl baby – if he’s naked, or if she’s dressed in pink. But if you catch a baby wearing nothing but a diaper, you’ll find that although the proud parents know that the gender is obvious, boys and girls look and act similar enough to fool even pediatricians.

Whether we are conscious of it or not, we feel strongly about the gender of our babies. If someone calls our her a him, we get just a little defensive. We dress her in a way to remove doubt. We pierce her ears or put bows in her hair. Even though we might want to avoid stereotyped gender roles, we want the world (and our daughter) to know that she is a she.

Much of what little children learn, they learn by imitation. My little son taps his toothbrush against the sink 5 times to shake the water off after he has brushed his teeth – exactly like I do. Among other things, kids copy our awareness of their genders.

He’s not a baby any more!

Part of the defining change from being a baby to becoming a toddler is this dawning gender identity. By 18 months most children know their sex. They don’t look like babies any longer. They look and act and speak like little boys or little girls.

Between 18 and 30 months most children learn that genders persist, that boys become men and that girls become women. The desire to imitate the same-sex parent becomes quite strong.

This imitation is by no means limited to the same-sex parent.

What a sight! A little boy clomping about the house in a pair of high heels, a necklace swaying with each step, bright red lipstick painted exuberantly on his face. The first such moment is an adorable, comical scene, but what if he really likes it? What if he prefers dolls to trucks?

Almost all healthy toddlers will copy and enjoy behaviors of the other gender. This kind of play is expected and desirable. Often toddlers will imitate many activities of the opposite sex. In one study, 22.8 percent of boys and 38.6 percent of girls enjoyed 10 or more gender-atypical behaviors (Nelson Textbook of Pediatrics, Saunders 2000).

For most children, the best way to handle this is to not draw a lot of attention to it one way or the other. Certainly don’t punish them. Be careful not to belittle or criticize them for what they like. By school age, this experimentation usually gives way to new interests.

When might this experimentation indicate a something else is going on? Several warning signs can tip you off that gender issues bear looking into: