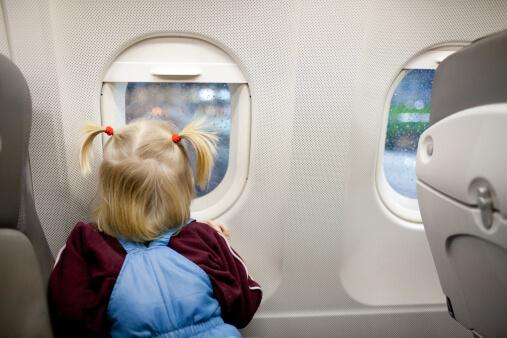 Is there any reason an 18-month-old cannot fly after ear tube placement? Her mother in Boston is trying to use this excuse to keep my daughter from coming out to California in April as ordered by the courts. Please help!
Andrew Collins - Sacramento, California

The decision to have ear tubes placed in a child’s ears is many-faceted, but with that decision behind you, the decision about flying or not becomes quite easy.

In children without ear tubes, pain results from stretching of the eardrum caused by pressure. As the airplane takes off, the air inside the airplane gets thinner. Most airlines pressurize their cabins to blunt this effect, but still the pressurized cabin is equivalent to air at an altitude of about 7,000 feet. The air in the middle ear space expands along with the air in the rest of the cabin. As it expands, the air is easily forced through the eustachian tube; the eustachian tube automatically opens from the pressure. As long as there is no active, complete obstruction of the eustachian tube, the excess air exits the middle ear with a popping sensation, but little or no pain. Again, during ascent this process is spontaneous.

During descent, as the air pressure rises, the middle ear space needs extra air to re-equilibrate the pressure. However, during descent, the eustachian tube does NOT open spontaneously. A tiny muscle opens the eustachian tube only during swallowing, yawning, or crying. In children, this mechanism is less efficient than in adults. The rising pressure stretches the eardrum inward and can cause pain until air rushes into the middle air space and the ears pop.

The next time you hear a child crying during an airplane’s descent, remember, this is one instance where crying itself helps to solve the problem.

Children with ear tubes in place may fly freely, without fear of pain upon descent or increased risk of ear infections. Flying is safer and more pleasant for children with PE tubes than for other children.

Whenever I hear of one parent using any excuse to keep the other parent from spending time with their child, I am deeply grieved. Even if there were pain upon descent or greater risk of infection due to a cross-country flight, I would still recommend that a child be allowed to fly in order to spend time with a non-custodial parent. That is how important it is for children to get to be with both parents!

I’m sure that when your daughter was born, both you and her mother had dreams of what life as a family would be like. No matter what the circumstances surrounding the breakup of that family, both of you have experienced a great deal of loss. Your daughter’s mother must feel wrenching pain at the prospect of being without her little girl, even if it is for a short time. I’m sure she must love your daughter a great deal. Now, in spite of her loss, it is time to do what is best for your daughter and comply with the court-ordered visitation schedule.

Your little girl needs quality time with her mother and her father in order to grow up to be a healthy, secure adult. Having ear tubes in place makes it easier, not harder, for that to happen.

If it would help in any way, please feel free to print this answer and share it with both your daughter’s mother and with the judge. As an advocate for your daughter, I’m sure the judge will appreciate your concern for her well being and her need to spend time in her father’s home.

Last medical review on: November 01, 2008
About the Author