Are Flat Feet a Cause for Concern?

Flat feet in toddlers can be normal and may resolve without treatment. If flat feet are an issue, it will often become apparent shortly after babies begin to walk. 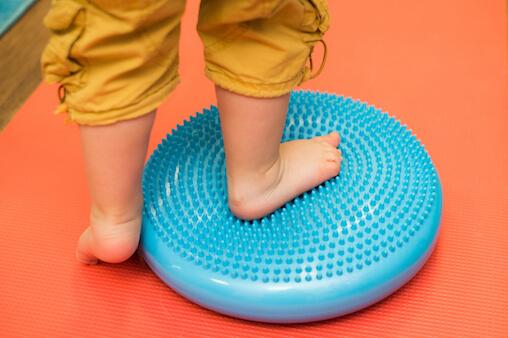 My 2-year-old daughter has flat feet. Now that she can talk to me, she cries almost every night because her feet hurt her so much. I'm wondering if I should have her fitted for foot molds now? Will this problem ever correct itself and go away? Or will this be something she has to deal with for the rest of her life?

I remember a friend who was unable to join the army because of his flatfeet. At the time, I thought it was great (even though he was disappointed). I can imagine you listening to your daughter’s crying in the middle of the night. It’s never comfortable to watch our children in pain. And in the background, is your natural concern that this might limit her in the future. And the loss of sleep (for both of you) makes everything worse and makes everything seem like it will go on forever.

The appearance of flatfeet can be a normal part of development. In young children, it is normal for the ligaments that hold together the bones of the arch of the foot to be lax and flexible and also normal for there to be fat padding the arch, so that the foot appears flat.

This is a common variation on normal, causes no symptoms, and does not need or respond to special shoes or inserts. It usually goes way or improves significantly by age 6. The condition is only a matter of appearance-this type of flexible flatfoot does not limit or hinder a child in any way.

If the feet seem rigidly flat, or if there are symptoms such as pain (as is the case for your daughter) or abnormal shoe wear, then a child should be evaluated by a pediatric orthopedist. For some of these children, arch supports do appear to be helpful-and sooner can be better than later.

Many will still outgrow the problem entirely. X-rays are sometimes able to clarify what is going on. For many kids, though, it is difficult to predict whether or not this will be a long-term problem until the children reach age 6 or so. Before that time, the arch continues significant growth. By about 6, the arch has completed most of its normal development and the ligaments have tightened up to hold it in place. Physicians can then predict what further improvements there might be.