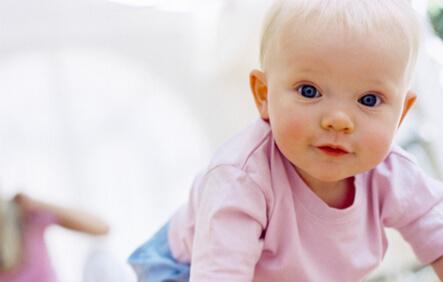 My 7 1/2 month old grandson isn't crawling yet. Although he sits alone, he doesn't seem much interested in moving around on his stomach. My daughter has tried to show him how to crawl by moving his arms and legs, but he just gets upset. He even cries when he's placed on his stomach. Any advice?
Alberta L. Richetelle - Farmington, Connecticut

During the 20th century we have begun to understand the process of normal child development. It’s exciting to know what to expect at different stages, and to be able to relate to children more appropriately.

One downside of this newfound knowledge is the increased tendency to compare children both to each other and to average ages of attaining developmental milestones. We feel proud when a child is ahead of his peers, and are concerned when he seems to lag behind. The philosopher’s stone of child development is found when we realize that the charts and tables are nothing more than stereotypes. Each individual child develops and blossoms in his own way, at his own pace.

This is our goal: to provide a nurturing environment where a child can develop at his optimum pace. We don’t want to hurry him; we do want to encourage him. We also want to identify anything that may be an obstacle in his path.

Crawling isn’t even mentioned in my favorite pediatric development textbook!

This seems strange since, of any of these behaviors, crawling is most associated with babies. The truth is many babies never crawl! They do need to find some way to move across the floor. Each will do so at unpredictable times and in distinctive ways. Your grandson may be a scooter, one who likes to stay upright and scoot across the floor on his bottom. Many babies prefer creeping, or wriggling forward on the stomach. Many children will crab-crawl, moving backwards. And, of course, many children will get up on all fours and crawl forward in the traditional way. Each child is unique.

Some adults are concerned that children who don’t crawl in the traditional way will be less coordinated. This is a myth. As long as the baby begins to move across the floor using each arm and each leg, there is no cause for concern.

I’m reluctant to mention time frames, but somewhere between six and ten months I expect babies to discover some way to move horizontally across the floor to get desired objects. Obstacles to this include the child’s not spending enough time on the floor, using an infant walker (which often eliminates the desire to learn crawling behaviors — infant walkers are bad for proper development), having toys brought to the infant, pushing the child to learn to crawl, and physical problems such as muscle weakness. If babies actually crawl, it usually begins at around 8 to 10 months.

Crawling – and moving in general – may be encouraged by spending time on the floor with the baby (called “tummy time” by many parenting resources). Consider placing favorite toys just out of reach, putting a dog-bone pillow or a rolled towel under his chest when he’s on his stomach to keep his head up so he can look around and enjoy himself more when on his stomach, or putting a hand behind his feet to give him something to push against if he tries to crawl.

Observe your grandson’s spontaneous play. This will give you the best clues to the developmental tasks that are important for him to learn next. Children tend to be most excited about skills they are on the brink of mastering. If you try to engage him in an activity that is beneath his developmental level, he will quickly get bored. If you try to interest him in something that he is not yet ready for, he will become upset. (Note: babies don’t tend to cry when they fail, but rather when the activity isn’t at the right developmental level). Our task is to find that zone of moderate challenge — where learning is fun. Provide situations where he can teach himself through playful exploration. Forced teaching hinders development. These principles apply equally to “gifted,” “average,” and “special-needs” children.

Don’t push him; don’t force him on his stomach if he’s unhappy; don’t try to get him to move his arms and legs. Relax. Enjoy him. Remove any obstacles to crawling that you can identify. Gently encourage him. Marvel as the inner drive to grow propels him forward, oh so fast.