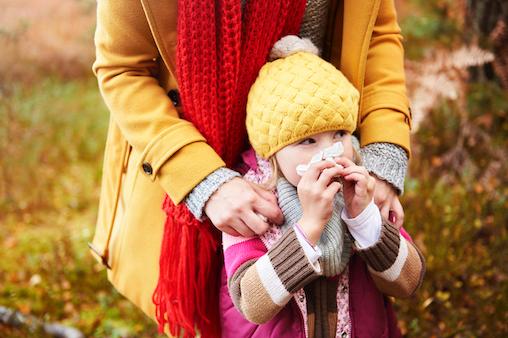 My son is four months old. The baby sitter takes the kids outside. It's rather cold and windy here in Japan. Is it dangerous to my son's lungs or respiratory system to inhale cold air?
Japan

For generations, parental wisdom has held that cold air is not good for children’s respiratory systems. In particular, cold air has been thought to cause colds (thus the name). Earlier medical traditions have tended to agree with folk wisdom. Over the last fifteen years or so, the prevailing medical opinion has shifted to a different point of view. The more recent thinking is that cold air does not cause colds, bronchitis, pneumonia, or other respiratory infections. Scientifically designed experiments have been carried out to prove the theory that cold temperatures do not cause the common cold.

Studies conducted at the University of Virginia made the news when healthy adult volunteers cavorted in the snow with few clothes on and were found no more likely to catch respiratory infections than their companions indoors. Subsequently, at McMurdo Station, a US research base in Antarctica, several important studies have been carried out. (What better place to study the effect of cold temperature than Antarctica?) People in isolation at this base tended to get no colds at all — unless visitors came from the outside. Specific viruses that the visitors brought to the station worked their way through the research compound at a rather leisurely pace, approximating the rate of cold acquisition in other climates. This demonstrated that cold temperature itself does not cause colds.

The scientific studies are rather convincing, but let’s consider other known impacts of cold air on the respiratory system. First, cold air affects an important defense mechanism — mucus transport. The entire respiratory system is coated with a very thin layer of mucus called the mucus blanket, which rests on tiny hairs called cilia. This mucus blanket traps particles and organisms before they can reach the lungs. This constantly moving blanket acts as a conveyer belt to move the particles out of the respiratory system. Proper action of the mucociliary blanket depends on the mucus having the appropriate mixture of stickiness (to catch the particles) and fluidity (to move the particles up and out). When this is altered by dry air, irritating chemicals, cigarette smoke, or any other factor, the respiratory system becomes more susceptible to infection. Cold air stimulates an increase in mucus production, but like other substances, mucus becomes thicker in colder temperatures. Thus, inhaled particles are cleared less easily when a person breathes cold air.

The second area where cold air impacts respiratory health is in the nose. The nose is a remarkable organ designed to condition inhaled air in order to protect the delicate lung tissues. Whether the inhaled air has a relative humidity of one percent or ninety percent, the nose adds or extracts moisture so that air reaching the lungs has a constant relative humidity of about 75%. The same is true of temperature. When breathing through the nose, one may breathe in air at 40 degrees Fahrenheit or at 100 degrees Fahrenheit, but within a quarter of a second the air temperature is quickly brought to 98.6 degrees. Many tiny blood vessels are used to affect a temperature exchange. When a person breathes cold air, the tissues lining the nose swell as the capillaries dilate, bringing warm blood to heat the cool air. Excess blood in the nose is the cause of nasal congestion (nasal congestion is backed up blood, not increased mucus). In addition to the congestion, the mucus normally present in the nose becomes increased and thicker. Cold air, by itself, can produce nasal congestion and stuffiness, which again make it more difficult for the body to remove inhaled viruses and bacteria.

The third area of impact is in the lungs themselves. If cold air reaches the lungs, the lungs respond by releasing histamine. In people with sensitive airways or asthma, this causes wheezing. In fact, many theorists believe exercise-induced asthma is actually triggered by room-temperature air reaching the lungs in large quantity due to mouth breathing, rather than directly from exercise itself.

Piecing the available evidence together, I draw a different conclusion than either traditional wisdom or current medical opinion — 1) It is clear that in order to catch a respiratory infection of any type, one must be exposed to the causative organism; 2) If exposed, however, it is more likely that an individual will become sick if he or she has been breathing cold air.

With this in mind, here are some ways to minimize the risk of getting a cold:

As is often the case, when parents and scientists tend to disagree, both sides have important parts of the truth. In synthesizing the two views, a more accurate view emerges.

Last medical review on: September 30, 2009
About the Author