Gray hair in children is called premature graying. The appearance of gray hairs may be the result of a child's genetically determined maturational schedule. 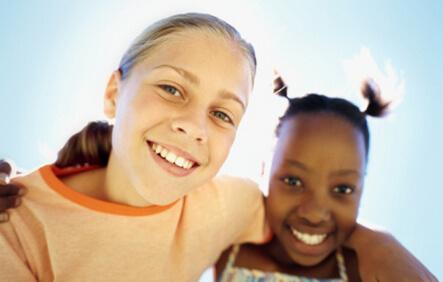 My 4-year-old son has had scattered gray hairs for about two years. Does he have a vitamin deficiency? Does this mean he will be prematurely gray?
Debbie O'Leary - Indiana University - Bloomington, Indiana

Hair color is produced by tiny cells called melanocytes that live within the hair follicles. In the course of a lifetime, the activity of the melanocytes in each follicle begins to wane, resulting in gray hairs. Each individual’s melanocyte-clock is different, but in Caucasians this reduction of melanocyte activity usually occurs earlier than in other groups. If gray hairs appear in childhood, this is called premature graying, or canities (pronounced kah-nish’-eez).

The appearance of gray hairs may be the result of a child’s genetically determined maturational schedule. If so, it is likely (but not certain) that others in the family tree would have followed a similar schedule. If these others had scattered gray hairs in childhood, but did not progress to a full head of gray hair until later, then it is likely that your son would follow the same pattern. Gray hair can also accompany a number of uncommon familial syndromes, including neurofibromatosis and tuberous sclerosis.

Causes of Gray Hair in Children

Several conditions can alter a child’s preset melanocyte-clock. If these conditions are present for a short time, a few scattered gray hairs may be the result; if they persist, the graying is likely to progress.

The most common of these is vitamin B12 deficiency. Vitamin B12, or cobalamin, is present widely in foods from animal sources. Dietary deficiency is difficult to achieve, unless a person is eating a strict vegan diet. Breast-fed infants whose mothers have B12 deficiency can also develop a transient deficiency. A lack of vitamin B12 can occur even in the face of adequate B12 intake. The body’s ability to absorb and use B12 can be hampered by surgery involving the stomach or small bowel, diseases affecting the small bowel (e.g. regional enteritis, necrotizing enterocolitis, tuberculosis, diverticulosis, or fish tapeworms), or a congenital lack of the molecules needed to absorb B12 (intrinsic factor or Transcobalamin I, II, or III). A simple blood test can diagnose current vitamin B12 deficiency. If your son’s gray hair resulted from a prior deficiency that has resolved, it will probably not be detectable by a current blood test; however, the graying will not progress in this case.

Some Types of Anemia

Some anemias — the megaloblastic ones (including the anemia caused by B12 deficiency) — can produce gray hairs as an early sign. A simple blood test detects current anemia. As in the case of B12 deficiency, previous anemia is not easy to detect, but will not continue to affect your son’s melanocytes.

Several thyroid disorders, particularly hyperthyroidism, reduce melanocyte activity while they are present. Disorders of skin pigmentation, such as vitiligo (which follows the destruction of melanocytes in the skin), can also result in a loss of hair pigmentation. A rare entity called Vogt-Koyanagi syndrome occurs in some children following a viral illness. In an attempt to fight the virus, the body makes antibodies that, unfortunately, also attack the melanocytes.

So, Debbie, it is possible that your son has a vitamin deficiency. It is also possible that the gray hairs are a visible sign of an important internal process. Gray hair in a child should be investigated. When I see a child with gray hairs in the office, I look to three sources to try to determine the underlying cause. First, I find out what I can about the family history. Next, I perform a thorough physical examination looking for helpful clues. Finally, I obtain three laboratory tests: a vitamin B12 level, a complete blood count (CBC), and a thyroid function panel.

Even if we are unable to identify any cause other than his own internal melanocyte-clock, you can readily mask the graying if desired. Although a number of effective chemical rinses and dyes are available, there has been some evidence that their use in children may contribute to later skin cancers. This risk is avoided with vegetable dyes.

Last medical review on: January 20, 2022
About the Author