Obesity is the generalized accumulation of fat both beneath the skin and throughout the body. Childhood obesity has reached epidemic proportions. 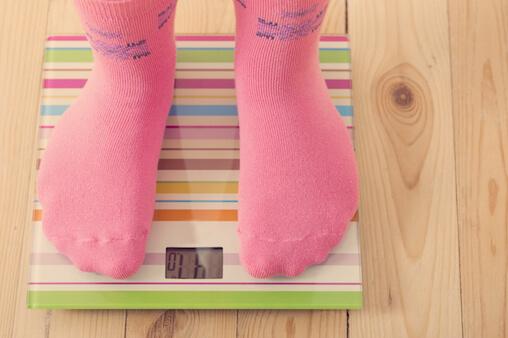 Thank you, Dr. Greene, for this service. You help me so much with some problems of my child. But now I would like to know about the problem of childhood obesity in my four year old girl. Her weight is 33 kg and her height is 1.09 m.
Dolores A. de Ortega - Chihuahua, Chihuahua Mexico

Obesity, or over-nutrition, is the generalized accumulation of fat both beneath the skin and throughout the body. Some children are big, or stocky, because they have large skeletal frames. They are not obese. There are general guidelines for appropriate weight for a given height, but these are only general guidelines.

Obesity is usually caused by an individual’s eating more food than is necessary for him or her. Less activity than the individual needs can also cause obesity, but this is less common in children. Whatever the cause, certain children inherit a genetic predisposition to obesity. They may eat the same diets as thinner children, but store more of the calories as fat.

The body stores new fat either by increasing the number of fat cells or by increasing the size of existing cells. It is particularly important to control childhood obesity since new fat cells are primarily formed during childhood. Each year of adding these extra fat cells makes adult obesity more difficult to fight.

A variety of hormonal disorders, including problems with insulin, hypothalamic hormones, and pituitary hormones, can cause severe obesity. There are also a number of rare inherited syndromes (such as Laurence-Moon-Biedl, Prader-Willi, and Cushing) that produce obesity. If a child’s height is appropriate or advanced for her age (like your daughter’s), and if a child has a strong family history of obsesity, one of these underlying medical conditions is extremely unlikely. On the other hand, an obese child with slow height growth should certainly be evaluated.

As childhood obesity has become more common, we are seeing more and more children with hypertension (high blood pressure) and with insulin-resistant diabetes mellitus. For decades, we have seen that these diseases cause serious chronic medical problems as adults – we are now seeing these chronic problems in children as well! While there is still some controversy surrounding when to screen and treat children for high blood pressure and high cholesterol, I would suggest that all parents of overweight children discuss this issue with their pediatrician.

Obesity is very difficult to treat, since it involves permanently changing basic eating and exercise habits. Successes almost always involve changing the whole family’s habits to ones appropriate for the obese child. As we all know, healthy eating and exercise habits are good for us all! Cutting excess intake is best achieved by first keeping a careful record of food consumed, to identify particularly high fat or high calorie problem areas in the diet. The entire family must learn what fat is and what foods are high in fat (such as cheese, butter, margarine, nuts and nut-butters, oil, red meat, fried foods, most processed fast foods or snack foods, etc., etc.). Instead, whole fruit, whole vegetables, and whole grains should make up the bulk of the diet. Whatever the daily activity level of the family, it should be modestly increased.

Most families are not able to make these lasting changes on their own, and will benefit from meeting with an independent party at least once a week for 12 weeks. Ideally this outside individual would be a nutritionist or an expert in weight management, but even a committed friend would do. In many cities pediatric weight management programs such as Shapedown are available, and are very effective. Whatever the source, monitoring should continue at least monthly for the remainder of the first year, and then every 3 to 4 months until the new habits have become very deeply ingrained.

Note: Shapedown is a program that was started at the University of California at San Francisco. You can obtain information about that program or similar programs in other areas by calling (415) 453-8886 or by visiting www.shapedown.com.

Stanford University Hospital also has a program called the Packard Pediatric Weight Control Program. They can be reached at (650) 725-4424 or by visiting: www.lpch.org/.