Bidis are more Dangerous than Cigarettes 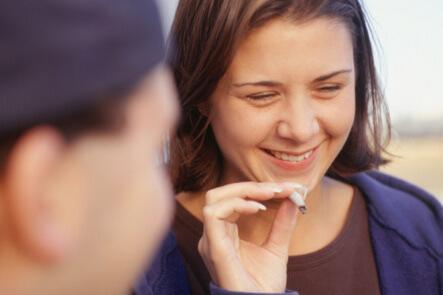 Dr. Greene, my daughter has started smoking a new kind of chocolate cigarette called a "bidi". She assures me they are all natural and not harmful at all. She says they contain no drugs. Do you know about them? Are bidis safe? She also smokes vanilla and strawberry bidis.
Concerned Parent - San Francisco, California

Bidis are all the rage among teens. It is estimated that 3% of high school students and 2% of middle school students smoke them regularly. Dessert and smoking literally rolled into one! But this makes me rage! People who are trying to make a fortune have succeeded in putting another one over on our kids. Bidis are not new, and they are certainly not safe!

Soon after the Europeans discovered tobacco in the New World, Dutch and Portuguese traders decided to introduce tobacco to India and the East so that they would have highly profitable goods to carry in their ships in both directions.

For centuries now, the bidi, cheaply made from inferior ingredients, has been the cigarette of choice for those in poverty in India. Called “the poor man’s cigarette,” the bidi is made from the flakes and dust of dark tobacco leaves. Strong flavoring, such as vanilla, licorice, strawberry, cinnamon, or clove, is added to mask the poor quality of the tobacco. This concoction is then hand-rolled in a green or brown leaf by impoverished laborers in oppressive “factories.” The unfiltered final product is a small, slim cigarette, tied at both ends with a colorful thread.

I have not heard of bidis in the United States containing illegal drugs, though I have heard of opium-laced bidis in China. In some provinces of China, puffs from lighted cigarettes are given to infants and toddlers to stop them from crying (Tobacco Control, 1993; 2:7-8).

Bidis have long been popular among the poor in Bangladesh, Pakistan, Afghanistan, Sri Lanka, Cambodia, and India who could not afford regular cigarettes. A single pack of bidis costs up to 40% of their average daily income. Bidis are now more popular than regular cigarettes in India, Bangladesh, Pakistan, and Nepal. Oral cancers have become the leading cause of cancer throughout this region, with 90% attributable to tobacco use (Tobacco or Health: A Global Status Report, World Health Organization, 1997).

India now produces more tobacco than does the United States and is a world leader in oral cancer. (India and the United States taken together produce only a fraction of the amount that world-leader China produces in conjunction with American tobacco companies).

Now bidis are arriving on the shelves of convenience stores and gas stations across the United States. Touted as new, cool, safe, and natural, the bidis are priced right for the teen budget – only $2.00 for a pack of 20.

Smoking bidis has been independently proven to cause:

The sweet-smelling smoke of bidis is dangerous–more dangerous than cigarettes. I am angry that they are being marketed to children.

Each bidi cigarette is loaded with cancer-causing, chromosome-damaging, genetic poisons, far more than are found in a regular cigarette. “The safe alternative” also contains two to three times the tar and nicotine of regular cigarettes. In a chilling experiment, smoke from regular cigarettes and bidis was given to Swiss albino mice. Bidi smoke reliably caused cancer in doses small enough that the regular cigarette smoke left the mice apparently healthy (Journal of Cancer Research and Clinical Oncology, 1988; 114:647-649).

And our children naively inhale this toxic smoke, without even the benefit of a filter.

But our teens do not care about this. Their sense of invulnerability prevents them from fully appreciating the long-term risks. So, if you have preteen or school-aged children, start talking to them now about bidis. They are still at an age when knowledge of these consequences can prevent them from being duped later on.

Teens might care, though, that when smoked during adolescence, bidis hasten the closure of the growth plates in the long bones–stopping them from ever reaching their full height. Those who smoke as few as two bidis daily for as little as 2.5 years have been proven to end up significantly shorter than their peers (Journal of Epidemiology and Community Health, 1980; 34:295-298).

Because of their sense of justice, teens might care about the poor working conditions of the impoverished factory laborers rolling their bidis. This “natural” product is produced in toxic conditions. Even those who never smoke a bidi are damaged by the mutagenic and carcinogenic compounds in the air (International Archives of Occupational and Environmental Health, 1992; 64:101-104). The dust mutates their skin and damages their chromosomes (Journal of Cancer Research and Clinical Oncology, 1994; 120:485-489). They get sick and die at an alarming rate just from making the bidis (Mutation Research, 1995; 334:139-144 ).

Teens might also care that shrewd marketers are playing them for fools. The fiendish, sweet-smelling smoke wafting through teen hangouts is the scent of profit for savvy businesspeople.

The Associated Press reported on May 10, 1999, that 58% of students in four San Francisco High Schools have already tried bidis. This is alarming! Let’s get the word out.