There are several kinds of torticollis. If your child's doctors has diagnosed your child with benign paroxysmal torticollis, physical therapy is the primary treatment. 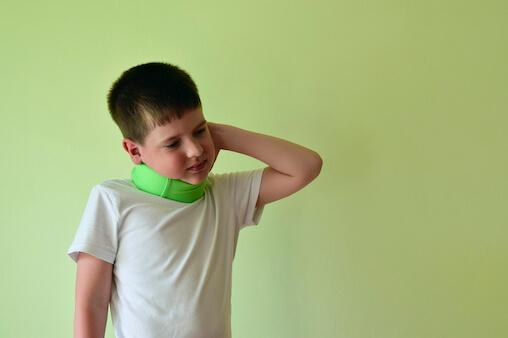 Within the first 2 months of life, my son was diagnosed with both torticollis and double hernias. The hernias were fixed with surgery, but the torticollis just won’t go completely away. He is now 3 and though the "episodes" still come, they are not as often, but he lists to one side all the time. We were told by our orthopedic doctor that it was “intermittent torticollis”, but Shriners of California said there is no such thing. He has had an MRI of his neck and spine, and x-rays too. Will this ever go away? He is in pain the day before he goes crooked and sometimes two days before.

Torticollis comes from two old Latin words: torqueo — to twist, and collum – neck. Torticollis is the name we give to anyone with a twist in the neck, for whatever reason. It is a symptom — not a disease itself.

The list of conditions that can cause torticollis is quite long. His normal neck and spine MRIs and x-rays, coupled with the exams by his orthopedic doctor and at Shriners makes any of the serious causes seem very unlikely.

I have not heard the name intermittent torticollis, but I have heard of benign paroxysmal torticollis, which I suspect is the same thing. Here, the tilting tends to come in episodes caused by muscles spasms — and is usually painful. A spasm can be triggered by a viral infection or by stressing the muscle by position (especially when asleep) or by rapid movement. Some people get spasms when the muscles on one side of the neck get colder than the other — sleeping next to an air conditioner can do that.

One thing that can cause the neck to bend and is often missed is called Sandifer’s syndrome — where kids’ necks bend when they are having reflux (stomach acid sloshing back upwards). This is treated by treating the reflux — not the neck. I believe Sandifer’s syndrome is sometimes associated with hernias.

Episodic posturing of the head to one side may also be seen with seizures. In these cases, anti-seizure medications will often correct the problem. Your doctors will often be able to determine whether these episodes are seizure-related by examining your son during an episode or by performing an EEG— a test for seizures.

If your son’s doctors have diagnosed your son with benign paroxysmal torticollis, physical therapy is the primary treatment. A program of gentle passive stretching exercises can sometimes prevent episodes and get rid of the ‘bentness’ in-between. Ask your child’s orthopedist about seeing a physical therapist to set up a program. In severe cases, surgical muscle release is performed — but with your son’s great improvement, that sounds quite unlikely.

Last medical review on: February 10, 2009
About the Author