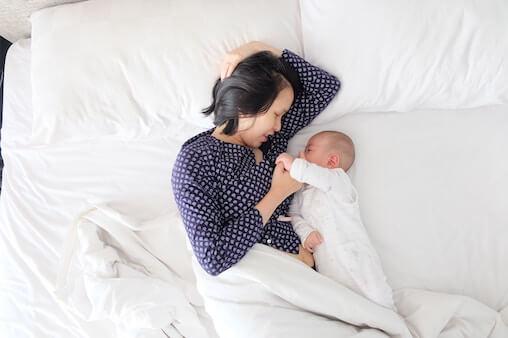 My 3.5 week old baby girl has a few white spots on the insides of her cheeks and lower lip. Is this "thrush"? The spots don't seem to bother her and currently cover less than 5% of the inside of her mouth. Should I worry? Is there any treatment necessary, or is this a normal condition that will disappear on its own?
John - Yokohama, Japan

At your daughter’s age, thrush is the most common reason for spots in the mouth such as you’ve described. Thrush, or oral pseudomembranous candidiasis, is a superficial yeast infection that is found in about 5% of healthy newborns. Infants usually acquire the yeast from their mothers during passage through the birth canal. The yeast is more apt to remain in those infants who abrade the lining of the mouth with prolonged sucking (such as babies who sleep with a bottle or pacifier). Visible thrush begins to develop 7 to 10 days after birth. The use of oral antibiotics, especially during the first year of life, can lead to recurrent or persistent thrush.

The lesions of thrush are white (or sometimes gray) plaques found on the insides of the cheeks, the lips, the tongue, or the palate. If the only symptom is a uniformly white tongue, it isn’t thrush. The plaques of thrush are often described as curd-like. Unlike milk residue, they adhere to the underlying tissue.

Thrush lesions can be quite painful for some children, leading to fussiness and decreased feeding. For other children, there appears to be no discomfort at all. Either way, the yeast sometimes passes through the gastrointestinal system and causes a yeast diaper rash on the other end.

In otherwise healthy children, thrush is a self-limited condition, usually resolving within a month from its first appearance. No treatment is required. Even though it will improve on its own, treatment is often recommended either to alleviate oral discomfort or to treat (or prevent) painful yeast diaper rashes.

Treatment usually consists of an antifungal medicine such as Nystatin suspension. This can be applied, gently, directly to the plaques with a cotton-tipped applicator, or given orally 1-2ml four times daily. Sidney Hurwitz, M.D., in Clinical Pediatric Dermatology, suggests using a cotton-tipped applicator dipped into a mixture of one-fourth teaspoon of baking soda and one or two drops of mild liquid detergent (without ammonia or bleach) mixed in a glass of warm water.

Stronger medicines are available, though usually unnecessary. If the thrush persists, yeast on nipples or pacifiers should be considered as sources for reinfection. Nystatin can also be placed on mother’s breasts; artificial nipples and pacifiers can be sterilized.

Wordsworth says that we come into this world “trailing clouds of glory.” We also come trailing hosts of microorganisms. Even before an infant has completed her trip through the birth canal, she is already being introduced to the complex interplay of different species of life.

Dr. Greene is a practicing physician, author, national and international TEDx speaker, and global health advocate. He is a graduate of Princeton University and University of California San Francisco.
Get Dr. Greene's Wellness RecommendationsSignup now to get Dr. Greene's healing philosophy, insight into medical trends, parenting tips, seasonal highlights, and health news delivered to your inbox every month.
1 Comments
Abby on July 4, 2019

Sidney Hurwitz, M.D., in Clinical Pediatric Dermatology, suggests using a cotton-tipped applicator dipped into a mixture of one-fourth teaspoon of baking soda and one or two drops of mild liquid detergent (without ammonia or bleach) mixed in a glass of warm water. Can I apply this mixture in the baby’s mouth?