Asleep All Day, Up All Night 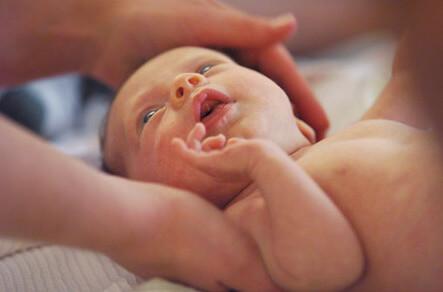 Our beautiful baby daughter is five days old, and we are exhilarated, but exhausted. She seems to be asleep all day long (unless she is eating), and then as soon as we want to go to bed, she's awake - ALL NIGHT LONG! Do you have anything you can suggest?
Nashville, Tennessee

During the later part of pregnancy, each baby develops her own sleep/wakefulness rhythm. You can get a good idea of what this rhythm is by the baby’s activity patterns. Some babies will tend to be fairly quiet during the day — lulled to sleep by the gentle rocking motion as Mom moves about her daily activities. These same babies often begin doing gymnastics in Mom’s belly about the time things get quiet at night. Other babies tend to be active while Mom is active during the day and to be quieter at night. Whatever your baby’s pattern before birth, it is likely that she will continue the same rhythm in the period shortly after birth.

It sounds like your daughter is currently a night owl. Even if you did nothing, this pattern would begin to switch. The strong, inborn clock would begin to set itself according to daylight hours over several weeks. Thankfully, there are effective ways to speed up this process.

Several types of environmental stimuli can alter her internal rhythm. The most powerful wake-up activity is direct eye contact. When your baby locks eyes with you, it’s almost like she’s drinking a double latte — her heart rate speeds up, her blood pressure rises a bit, and she becomes more awake. Babies also tend to become more alert when exposed to bright lights, the sound of conversational speech (they want to know what everybody’s talking about), and having their feet tickled and played with.

When actively trying to switch a new baby’s time clock, have bright lights on in the house during daylight hours. Keep up a steady stream of talking in normal conversational tones around your daughter during the day. Play with her feet often, and make eye contact with her whenever you can.

As soon as the sun begins to go down, purposely avoid all of these things. When you feed her, try not to make eye contact with her. Speak only in whispers or sing-song tones. Sing lullabies. Have the lights dim in the house. And don’t stimulate her feet.

Of course, some daytime naps are appropriate, and your daughter should be awake at night for feedings. The goal is to try to move your daughter’s primary awake time to the daylight hours. By following the above suggestions, her rhythm should change fairly rapidly. Doing this for as little as two or three days and nights will make a dramatic difference. You can help her body learn the rhythm that daytime is for excitement, play, and interaction while nighttime is for cuddling and sleeping.

In just a few weeks you will be looking back at this time with amazement. Was she ever really as small as those tiny clothes that she no longer fits into? She was always able to hold her head up, wasn’t she? Didn’t she always smile back at me? And even then, though you still won’t be sleeping through the night, the all-night play sessions will seem like a distant memory of a magical time before you knew just how wonderful being a parent really was.