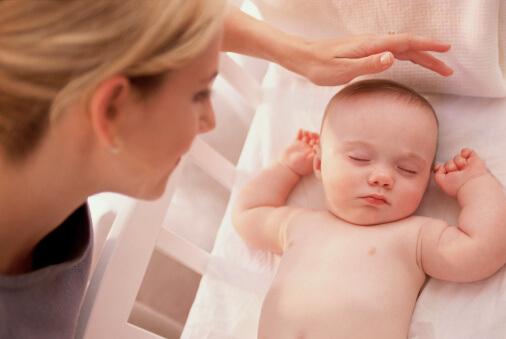 Dear Dr. Greene, If an infant has had a history of childhood apnea to the extent that he has had to use a heart and lung monitor during the sleeping hours for the first two years of his life, and now requires an operation involving general anesthesia, a) Would general anesthesia pose any danger? b) Have you ever heard of a similar case? Thank you.
Hamid Zandieh - Alicante, Spain

I’ll never forget the night my firstborn son came home from the hospital. Earlier that day, while in my arms in the labor and delivery suite, he had stopped breathing for what seemed like an eternity, but was probably about 20 seconds. His face had turned blue. Could it be apnea of infancy? I reported this to those taking care of him, who thought that I was just a nervous first-time parent who happened to also be a medical student with an over-active imagination. They examined him, found nothing wrong, and persuaded me to take him home without a machine to monitor his heart and lungs. They would check him again soon.

That night his mother, my mother, and I took turns hovering over the sleeping form of my precious son. Our nighttime vigil felt interminable. Each breath seemed so precarious — or had I really just imagined that he had turned blue?

Everything went well that night, with no further episodes. In the light of the next day, we brought my son to visit a friend — who was also a professor of pediatrics. While awake in his arms, it happened again. My son turned blue and stopped breathing. Suddenly, everyone was concerned. This led to a flurry of tests. My son was diagnosed with Apnea of Infancy, and went home with a heart and lung monitor, which he wore for nine months.

For a child to take a breath, he needs an open, unobstructed airway from the nose or mouth all the way down into the lungs. He needs properly functioning respiratory muscles. He also needs a signal to breathe, originating in the respiratory center of the brain, and accurately transmitted via nerves to the appropriate muscles. This signal to breathe may be a conscious choice, or may be an unconscious response to the sensors which measure the oxygen content, carbon dioxide content and pH of the blood.

Any part of this pathway may fail to work properly. Sometimes the system may work when a child is awake, but not when he is asleep.

Apnea of infancy is the cessation of breathing for longer than 15-20 seconds, or for any duration if it is accompanied by color changes or an abnormally slow heart rate. This respiratory pause can result from a host of different causes.

In central apnea, the brain’s control of breathing isn’t working. This can be the result of immaturity of the respiratory center of the brain, or of bleeding, drugs, seizures, brain injury, neuromuscular disorders or other problems. In obstructive apnea, the urge to breathe is present, but breathing is mechanically blocked. This can result from upper airway collapse, gastroesophageal reflux, vocal cord spasm, pneumonia, external pressure on the airway, and a long list of other causes.

Testing revealed my son’s apnea of infancy to be a combination of central and obstructive apnea. Rising levels of carbon dioxide in his blood failed to trigger him to take a breath, particularly when he was asleep. Sometimes, when he was awake, his vocal cords would close, blocking his airway. His large tonsils also partially blocked the airway. Eventually he outgrew these problems, and has been quite healthy ever since.

The treatment for apnea of infancy consists of correcting the underlying cause (if possible) or waiting for the child to grow out of it. In the meantime the child wears a sensor connected to an apnea monitor to alert the parents if there is another apnea spell. An alarm goes off if the breathing pauses, if the heart rate drops, if the heart rate is too high, if the sensor leads become disconnected, if there is a power failure, or if the back-up battery is running low. The parents are trained in cardiopulmonary resuscitation (CPR), to help the child resume breathing when a spell occurs.

Once my son was on a monitor, I was able to sleep.

For most children with apnea, the operating room is a safer place to be than almost anywhere else. The child’s breathing, heart rate, and oxygen saturation are continuously monitored. During the operation, adequate oxygen is delivered, and the signal for each breath comes from the ventilating machine. An open airway is ensured by an endotracheal tube. If something were to go wrong, the child is surrounded by the optimal people and equipment to reverse the problem.

The risk posed to your son by general anesthesia will depend on the underlying cause of his apnea. I urge you to discuss your son’s situation both with the anesthesiologist and with your regular doctor. With full information, they can help you weigh the risks and benefits of the operation, and provide the best care — whatever you decide.