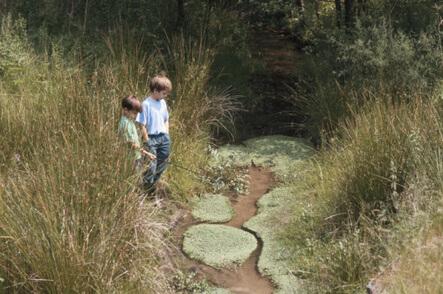 Allergic triggers such as pollen prompt mast cells (frontline defenders of the body) to release a chemical called histamine that sets in motion a cascade of symptoms to repel the invaders. We call it ‘allergies‘ when this response is triggered by something that would not otherwise be harmful for the body.

Antihistamines reduce allergy symptoms by blocking the action of the histamine. These can be very effective, but all of the over-the-counter antihistamines cause some change in kids’ levels of alertness. Most of the time, they produce drowsiness in children (which can be quite welcome — especially at night), but around 5% of kids act hyper instead.

Of far greater concern is the effect of over-the-counter antihistamines on thinking and learning. We know that kids who are experiencing allergy symptoms don’t think or learn or remember as well as kids who are feeling well (Annals of Allergy, Aug 1993). Careful studies have now been performed to determine whether this reduction in learning ability could be reversed by using over-the-counter antihistamines to relieve the allergy symptoms. The surprising results were that even though kids felt better on the antihistamines, their learning abilities were even worse than with no treatment (Annals of Allergy, Asthma, and Immunology, Mar 1996). They’re learning and mental agility is reduced whether or not they are drowsy. When it comes to learning, children are better off congested than drugged. (Better yet is relieving the symptoms in less problematic ways!)

Over-the-counter antihistamines are a reasonable choice for nighttime use, or for an occasional day or two when a child is home from school. I do not recommend them, however, as a long-term solution. Learning –even during play — is too important a part of childhood to blunt with drugs. Some of the prescription antihistamines do not decrease alertness or learning.

Antihistamines are found in almost all allergy preparations that are not specifically advertised as non-drowsy. Diphenhydramine is the most powerful, but it also makes kids the sleepiest (or most wired). Chlorpheniramine and brompheniramine both are a little less potent but have fewer side effects.

Nasalcrom (cromolyn sodium) is an over-the-counter allergy medicine that is more effective and far safer than either decongestants or antihistamines. Nasalcrom is a nasal spray that creates a protective barrier around the allergy cells in the nose so that pollen, mold, dust, and animal dander can’t stick to them. It stops the allergic response before it starts–without causing any drowsiness, irritability, or decreased learning. It doesn’t reverse allergy symptoms that are already present, but prevents new allergen exposures from causing symptoms. Unlike decongestant nasal sprays, this gentle medicine can be used for weeks or months at a time with no fear of rebound effects or addiction.