We know now that handwashing is a powerful preventive. But is it important to use an antibacterial soap? Or might there be a better option for some people? 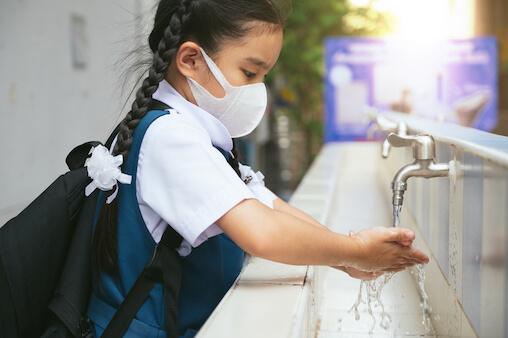 We know that effective handwashing at the appropriate moments is one of the most powerful measures of preventive medicine available today. It is inexpensive, non-invasive, and of great proven benefit.

One hundred fifty years ago Dr. Semmelweis, fresh out of medical school, was a young assistant physician in the maternity hospital in Vienna, Austria. In Europe at that time, mortality rates in maternity hospitals ranged as high as 25 to 30 percent. A postpartum infection known as puerperal fever was the main cause of death. Dr. Semmelweis decided to investigate the cause of puerperal fever, against the strong objections of his superiors who felt that the high mortality rates were normal and non-preventable.

Semmelweis had a friend who died from a wound infection after performing an autopsy on a woman who had died of puerperal fever. His symptoms had been similar to those of the infected women. Semmelweis also noticed that the obstetric mortality rates were highest in the delivery room where students went directly to attend the labor of healthy mothers immediately after dissecting the bodies of women who had died of puerperal fever.

Semmelweis ordered all of the medical students to wash their hands after performing autopsies and before examining living women. This was considered by the students to be unnecessary and burdensome, but they complied. As a result, the mortality rate plummeted to 1.27 percent. Yet Semmelweis lost his job for being a troublemaker.

He wrote and spoke about the importance of handwashing, but was largely ignored. Finally, when a hospital in Pest, Austria, was having a particularly bad epidemic of puerperal fever, they hired Semmelweis to be the chief of obstetrics. He instituted handwashing, the epidemic vanished, and the mortality rate fell to 0.85 percent for the six years that he remained there.

Semmelweis published his findings and sent them to all of the prominent obstetricians and medical societies throughout Europe. The response was outspoken and antagonistic. The steady rejection by the medical establishment of Semmelweis’s appeal to reason gradually resulted in his becoming discouraged, disillusioned, and depressed. He died in a mental hospital at only 47 years of age — of a wound infection.

Now, Semmelweis is a hero of medicine. His teachings on handwashing have been validated repeatedly. The benefit has been proven in obstetrics, in operating rooms, in intensive care units, in doctor’s offices, and in every health care setting. It has also been proven to be powerfully effective in preventing common infections in healthy children at home and at school.

The Power of Handwashing

Children who wash their hands effectively have fewer visits to the doctor, take fewer antibiotics, need fewer prescription medicines, have fewer illnesses, and miss less school than their counterparts. This has been demonstrated repeatedly. Schools with regular handwashing programs have measurably fewer infections in their students than schools with sporadic handwashing. Schools without handwashing routines have large amounts of fecal bacteria detectable on classroom floors and carpets.

What does it mean to wash effectively? Children (and adults) must be taught to wash their hands at all of the critical moments. These include washing after defecating, after handling diapers, before handling food, before eating, and before feeding children. They must also wash with water and a cleansing agent — not water alone. Even washing with ashes and water, or soil and water, has been proven to be more effective than washing with water alone.

One alternative to handwashing with soap and water is the use of alcohol-based hand rubs. These are now becoming widely available in doctor’s offices and hospitals. Recent studies suggest that they are just as effective as handwashing with soap and water (Stout et al: Clinical effectiveness of alcohol-based products in increasing hand hygiene compliance and reducing infection rates: a systematic review. J Hosp Infect, 2007).

For children who are prone to impetigo, boils, or pimples, I would recommend using an antibacterial soap. I would also recommend it for people who are exposed to a great many infectious diseases (I use it in my office). For others, I would recommend a gentle cleanser such as Dove, Alpha Keri, Aveeno, or Cetaphil, to avoid dry or cracked skin.

Far more important than the choice of soap is consistent, thorough handwashing. Let the legacy of Semmelweis inspire you to give the gift of handwashing to your children, rather than additional rounds of antibiotics. It does take a little work, but far less than the work it would take to take care of your children during the infections you will instead prevent.