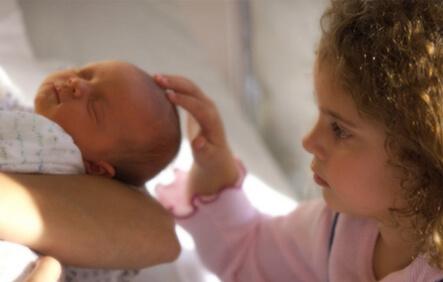 My son has the biggest anterior fontanel I have ever felt (I have felt thousands!!!!!). My pedi says he is not too concerned. I am not either, but my doctor does make me nervous by telling me he wants me to report ANY developmental lag to him right away. On one hand he is blasé, then he turns around and sounds alarmed. I am really confused. It measures 3 inches front to back, 2 5/8 inches across. My baby is 6 months old and his head is growing fine (75th percentile across the chart), he is starting to sit, rolls all over, reaches etc. Am I driving myself crazy worrying for nothing???
P.S. I chatted with you in chat the other day!
Alex Sweeney RNC - Pediatric Care Coordinator - Ormond Memorial Hospital - Ormond Beach, Florida

How crazy-making! The message you are left with is, “Don’t worry, but your son might be developmentally delayed — and it’s your responsibility to pick up on the clues.” No wonder you feel the way you do. Before I answer your question, Alex, I want to tell readers who don’t have your training a little about the anterior fontanel.

The anterior fontanel, or soft spot on a baby’s skull, is a cause of concern for many parents. Elsewhere, the baby’s brain is protected by a wall of bone; here only soft, squishy tissue separates the brain from the traumas of the outside world. The soft spot seems so vulnerable. I spoke with a mother today who had never touched her son’s soft spot — she was afraid she would put her finger through it.

In truth, the soft spot is another example of the amazing design of the human body. At birth there are six soft spots, but only two are noticeable (the largest, up on top, is the anterior fontanel). The loose connections of the skull bones that intersect in the soft spots make labor and delivery possible. Without this flexible anatomy, either human babies would have to have smaller brains or human mothers would have to have wider hips if any babies were to be born.

The value of the soft spot isn’t gone when you first hold your baby in your arms. Far from making the baby more vulnerable, the soft spot protects a baby from injury. True, it makes some uncommon accidents more dangerous (landing head first on top of a car’s radio antenna), but for the common falls experienced by all babies, the soft spot cushions and protects — making the skull function rather like a football helmet.

Every week, frantic parents rush into my office after their babies have fallen off a bed or table or highchair. It happens so quickly, babies can fall even with careful and attentive parents — it’s even happened to me, but don’t tell :^). When babies fall, they usually land head first, since their centers of gravity are in their heads (adults’ centers of gravity are in our bottoms). The head hits the floor with a terrible, ripe-melon-like “thwunk.” Thanks to the cushioning of the soft spot, most of these head injuries are quite minor. And by the way, although the spot is soft, it actually consists of a surprisingly tough fibrous membrane.

At birth, babies’ soft spots come in a very wide range of sizes. If the soft spot is small, it will usually enlarge over the first several months. Conversely, large ones tend to get smaller. By the time a baby is 2 months old, the anterior fontanel is usually about 1 and 1/4 inch across (actually one by one and a half inches), +/- 3/4 inch (Journal of Pediatrics, 80:749, 1972). A persistent, larger anterior fontanel is usually completely fine, but is sometimes associated with a variety of uncommon disorders (list adapted from Nelson Textbook of Pediatrics, Saunders, 2007):

Alex, when your pediatrician said everything was probably fine, he was right. He is also right to be vaguely concerned that large anterior fontanels are sometimes associated with certain syndromes, some of which (like the trisomies) involve developmental delay. Now you know what these syndromes are. The serious ones have already been ruled out. Even the mild ones are very unlikely in your thriving son. I would relax and enjoy your son, who is just starting to sit. Soon he’ll be moving across the floor. For most kids, the anterior fontanelle closes not long after they get steady on their feet (at 9 to 18 months). It stays open just long enough to protect them as they stumble their way toward walking on their own. How quickly it all goes!