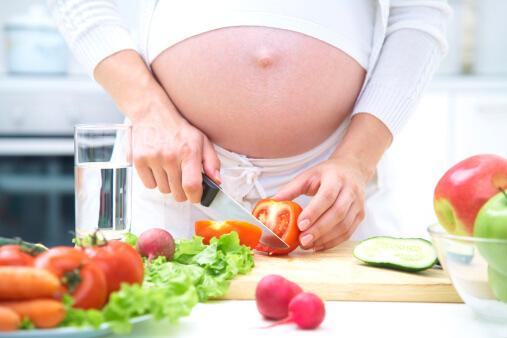 What Mom eats during pregnancy appears able to help protect her kindergarten-aged child from asthma and eczema. A little over ten years ago, researchers at the University of Aberdeen proposed that the recent dramatic increase in asthma and related conditions in affluent societies might be partly do to the decline of antioxidants in the diet. To study this idea further, they followed 1861 children beginning even before they were born. The mothers’ diets during pregnancy were analyzed by survey and by blood levels of antioxidant nutrients such as vitamin E and zinc. At 5-years old, the children were evaluated by parental questionnaire, objective breathing tests, and skin-prick testing. The latest results appear in the September 1, 2006 American Journal of Respiratory and Critical Care Medicine. The higher the level of vitamin E in the mothers’ diets during pregnancy, the lower the chance that her kindergartener had wheezed in the last year or had ever had asthma. Children born to mothers who had the lowest vitamin E levels were more than 5 times more likely to develop asthma than those whose moms had the highest vitamin E levels. Similarly, the higher the mothers’ zinc levels during pregnancy, the lower the chance that her 5-year-old ever had asthma or eczema. The protective effects of vitamin E and zinc appeared even stronger in those children who had been breast-fed. They appear to help both the developing immune system and the organs themselves. This is exciting support for the role that good nutrition can have during critical windows of child development.

This study does not offer support for the idea of simply relying on vitamin E or zinc pills (though I do recommend taking a high-quality prenatal vitamin – especially one with vitamin E derived from food sources). The study does suggest, though, that eating foods rich in these antioxidants could have a powerful and lasting effect. Great sources of vitamin E include sunflower seeds, spinach and other greens, papaya, olives and olive oil, broccoli, blueberries, and kiwifruit. Look for zinc in foods like lean meats, sesame seeds, pumpkin seeds, yogurt, green peas, spinach, and mushrooms. Just listing these foods is getting me in the mood for a great salad and a bowl of fruit. Isn’t it wonderful that real foods (as opposed to junk foods) offer such profound immune, skin, and respiratory benefits?